Do I Dare To Eat a Peach? Food and Desire in Call Me By Your Name 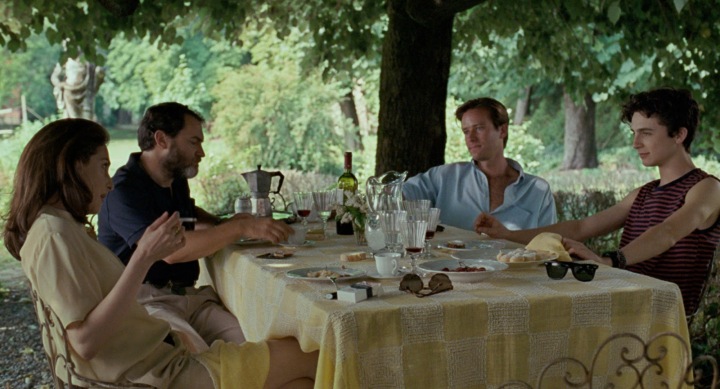 “I know myself,” Oliver announces in the early scenes of Call Me By Your Name. It is the same proclamation (tinged with arrogance? With adulthood?) that he will utter after his first kiss with Elio, urging the latter toward restraint. But this first time, he is not talking about love–he is talking about an egg. After messily smashing and wasting one boiled egg, he has inhaled a second in less than five bites. He can only have the one, he tells Annella, or he won’t be able to stop. He has already demonstrated a natural inclination toward overzealousness–the remnant shell and ooze of his demolished first attempt visually underscoring his point–and he knows that only the active practice of restraint will allow him to reap its reward. The camera cuts to Elio’s face–surprised, intrigued–as he ponders Oliver’s pronouncement, and he notices the Star of David necklace flashing against his skin. Ah, he is like me, Elio’s expression seems to say, but do I know myself?

Call Me By Your Name is a film filled with food. Linen-clothed tables sag under the remains of sumptuous breakfasts, and there is always someone coming for dinner. Characters eat, and they eat with gusto, scampering away from a volleyball game to pick fruit from the orchards or while discussing politics in the kitchen, folding ravioli and eating it raw. Communal moments happen around the table; in fact, one of Elio and Oliver’s first interactions involves the latter’s initial rejection of the custom. He is sprawled on the bed (Elio’s bed) and casually groans that he’s decided to skip dinner. “Will you make an excuse for me to your mom?” he asks Elio, his tone implying he already knows the answer. One does not skip dinner in the Perlman house, yet matter how much Elio tries to hide it, he is interested in this stranger, and will deliver the message. They have collaborated in this act of deception; they are on the same side. On one of Oliver’s first days, Annella brings him apricot juice. Again, Oliver drains the glass in a matter of seconds. Professor Perlman uses this moment for an etymological lesson hinging on the root of the word “apricot.” Oliver corrects him, arguing that instead of the Arabic, the root of apricot comes from Latin praecocum–the same that has given us “premature” and “precocious” he clarifies, his eyes shooting to meet Elio’s. Elio is intrigued by this newcomer’s confidence, Oliver’s tacit (if perhaps patronizing) acknowledgement of his presence. Still, he relishes in gaining the upper hand, remarking “He does this every year,” when Oliver passes Professor Perlman’s test. You may think I’m just a child, Elio challenges, but this is still my home, and I know more about it than you do. My mother brings apricot juice to all the students, you, Oliver, are not special.

Though Oliver may not be particularly special as a pupil, it is becoming ever clearer that he is special to Elio. Oliver ducks out of another dinner, and though Elio has started by criticizing Oliver’s maddeningly casual goodbyes (“Later!”), when Annella signals Mafalda to take Oliver’s plates away, Elio reacts as if he’s been betrayed. He quickly rearranges his expression, however, and slides his chair into Oliver’s empty place, as if he wants to inhabit the body for which the space was reserved. Later that night, belly full, he will sulk. By not joining the family for dinner, Oliver has left it unclear whether he wants the same thing.

A morning soon after, the camera focuses on Oliver eating another egg, cracking it himself this time, lingering on the slow orange overflow of yolk as it drips down the side of the cup. It is messy, uninhibited, and thus, it is almost sensual. Elio’s next statement solidifies this reading. “We almost had sex last night,” he announces, waltzing in as the focus zooms out to take into account the entire scene. He is talking about Marzia, his teenage swagger masking insecurity. Oliver sees right through, though, and offers his advice. It’s better to have tried and failed, than not to have tried at all, he says, echoing the chivalric knight’s words that will become Elio’s own guiding principle just a few scenes later: it is better to speak than to die. Better to break eggs than to avoid their richness altogether. 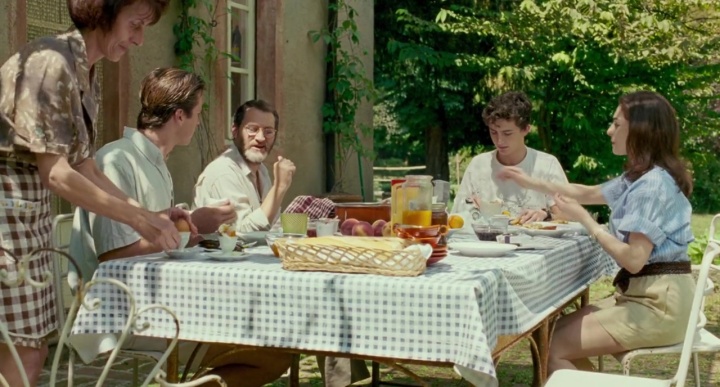 While it may be better to speak and to eat, restraint is still required. At least, according to Oliver. At the monument of the Battle of Piave, Elio declares his love and on the grassy banks of his favorite river, they kiss. Oliver pulls away quickly, telling Elio “that’s enough.” Having gotten a taste, Elio is ravenous, and he leans in for more, which Oliver briefly indulges before insisting they must stop. “I know myself,” he says again. Again, he implies that he knows how to control his appetites, that once he, like Elio, was prone to devour. This is not to say that restraint is easy for him, just that he is more practiced at controlled release, and Elio is not. At lunch after their tryst, Elio takes one bite of dessert–a chocolate mousse topped with fluffy whipped cream sweet like summer air–before dropping his spoon with a clatter. He is bleeding. His overindulgence has had consequences. As he fumbles through first-aid, food still features–the only thing he can find to ice his nose is a packet of frozen chicken. “I’m a mess,” Elio groans when Oliver checks on him. “The kitchen table sure is,” Oliver retorts and begins to rub Elio’s feet. In this case, Elio’s craving has ended with blood, but also with care and the budding of love. 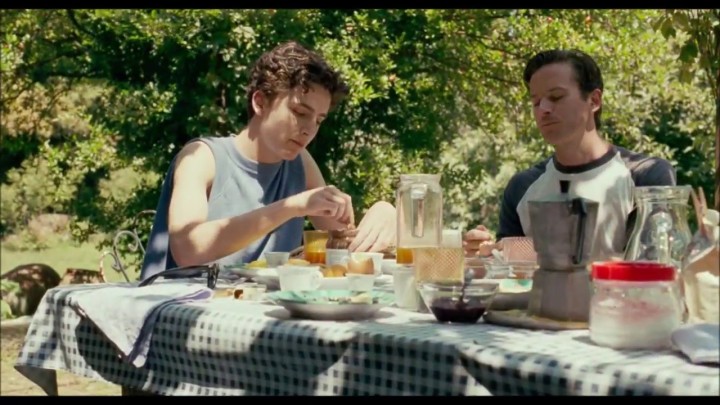 Those buds bloom. As Elio and Oliver’s relationship deepens, they ease more frequently toward release, leaving the restraint of their first encounters behind. This shift reaches its peak when Elio picks a peach. Taking it up to his attic hideaway, he scoops out the pit and fucks it–deep pleasure followed by immediate, overwhelming regret. Just a few scenes earlier, in town, Oliver had asked Elio if he had made him regret anything. “I hate the thought that I might have messed you up,” Oliver frets, and this time, it is Elio who soothes. He regrets nothing of their time together, he is perfectly fine. Yet, here he is, with peach juice drying on his skin, feeling anything but all right. Oliver soon finds him, and instead of disgust, reacts with bemusement. He even tries to eat the peach–the most profound, over-the-top gesture of acceptance he can make and a signal that, finally, he is all-in–before Elio knocks it out of his hand, pain playing across his face. Elio collapses into Oliver’s lap and sobs, having exercised so much restraint in concealing his deep shame for what he’s just done that it must be released. His face buried, he says what he’s really been meaning to say this entire time. He doesn’t want Oliver to go.

But go, he must. Oliver and Elio take a trip to Bergamo, one in which Elio–ever hungry– demonstrates his voracity before vomiting, this time from too much alcohol. Still, Oliver kisses him and holds him up as he expels his dinner into a fountain, and in their last moments together, they are all release. Oliver sings and dances in the streets and hugs Elio, in full view, at the train station. But still, he must return to America, and Elio must stay behind. The summer is ending. When winter comes, in the final scene of the film, it too, comes with food. As Elio stares crying into the fire, Mafalda and Annella are setting the table in the background. It is Hanukkah, and the Perlman’s are having latkes for dinner. Elio has loved and lost; he has lived, and he will keep on living. And to live, we must eat. 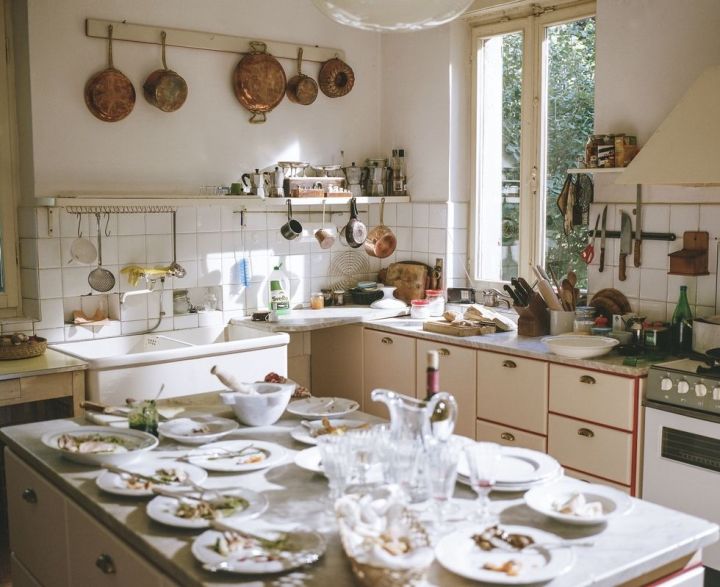 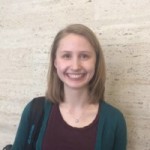 Anna Harvey studies history and English literature at Brown University. According to her mom, her favorite genre of film is prettily shot period dramas, with characters who stare into misty landscapes and romantic leads who (probably) die in the end. This is largely true. She’s also a huge fan of Little Miss Sunshine, Captain Fantastic, the 1994 Little Women, and basically anything involving Greta Gerwig. You can find her on Twitter at @annaeveh

Tagged as: anna harvey, call me by your name, Luca Guadagnino