Criterion Month is a massive collaboration across 5 websites in honor of Ingmar Bergman’s 100th birthday and of the films of the Criterion Collection.  We hope the celebration of this incredible director -and these classic films – inspire others to find new cinema they love and share their discoveries with others.

“What I don’t know can’t hurt me”, protagonist Mike Hammer (Ralph Meeker) naively assumes at the beginning of Kiss Me Deadly (1955). In a film noir, it is precisely this assumption which allows femmes fatales to be as dangerous as they are. Reduced to spectacle, dismissed as unknowable, these women can act undetected under the gaze of men who can never see them beyond their assumptions and beyond their physical surface. In this peculiar space, protected by their status of unknowability, women in film noir have a privileged access to “the great whatsit” that propels the narrative, which makes them unassumingly deadly. This pattern becomes self-reflexive in Kiss Me Deadly (Robert Aldrich, 1955), often pinpointed as the final true film noir, because of the way in which it exposes, mocks and deconstructs the expectations related to the genre and ultimately (and literally) sets them on fire. In Kiss Me Deadly what men don’t know can, indeed, hurt them. 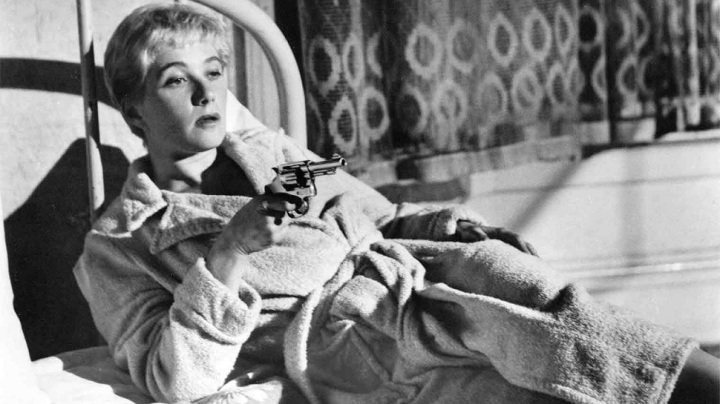 The pseudo-femme fatale in question is introduced rather late in Kiss Me Deadly, when Mike Hammer, during his investigation of the unknown reasons that caused the death of a woman named Christina, finds a lead that takes him to her supposed roommate: Lily Carver (Gaby Rodgers). The first image we see of her is shot from the back, which allows us to see only the back of her head and one exposed leg, our vision partially obstructed by the bedframe. This image is immediately establishing both her unknowability, enhanced by the camera angle, and her unmistakably feminine sexuality, resulting in a voyeuristic look at a woman caught in a private moment, reading a newspaper in her bed. Moreover, when Mike knocks on her door, we see her extracting a gun, definitively signaling her dangerous nature. Mike, however, seems unimpressed, as he proceeds to invade her space by sitting on her bed without invitation, and listening to her story about her relationship with Christina, which we will later find out to be a lie. Something interesting happens in this scene: during the course of their conversation, Lily appears to be more and more innocuous, as opposed to the first image we see of her as a mysterious, armed, potentially dangerous woman. The film first exposes her potential dangerousness to the viewer by showing her alone, then it assumes Mike’s perspective as he comes to believe her lies, accept her as an ally, and even protect her by offering her, later in the film, a place to stay in his apartment. And yet, despite her success in this sense, as we learn that this was her plan all along,  Lily fails in the ultimate mission of the stereotypical femme fatale, that is, seducing Mike.

In fact, despite her attempts and her explicit invitations, Mike pushes her away when she kisses him, first intrigued then suspicious, as if he senses that she is hiding something. Her performance, costumes and framing give us some clues as to why this might happen: at this point, Lily is not a femme fatale yet, but she needs to act like one in order for her plan to work. The first times we see her, she is naked, only covered by a robe, but she is not using her nakedness to seduce Mike (yet): in the first scene, she is constantly moving away from him, shielding herself behind her gun, closing her robe around herself and tying its belt tighter, closing Mike out. By doing so, she posits herself as a mysterious and contradictory object, her physical actions opposing the fact that she is opening up through her speech. This demonstrates her fundamental understanding of the mechanism of seduction in film noir: in fact, despite telling Mike that she does not know anything, he is intrigued enough to come back for her, because she represents the unknowable, the only partially visible. Nor does she ever become visible. The visual, scopophilic pleasure in the film is mostly assigned to Velda, Mike’s secretary, whom we often see partially naked, attempting and succeeding at seducing Mike. Lily is trying to resemble an echo of that kind of sexuality, but never really succeeds. In her actions, we can see a pattern: first, posit herself as mysterious and intriguing; second, get closer to Mike and seduce him; third, obtain her object of desire, i.e. the box. She fails the second step because she clearly appears to be reciting a role. Her actions appear crafted, her delivery of lines is mechanic and emotionless, weirdly detached. Mike picks up enough to reject her, but not enough to wonder why she is acting in such a way. He simply dismisses her as yet another mystery, one that may be helpful to him in his own quest, but not worthy of being investigated further.

It is in this space that Lily (whose real name, we learn at the end, is Gabrielle) can pursue her own interest. Since Mike is not making the effort to actually know her, she is not seen, and she can act undetected. In the end, she steals the mysterious box with Doctor Soberin, and kills him when he tries to keep her from opening it. Soberin, too, dismisses her: in a condescending speech, he associates her with Pandora, using the myth as a cautionary tale, mocking her. He is referencing the myth in its stereotypical associations, those between woman and danger, woman and curiosity, woman and destruction. Gabrielle’s act of opening it, however, reads as a feminist, defiant act: her decision to open the box despite the numerous warnings can be read as the fulfilment of Gabrielle’s quest for knowledge, which has been denied to her so far. In the words of Laura Mulvey, “her desire to see inside the box can be re-represented as a self-reflexive desire to investigate the enigma of femininity itself”.[1]

Woman has, then, a particular relationship with the unknown, and the invisible. Both are perceived (by men) as unattainable, both are believed to be harmless only insofar as they are not known. Gabrielle can open the box only thanks to this relationship but, by doing so, she also highlights the faults of this logic. Men’s desire to distance themselves from the unknown proves to be ultimately fatal. When the box is opened, it reveals what appears to be a destructive nuclear weapon, which burns down the house it is in along with Gabrielle. The images of her burning as she keeps the box open are haunting and suggestive: she is literally merged with it, unable to look away or to close it, screaming as she is performing the ultimate sacrifice by destroying what has come to be the symbol of ‘unknowable’ femininity. If we equate femininity with the mysterious box, its ultimate destruction places the site of danger not onto the woman or the box herself, but onto men’s dismissal of them. Gabrielle’s rebellious act is facilitated by men’s refusal to see women, which is what ultimately proves to be destructive. And Gabrielle herself can be read as a modern Pandora, insofar as she exploits her image of unknowable femme fatale to conduct their own investigation and pursue her own interests.

By opening the box, she is making sure to be seen, and at the same time she is exposing and destroying the convenient association between woman and unknown. At the same time, she is setting on fire an entire genre, which will never be able to recover from the destructive ending of Kiss Me Deadly and will cease to survive in its purest, naïve form after 1955. The femme fatale as a stereotype still exists, but the revolution sparked by Gabrielle survives in the self-reflexivity of certain modern femme fatales: ‘I’m not bad, I’m just drawn that way’.

[1] Laura Mulvey, “The Myth of Pandora: A Psychoanalytical Approach” in Feminisms in the Cinema ed. by Laura Pietropaolo and Ada Testaferri (Bloomington: Indiana University Press, 1995), p. 11.

Marina was born and raised on a little island in the south of Italy, which she left for the considerably larger island of Britain in hopes of finding better cinemas and a degree in Film Studies from King’s College London (she got both). Her taste in films is easily influenced by the amount of pastel pink in their production design and the presence of her heroine Greta Gerwig. Some of her favourites are Before Sunrise, The Royal Tenenbaums and Frances Ha. You can find her raving about Paddington 2 on twitter at @sobmarina_ , posting too many sunsets on instagram at @humandisasters and logging Call Me by Your Name too many times on letterboxd at @sobmarina_ .