REVIEW- The Stanford Prison Experiment: On psychology, sanity and morality 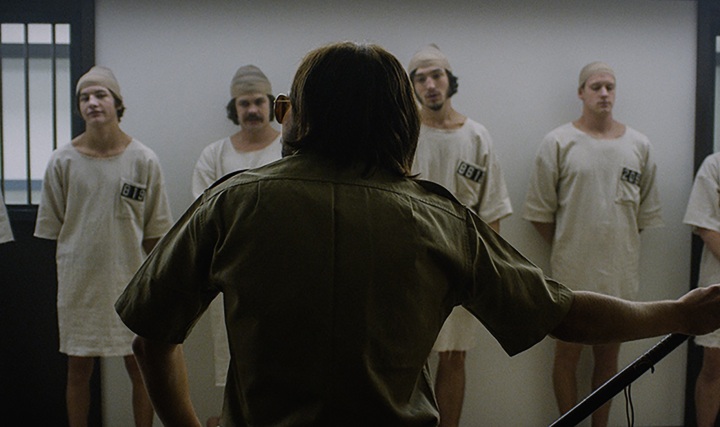 If you’ve ever taken a psychology class, chances are you know about the Stanford Prison Experiment conducted by Professor Philip Zimbardo in 1971. The experiment that revolutionized psychology took twenty-four undergraduate students at Stanford University and placed them in a mock prison in the basement of one of the university buildings. Half of the students were to be prisoners and the other half, their guards. The goal of the experiment was to test whether the abusive behavior of guards in prisons was due to the sadistic personalities of the guards or if placed in a prison environment, anyone could behave in such an abusive way, even young, innocent undergraduate students.

Kyle Patrick Alvarez’s film is a dramatization of what went on in the makeshift prison that led the experiment to have such daunting results. The film picks up with Zimbardo’s graduate staff interviewing the potential prisoners and guards, all young men in their 20’s, each driven to participate by the $15 an hour pay, none of them wanting to be a guard. When asked why, Michael Angarano’s character who also ends up being the most abusive of all replies “nobody likes guards.” with a shrug of a smile.

The first prisoner we are introduced to is 8612, portrayed by Ezra Miller. As the guards lead him into the prison they are noticeably nervous and unsure of how to enforce the rules given by Zimbardo and his team. The prisoner is symbolically stripped of his identity, given a sort of dress looking sack to feminize him, and a number to be referred to rather than his actual name. As soon as the guards realize they can do almost anything they want to the prisoners (except hit them) they start to get really comfortable in their roles. It’s almost like they’re actors playing guards in some low budget prison movie. One guard (Angarano) even goes as far to put on an accent that earns him the nickname John Wayne, putting on a performance only to be seen by Zimbardo and his staff who are watching the experiment unfold through cameras all over the prison.

As things begin to quickly intensify, a lot seems to be happening all at once; the prisoners are begging to be set free, they’re acting out as best they can, having mental breakdowns and losing their sanity. From their and the audiences perspective it seems like they’ve been imprisoned for months but much to our horror, we’re surprised to see a title card appear on screen, letting us know that it’s only day two of the experiment. The experiment that was supposed to last two weeks was shortened to six days as the prisoner’s began to believe that they were really trapped and could no longer handle the guards’ abuse.

Billy Cudrup plays Zimbardo and faithfully demonstrates his frustration dealing with the morality and ethics of the experiment. The rest of the ensemble cast shines and work extremely well together, especially Angarano and Miller as the most abusive guard and the most rebellious prisoner.

Shaianne is an 18 year old student from New York, currently at university in London. She is a stand up comedian, but only in her dreams and her obsession with Twin Peaks will most likely be her downfall. Her infinite list of favorite films include The Virgin Suicides, Donnie Darko, Fight Club and everything Wes Anderson has ever made. Watch her tweet embarrassing declarations of love to members of One Direction here: @shaialabeouf

A Love Letter to Anya Taylor-Joy

‘Pandemic: How To Prevent An Outbreak’ is a Much-Needed Dose of Hope and Understanding

‘Celebration’ is the Final Curtain for Yves Saint Laurent