There are common tropes in horror with women at their centre, some of the most popular being ‘The Final Girl,’ ‘Demonic Impregnation’ and ‘The Damsel in Distress.’ Too often, horror resorts to using negative tropes to represent disability as something frightening and grotesque, even going so far as using disability as the scare factor. One such example is ‘The Shut-In,’ this trope typically features a person with agoraphobia or a physical condition that prevents them from leaving the house, which leads to them being terrorised in some traumatic and/or deadly fashion. Disfigurement is also used as a means for the viewing audience to be revolted and experience terror. As you can see, these tropes are both harmful and incredibly reductive. There are also tropes that seem positive at first glance, but are no more than inspiration porn. Even when researching this article, I found a trope called ‘The Handicapped Badass.’ This trope claims “In real life we know how hard it is to accomplish death-defying feats in perfect health and condition, so anybody that does it with a handicap instantly earns our respect… Handicapped? Perhaps… Disabled? Far from it!” The description of this trope alone shows its ableism; rather than being a positive portrayal of disabled people, it puts us on some strange pedestal where we’re expected to be inspiring “super crips.”

As a disabled horror fan, I find these narratives harmful and lazy. Films with positive disability representation are so important for both disabled and abled people alike. It is vital that disabled people have positive portrayals of disability in media, because this has the ability to influence people’s perceptions, rather than leading abled people to believe disabled people are monsters, or less than in any way. 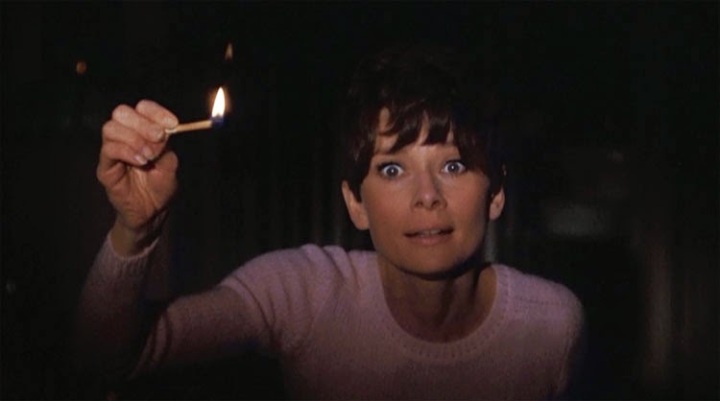 This film stars Audrey Hepburn as a blind woman, and inspired the next film on my list. Susy faces home invasion after a large amount of heroin is hidden inside a doll which her husband was accidentally given as he was leaving the airport. The other characters take advantage of her blindness while trying to break into her home to steal back the drugs, even pretending to be policemen, detectives and friends of her husband, who is out of town.

Susy has a few qualities which clue us into her being a final girl, for example, she begins to notice something isn’t quite right early on. She is also intelligent, methodical, and determined. With the help of a young neighbour, she realises the men are lying to her, they aren’t actually detectives, and are trying to break into her home to steal the drugs.
So she makes an “even playing field” breaking all the light bulbs and throwing chemicals in the intruder’s face, which temporarily blinds him long enough for her to stab him.
This movie was one of the first horror films I saw as a child and it was incredibly frightening. Watching it today I was impressed by the disability representation that occurred in 1967, and as a disabled horror fan, I’m glad to see this important classic inspire another modern horror film with positive disability representation…

Inspired by the aforementioned film Wait Until Dark, and co-written by starring actress Kate Siegel, Hush features a deaf woman as the main protagonist. Living alone, deep in the woods and with few neighbours, Maddie is working on her novel. Hush is unique as it has parts of the film from Maddie’s point of view, including the lack of sound she experiences as a deaf woman.

This film quickly becomes unsettling when Maddie’s only neighbour, Sarah, is killed just outside her door. Sarah knows Maddie is unable to hear her as she is being attacked, so she desperately tries to get Maddie’s attention – but she is inside cooking and completely oblivious to what is happening just a few feet away from her. The masked killer quickly realises Maddie is deaf when she does not respond to Sarah’s pleads for help. He taps on the glass, smirking as he realises she does not hear him. Discovering she is deaf leads the killer to believe Maddie will be another easy kill, and he begins preying on her like a cat with a mouse. He sneaks into her home to steal her phone and begins sending pictures of Maddie to her computer. As Maddie realises there is someone watching her, she begins locking all her doors and trying to contact someone for help with her computer. At this moment the killer cuts her power and telephone lines – completely isolating her from anyone else’s help. This initiates a power struggle which goes back and forth throughout the movie. Eventually, the killer finds a way inside, and I felt punched in the gut as a viewer, sure that this was the end for our protagonist.

It appears that Maddie has passed out in the kitchen, but as the killer approaches her, she overpowers him with the element of surprise, grabbing a can of wasp spray and temporarily blinding him. Maddie outwits him, using her disability to her advantage in the end – a brilliant example of how disabled people adapt! 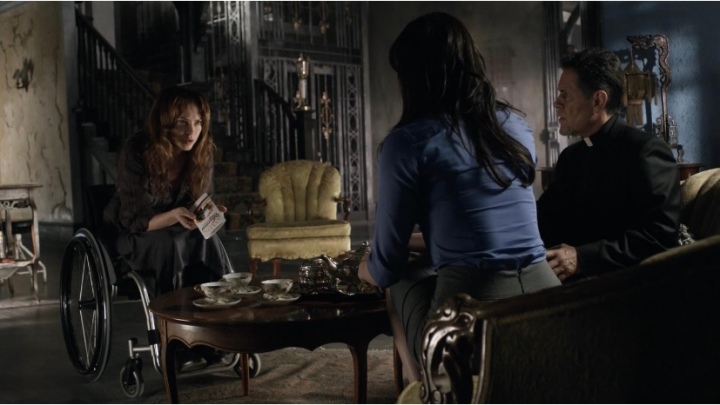 Curse of Chucky stars Fiona Dourif as Nica. It is the sixth film in the Child’s Play franchise, and offers a very positive portrayal of disability representation and self-advocacy. Nica is a young paraplegic woman who uses a wheelchair and lives at home with her mother.
From the beginning of the film, you can see Nica self-advocate in many situations, such as when her mother makes her feel like she can’t be a sexual person due to her disability, or when her sister Barb doubts that she can safely live alone.

Things quickly take a turn when a mysterious package is delivered to their house, of course containing a Chucky doll. Nica is suspicious, and later that night her mother is killed, which prompts her sister to stay as she assumes Nica is unable to care for herself.
In the days that follow, Barb frequently makes condescending remarks to Nica regarding her disability. Barb tells Nica not to overextend herself, while insisting she move into an assisted care facility, not caring what her sister wants. Nica replies by saying, “Don’t you think I’m the best judge of when I’m overextending myself? I am not a child, I am perfectly capable of taking care of myself,” which is something probably every disabled person has said or thought at least once in their life.

The cinematography is very effective in making the viewer anxious as Chucky kills off Nica’s family one by one. In the final scenes between Chucky & Nica, Chucky tries to maim her by taking an axe to her legs, but she has no feeling in them (we as viewers discovered this earlier in the movie). When this happens she is able to take back the power from Chucky by catching him off guard, and she uses her wheelchair to block him and then strikes him, knocking him out. She pries the axe from her leg, and when Chucky lunges toward her she uses it to knock his head off, seemingly putting an end to their struggle. Of course Chucky can’t be killed so easily, and comes back with a crude joke about being the last one standing, as he stabs at Nica who is able to grab the knife away, regaining the power in this situation again. She says “You wanna play motherfucker? Let’s play,” and then drives the knife into his back but not before he gives her an almost identical scar to the one on his own face.

At the end of the movie, when the police come, they assume Nica has killed her family because she was holding the knife. In court she is declared incompetent and criminally insane, which is not how I would have preferred this overall positive representation of disability end – but she shouts and giggles that she’s still alive, so in my eyes, she’s still the winner. I haven’t watched Cult of Chucky yet but I’m interested to see if it redeems this ending. 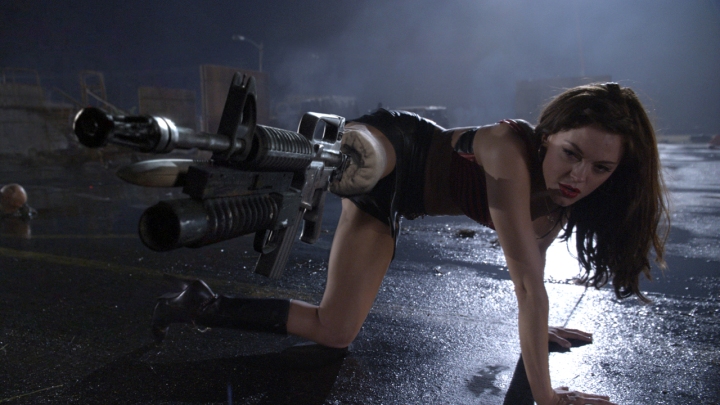 After being attacked by zombies, Cherry wakes up alone in her hospital room, and realises her leg has been amputated above her knee. Cherry chokes back tears and vomit, allowing the viewer a look at the vulnerability of being disabled, and how difficult it can be to accept a disability when you’ve previously lived as an abled person. Her lover, Wray comes to her rescue as the zombies wreak havoc on the hospital and other parts of town. I appreciate the dialogue here of Wray telling Cherry not to cry over spilt milk. This doesn’t come off as callous, instead, it feels like he’s telling Cherry she still has what it takes. He even makes a prosthetic leg out of a table leg, and asks Cherry to do him a favour: stay strong. She asks, incredulously, “Stay?” to which he replies “Yeah baby, stay.” Later in the movie, there is a sex scene with Cherry and Wray. Although it seems pretty unlikely you’d be able to have sex hours after amputation surgery, this scene was an excellent portrayal of disability and sensuality, showing that disabled people are still sexual beings.

Overall, these films contribute a positive portrayal of disability in horror, where all too often disability is used as a scare factor or is synonymous with evil. These representations allow viewers to see disability in a more positive light than typically seen in horror films, as these protagonists are able to adapt to their individual trials and use their disability to their advantage in order to survive. Moreover, disability representation in these films shows that disabled people are normal people with normal desires, not something to be frightened of.

I hope to see more positive disability representation in the future. Casting actual disabled people in these roles and consulting with disabled people, as was the case in A Quiet Place, is a great start. All horror fans deserve to be able to watch a film without seeing themselves vilified.

Jess Jasper Blair is a disabled dyke hailing from Ohio and writing at the intersections of disability, sexuality, gender, fashion and representation. Their favourite films include Halloween and Legally Blonde. If you asked them who the greatest storyteller of our time is, they would tell you it’s Shonda Rhimes without hesitation. You can find them on twitter @cultofthecat, and instagram @_jjblair

‘Network’, Scorsese, and Making Cinema in an Age of Content

“I’m Leaving It For Us To Be Curious About”: Challenging TV Norms Through First-Person Titles