Monstrous Womanhood and the Unapologetic Feminism of ‘Midsommar’

It comes as no surprise that Midsommar, the second feature film of director Ari Aster (Hereditary), is packed to the brim with explorations of internal horror and grounding realism blended with the bizarre and bloody. Upon viewing the film, some themes present themselves instantly: empathy, family, and an interesting meditation on toxic − as well as symbiotic − codependency. However, I would argue that the lifeblood of Midsommar exists in a less obvious element: the film is radically feminist and, beyond that, a celebration of the very base and primitive ideas of womanhood.

In Midsommar, a couple in turmoil and on the verge of break-up travel to Sweden with their friends to experience the midsummer festivities of a rural commune. What begins as an idyllic retreat quickly devolves into an increasingly violent and bizarre competition at the hands of a pagan cult.

In Aster’s filmography thus far, he has shown a surprisingly effective aptitude for being able to inhabit the most sacred and distinct aspects of womanhood. Hereditary, for example, is just as much a film about motherhood and all its anguish and compromising dichotomies as it is a film about family trauma and the occult. Hereditary goes beyond widely relatable horror by touching on uniquely female experiences and expressing them in a way that speaks to primitive womanhood. Midsommar is no exception.

I would argue that the crux (one could say womb) of the film is the coven of womanhood and the ways that women uniquely support one another and express themselves. It’s often heard in the cultural zeitgeist, for better or for worse, that women are more emotional. That notion is nurtured and celebrated in the film and, ultimately, is a source of immense power for the women of Midsommar. A refreshing take from within a genre that is known to punish its female characters. 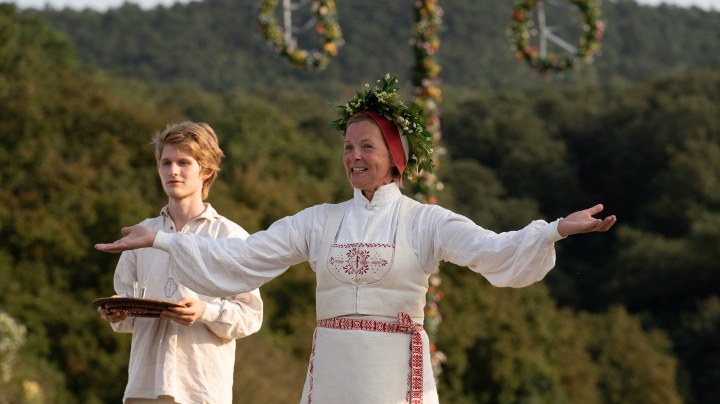 In their pamphlet on female healers and the patriarchy (Witches, Midwives & Nurses), Barbara Ehrenreich and Deidre English discuss the historical role of women as healers and authorities of the people. Women, in particular the “wise woman,” occupied an interesting position of spiritual and physical authority through the uniquely female tradition of healing. It was not until the practice of medicine was seized by the logic and institution driven world of men that women were dethroned from this position of authority and connection their communities.

Why do I bring up the history of women and medicine in a piece about Midsommar? Because in the history of women, both truthful and sensationalised, women and the ability to connect and heal with nature and their communities have all been interwoven. This history is an undercurrent of the understood emotional intelligence of womanhood. And it’s vitally important to understanding the commune at the heart of the film: the Hårga.

In Midsommar, the Hårga women are returned to that position of authority. In the most obvious sense, a woman serves as the spiritual (perhaps even political and religious) leader of the community. A literal “wise woman” guides everything from the integration of newcomers to the religious and cultural ceremonies, and even the selection of mating couples. It’s not only interesting to see a woman helming such a violent community, but to notice that she rules from a place of nurturing. The wise woman is depicted as gentle and understanding, despite the horror that she is carrying out. Fitting for a soft hand, a feminine hand, to lead a community that is so defined by shared emotion and empathy.

Beyond leadership in the traditional sense, women in the Hårga occupy a position of agency and even holiness. These women hold all sexual power; they choose their mates, they use ancient magic to sway outcomes, they’re leaders in the community, and, most glaringly, they share in a sexual ritual that is imbued with female power and highlights sexual pleasure. From within the Hårga, women are given final say over the use of their sexuality and, by further extension, entrusted with the survival of the cult in a ritualised celebration of sex and pregnancy. When you compare the pregnancy ritual in Midsommar to something like what we see in Rosemary’s Baby, for example, the celebration aspect and that feminine control is revolutionary. And, while frightening, it is truly empowering. 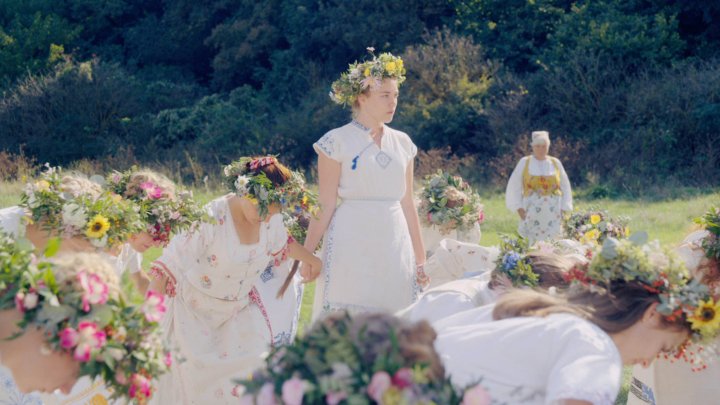 All this being said, the most fascinating exploration of femininity in Midsommar goes beyond specific characters and rituals portrayed in the film. There is lore here that reveres femininity as holy. The mythology of Midsommar is inherently female and based off a very uncensored and ancient notion of womanhood. Women and nature share a bond that is in part based on historical and cultural truths while also partially entrenched in falsehood and fiction. If you’re knowledgeable on Pagan beliefs, you understand the Goddess to be at the centre of nature. Nature is something that pulses with female energy. This is a consistent theme that is present in Midsommar.

At several intervals in the film, Dani (Florence Pugh) sees in her hallucinations that the grass is growing up through her. Or that the trees have a face. Or that the landscape around her is pulsing with breath and reaching for her. This symbolises the primitive connection of woman and Earth; which proves to be of great importance to the cult.

In their crowning of the May Queen, the cult acknowledges this trifecta of woman as bringer of life (literally through her womb), connection to the Earth (via Dani’s May Queen duties of blessing the crops), and an exalted position as a spiritual and community authority. This reverence of the woman’s bodied connection to the Earth is affirmed by the prevalence of bloodletting and women’s blood in rituals and stories in the cult. Menstruation has a magic and a power in Midsommar that goes hand in hand with these other elements. 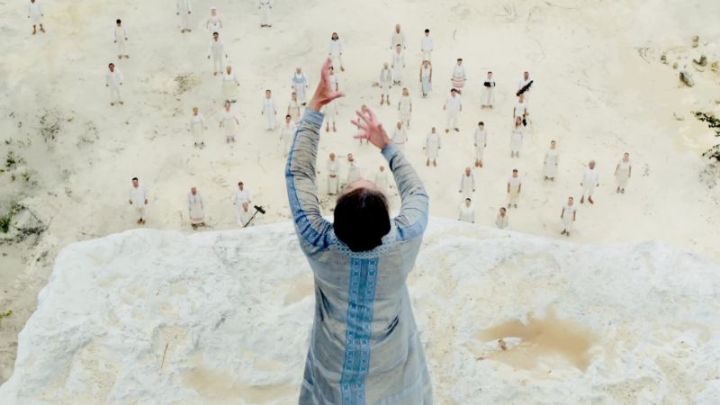 As mentioned at the outset, a major theme of Midsommar is empathy. We are to understand this rural Swedish cult as very in tune with their community and aware of the role they play, in a more universal scope that is highlighted by seasons of the Earth and of life. Beyond an understanding of one’s place is the ability to empathise with every other member of the community. It’s the thread that binds the entire film.

This is best displayed through the elder death ritual, as well as in the pregnancy ritual leading up to the climax. In both instances, young and old are gathered to guide their community members through an important rite of passage that honours death and renewal respectively. As stark contrasts linked by this notion of empathy, the pain and suffering of one is experienced by the whole, as is immense pleasure. Screams of pain and shrieks of orgasm are not the highly individual experiences that one would expect but are ritualised and shared by the entire community. It provides the sense that pain/pleasure/emotion/etc. are widely understood and burdens that are carried in a beautifully twisted gesture of communal sharing.

Women, by our socialised standards and in the world of Midsommar, share emotionally. If empathy is the language of Midsommar, the female characters are doing the most speaking. More importantly, the ability to connect and be emotionally raw is sometimes what separates the survivors from those who are not so lucky. This is highlighted especially well in two very important scenes.

First, the pregnancy ritual. In this scene, as mentioned previously, female pleasure is not only required but is shared. Women, young and old, are bonded by the shared experiences of desire, and the transition from girl to woman, and the rite of motherhood. They cry out together, making this sexual experience less about what is shared between man and woman in favour of a shared experience that uniquely marks womanhood.

Secondly, when Dani discovers that her lover has been unfaithful she screams. Heart wrenching, guttural screams. It is one of the most powerful moments in the film, from a character that has literally swallowed her anguish for the duration of the film up to this point. We notice, as the viewer, that Dani often tries to mask her trauma. Pretending things don’t bother her and squelching her horror with a moan and a hand clapped over her mouth.

But finally, she can scream; she wails with this newfound family that wails alongside her. The women of the cult cry out as if her anguish is their own. It’s damn powerful and it is the moment that Dani accepts her new role in this community. In a way, the entire May Queen ritual is a perfect allegory for Dani’s ability to find peace through this shared female empathy. At one point, Dani’s floral May Queen gown is so large that it almost seems to swallow her and she stumbles under the weight. But she stands tall and she carries it: she carries her place among these women, constructed of flowers symbolising the opportunity for renewal.

Just as Midsommar celebrates the empathy and communication shared by women, it punishes a more masculine idea of lacking empathy. Christian (Jack Reynor), the boyfriend that becomes the cheater, and who is incapable of empathy for Dani and her loss, becomes the sacrificed beast. Mark (Will Poulter) is a more garden-variety “horn dog” character that is a threat to Midsommar’s divine female sexuality and his corpse is later found as a stuffed jester: the fool.

For all these reasons and more, Midsommar is an exhilarating journey into female rage and a celebration of womanhood as something both sensual and monstrous. It’s a portrait of femininity that is rare in both the horror genre and in cinema as a whole. Ari Aster has proven himself an unlikely master.

Caitlin is a sweater enthusiast, film critic, and lean, mean writing machine based in Austin, TX.  Her love of film began with being shown Rosemary’s Baby at a particularly impressionable age and she’s been hooked ever since. She loves a good bourbon and hates people who talk in movies. Caitlin has been writing since 2014 and you can find her work on Film Inquiry, The Financial Diet, Shuffle Online, and many others. Follow her on Twitter at @CaitDoes