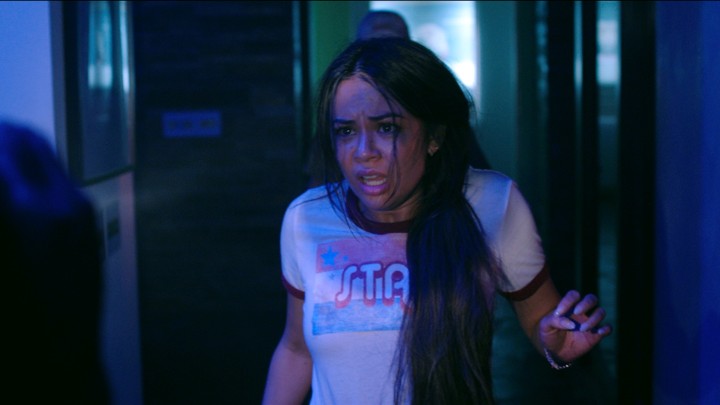 Janel Parrish as Estelle in Trespassers. Courtesy of IFC Midnight.

Home invasion films have enjoyed a particularly successful run over the last few years, most recently with Jordan Peele’s Us and The Strangers sequel Prey at Night. In these examples, the invasion happens by force and complete surprise, by terrifying masked or red boiler suit-wearing individuals with a clear intent to harm. But what happens when the stranger knocks on the door, plain as day, and kindly asks to be let in to make a phone call regarding her broken-down car outside?

Fairuza Balk, most commonly remembered for her role as Nancy in 1996’s The Craft, is this such stranger. Credited as simply ‘The Visitor’ in Orson Oblowitz’s Trespassers, she approaches the beautiful home being rented to two couples on a weekend getaway, exuding a suspicious sense of unease as she is let inside by Sarah (Angela Trimbur) to use the phone. Balk is particularly brilliant and deceptive in her performance, teetering the line of meek and overly friendly to a concerning degree.

The rest of the houseguests are less than pleased about Sarah opening the door to a stranger, particularly her best friend Estelle’s (Janel Parrish) boyfriend Victor (Jonathan Howard), who is exactly the kind of alpha cokehead people seek to avoid at college parties. Sarah’s husband Joseph (Zach Avery) is also on hand to try to diffuse Victor’s aggression, but nothing can stop him and the scene quickly escalates into violence.

Oblowitz’s film presents the home invasion on slightly different terms, where the occupants are the initial instigators that put the story into motion. The couples are already tense due to harbouring dirty secrets and the arrival of The Visitor only explodes the issue. This straight-up one-room thriller aspect of four people airing their dirty laundry and quickly losing their minds would be enough, but all of the characters are so particularly unlikeable that it’s kind of a relief when an outside force enters the picture. It is here we are introduced to our traditional masked intruders, bringing in an extra element and a high level of blood and gore. The film sustains its high tension through the introduction of The Visitor, the masked killers and even the couples themselves; in Trespassers, everybody is seen as a potentially deadly threat.

In terms of style, the films rides off the success of neon-drenched, electro-infused horror films of late, but it doesn’t quite serve the story or overall aesthetic in any way. When a police officer visits the house he asks, “What happened to the lights?” to which he is told there was a power outage. There’s been a power outage? So now the whole house is lit up in blue and pink for some reason. The soundtrack is more of a successful device, it dances around an 80s homage but never fully commits, jumping from electro to silence to a Giallo-inspired score from scene to scene.

Trespassers is a tightly-knit home invasion thriller that doesn’t stray too far from the well-trodden path, but plants enough moments to shock and surprise, with a very welcome return to the horror genre from the legendary Fairuza Balk.