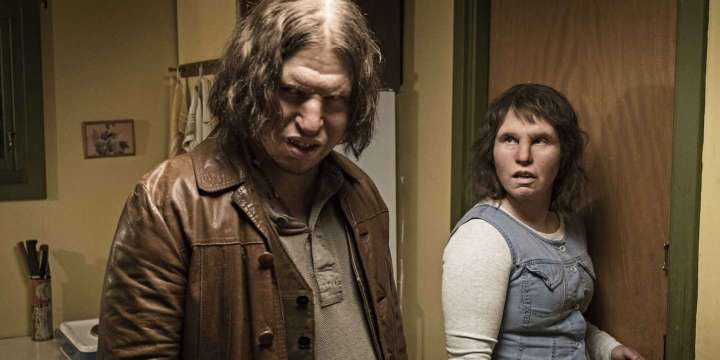 As soon as the screening of Border finished, the first review I overheard was from someone seated in front of me who laughed, once, turned to her friend and said “that was the weirdest thing I’ve ever seen. But I think I really liked it.”

In some ways, that summary encapsulates the experience of watching Border – a truly unique, messy, if harrowing mythological film, equal parts Nordic noir and body horror romance. Director Ali Abbasi pulls no punches in his second effort, following on from 2016’s pregnancy-horror film Shelley, creating a cinema experience that is challenging, at times exhausting, but with so much freshness and originality and beauty that it feels worth it.

The film follows Tina, played by Eva Melander under heavy prosthetics – a border patrol guard for the Swedish customs office, with a nose for corruption. Quite literally, Tina’s efficacy at work is down to her ability to smell out human guilt, shame, deception; a fairly handy superpower to have at the doors of the ‘nothing to declare’ line at the airport. Tina works, returns home to boorish and useless boyfriend Roy, eats unappetising meals and sleeps alone, all on a rinse-repeat cycle until one day, Tina’s scent is confounded by the aggressively confident and unapologetic Vore (an unrecognisable Eero Milonoff).

What follows from this initial meeting is a series of ever-escalating, utterly unexpected and bizarre events as Tina lets go of the humanity she’s so desperately tried to be a part of. Tender scenes with her father in his retirement home, played by veteran Swedish actor Sten Ljunggren, show Tina’s lightness and affection, and more importantly the normalcy of her life; her father asks her about her boyfriend, they talk about her house, what she’s up to – her differences aren’t discussed. Vore, on the other hand, does nothing to hide his otherness; eating maggots, restlessly moving from town to town, and living however he pleases. With the freedom Vore’s arrival affords her, Tina is no longer an incorrect human, but a perfect Other in his eyes.

Border makes no effort to hide the transgressions of humans and non-humans alike; there is no moral superiority in being an outsider or being part of the status quo, made all the clearer as the film progresses. Instead, Abbasi shines a light on the loneliness of existing outside of a society and the queerness of bodies that don’t conform. This theme comes to a head in what some have deemed ‘cinema’s weirdest sex scene’, as what Tina had viewed as bodily imperfections morph into the right body for the right person. The sight of two strange creatures having sex, both too human and not human enough, is at times hysterical, uncomfortable and certainly unusual – but the clear euphoria and sense of belonging visible on Tina’s usually unexpressive face makes it impossible to look away. The animalistic becomes tender through Abbasi’s direction.

Tina’s special abilities inspire the film’s secondary plot, involving the worst of humanity’s crimes and her ability to find the culprits. And as the film progresses, we find more about the origin of Tina’s peculiarities, in ways that weave together the fantastical elements of folklore and the history of human violence.

At its heart, Border is a magical realism story about recognition and identity, that challenges its audience to look past the strange and question where the boundaries of humanity are. In a pivotal scene, Tina tells Vore “I don’t want to hurt anyone. Is it human to think that way?” The answer to that question, as everything else in Border, is not an easy one – but it’s the most important one the film asks, and leaves the audience to come up with their own answer.

Olivia is an anthropology grad and life-long Londoner, who thinks films should be funny or unsettling or both. She’s normally at a cinema or a stand-up comedy gig, and thinks sitting silently at either with friends counts as socialising. Her favourite films are The Fountain, Mulholland Drive, Holy Motors, Drop Dead Gorgeous, Raw and Elle. You can find her over on Twitter talking about all the music that makes her sad, poetry, and other queer stuff @livspills.