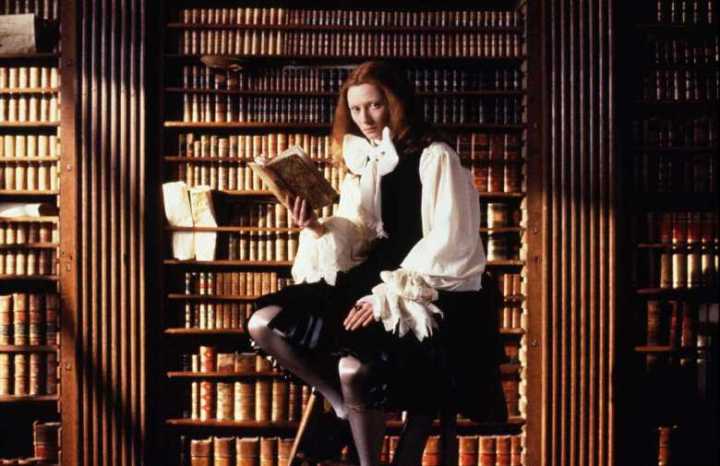 It can be argued that one of the most interesting films that comments on the representation of gender is also one of the most overlooked by modern audiences; Sally Potter’s Orlando (1992). Based upon Virginia Woolf’s 1928 novel Orlando: A Biography, the film tells the story of Orlando (Tilda Swinton), a nobleman in the service of Queen Elizabeth I (Quentin Crisp), who is promised a massive estate and sum of money from the Queen as long as he obeys her one command: “Do not fade. Do not wither. Do not grow old.” As the narrative then progresses, he discovers that he has somehow obtained immortality. However, as he discovers his inability to age, his gender changes from male to female. A film in which a male protagonist metamorphoses into a female is an interesting concept, and the fact that it has been written and directed by Potter can raise an important question; does having a female director at the helm of this film affect the way in which gender and femininity are represented?

For the first half of the film Orlando remains male, and the way in which he is portrayed by Potter during this portion of the film is interesting. Though a somewhat likeable protagonist, he often displays acts of stereotypical male pettiness and entitlement. Whilst betrothed to one woman, his head is turned by Princess Sasha (Charlotte Valandrey), and when his partner discovers that he loves Sasha and proceeds to publicly leave him, he simply breaks the fourth wall and smirks “it would never have worked anyway”, before he continues his pursuit of Sasha. Later, when Sasha questions the grounds of his love for her, he gives her the hollow reasoning of “You are mine […] because I adore you”, an answer that seemingly gives the rather intellectual Sasha a reason to leave him. Orlando then proceeds to brood over his ‘abandonment’ by Sasha for over a century, blaming all women for his downtrodden state, and spends decades writing poetry and literature whilst only spending time in the company of men; be it his equals or his servants. Whilst making a toast with the men in power in Constantinople, Orlando dismisses the ways of women and then goes on to praise the “manly virtues” that he defines as being “loyalty” and “courage”, two things that he doesn’t believe that women can possess. 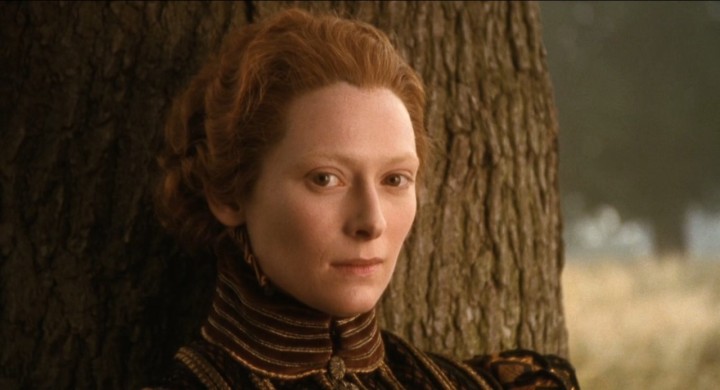 The film itself starts around the year 1600, when Orlando is in the service of Elizabeth I, and throughout its course it cuts to different, significant years in his life. The title cards that state the year and theme of each act make it clear that over a century has passed since the beginning of the film, yet Orlando is not growing old, something that he and his peers must be aware of, but rather comically they never seem to show concern for. After a century or two, the viewer sees that Orlando has had a number of important careers, his final role being the British ambassador to Constantinople. Towards the end of his stay there Orlando is caught in the midst of a riot, after which he falls into a long sleep and unwittingly metamorphoses into a female. Once Orlando awakens she simply looks at her new body in the mirror and calmly states “Same person, no difference at all. Just a different sex”, and returns to her home in England as the new Lady Orlando. However, unlike her inability to age, her peers do take notice of her new sex and the film begins a commentary on the treatment of females from this point. Upon her return home, Orlando, who pursued a failed writing career during her time as a man, is delighted to be invited to a poetry reading. Whilst at the reading, Orlando is mortified at the way in which she is now treated by her contemporaries. She begins to take note of how the men detrimentally speak about women, such as she once did when she was male, when one poet states that he is disgusted that his wife has chosen to learn Greek. He goes on to say that her academic pursuit is ‘unbecoming’, when instead she should remain something that he can look upon as he adorns her in furs and jewels, as if she were his doll. Here, once more, Potter is accentuating how males see themselves as entitled, specifically when it comes to women. Potter also ensures that the only voice of reason at the reading comes from the one other female attendee, who stands up for womankind when Mr Swift states that “every man is, or inspires to be, an idler”, to which she sharply responds “perhaps not every woman.” The reading comes to a sour end when one of the guests refers to Orlando’s stunned silence as ‘perfection’, indicating that the voice of a woman is unwelcome in conversation, and Orlando comes to the realisation that though she sees no difference at all within herself, society does. 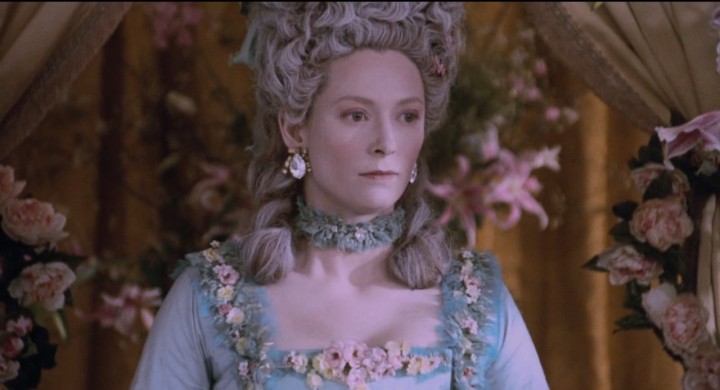 After the failed poetry reading, Orlando returns home to discover that her staff have received word that her entitlement to her property has come under question because she is “legally dead […] and now a female”, which one man argues are the same thing, insinuating that it is better for a man to be dead rather than turn into a female. In a bid to help her secure her land and fortune the Archduke Harry (John Wood) asks for her hand in marriage and claims that he has always been fond of her, whether she was male or female. When Orlando questions his love: “on what grounds?” he replies “I adore you.” Here, Potter has cleverly reversed the way in which Orlando pursued Sasha, with Orlando now being the female, deemed as the possession, simply because she is now a woman. When Orlando, like Sasha, rejects his proposal, he tells her that her actions will result in her becoming a spinster. Harry fails to consider the fact that Orlando’s rejection could leave her homeless and penniless, and he instead decides that the worst thing about her denouncing him and the estate would be that she would receive one of the worst social statuses that can be held by a woman; spinster.

Aside from the representation of females, the physical aspect of femininity is also studied within Orlando. As the film progresses, Orlando begins to embody more and more feminine attributes. Even during his time as a male, Swinton is often dressed in somewhat feminine ensembles and she often wears costumes that have been covered in pearls, a stone that is often associated with femininity, hinting at the transformation that is yet to come. When Orlando returns to England as her new sex, the first thing that she is seen doing is being fitted for an extravagant new wardrobe by a team of dressmakers. She begins to wear elements of pink make up to give her face an element of blush, and swaps her natural red hair for a large, blonde wig. This is as if Orlando, having only known life as a male, and only known femininity from an outside perspective, assumes that to be female she must present herself as feminine and delicate as possible. After the scene in which she is humiliated at the poetry reading, and discovers that she is going to lose everything that Elizabeth I bestowed upon her, Orlando runs through a hedge maze and loses the layers of fabric and jewellery that she had adorned herself with, and emerges at the other side in a very natural looking form; no make up, no wig and a simple dress. The film then heads towards its finale during the present day, and at this point Orlando has embraced an androgynous aesthetic. Having spent 200 years male and 200 years female, it seems as though Orlando has realised that looking a certain way shouldn’t have any impact on her gender, and refuses to let these constructs of the masculine or the feminine bear any hold over her own self image, as she is more focused on being perceived as a good human being, rather than how people perceive her status as a female. 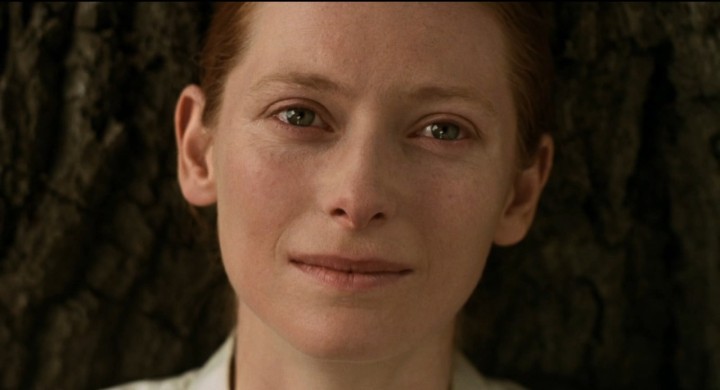 The casting choices in Orlando are also noteworthy in regards to femininity. Swinton in the titular role was a fitting choice due to the sense of androgyny that she has embraced since the beginning of her career, something that allows her to perfectly embody the male and female within Orlando, both in performance and in physicality. The second, and possibly most interesting, casting choice is that of Quentin Crisp as Queen Elizabeth I. Crisp, an actor and writer, was openly homosexual when it was criminalised in the United Kingdom. Potter has clearly used her sense of humour in this casting; instead of casting a beautiful, older woman to play one of the most famous sovereigns in history, she cast an 84 year old famous homosexual man. Crisp was known for his flamboyant style and this is reflected in his character, especially as Potter constantly subverts the concept of the male gaze when shooting him. The camera constantly lingers on Elizabeth, and one scene even displays voyeurism as the viewer gets to see her being undressed, the way in which a female character would typically be objectified. Potter almost mocks the expectations of the audience through this subversion, as instead of getting close up, intimate shots of Swinton, they instead receive candid shots of an elderly man in an ornate dress.

Overall, Orlando is an interesting and unique study of gender in film, as the audience ultimately gets to see a singular character live their life, changing from one gender to another, and see how they are treated as each binary gender. Potter has clearly used this film as a vehicle to stir up the gender politics amongst its audience and look at the way in which female characters are depicted. Despite Orlando remaining the same person and seeing her physical form as trivial, she learns that gender can have a massive impact on the way in which a person is treated and perceived. Though at times Potter can be seen as trivialising the behaviour of male characters in Orlando, she is making a bigger statement about the way in which females are treated. At the end of the film the viewers sees that Orlando has, thanks to her wealth of experience from living both her male and female lives, finally managed to put her heart and soul into a successful manuscript. The final scene ends with a finally content Orlando, sat under a tree crying out of happiness, as she watches an angel fly above singing a song with a particular lyric that embodies Potter’s overall sentiment of gender and the film: “We are joined, we are one, with a human face.” 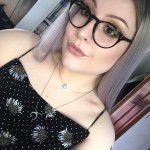 Leigh-Anne Ashton is a Bachelor of the Arts in Film Studies who’s a little bit John Waters, a little bit Werner Herzog, and a little bit rock ’n’ roll. She take pleasure in the little things in life, such as; make up, books, cats, drag queens, her Odeon Limitless Card, and Jake Gyllenhaal. Her favourite films include, but are not limited to; A Clockwork Orange, Blade Runner, Female Trouble, Perfect Blue, Rashomon, and Dazed and Confused. You can find her sarcastic, one sentence film reviews on Letterboxd, or read her grown up writing over on www.mondodivine.co.uk. Twitter: @leighanneashton Instagram: @leighanneashton