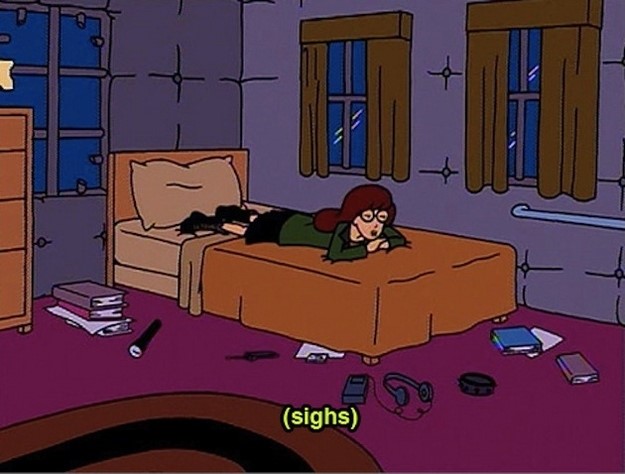 In the same year I was born, where the cartoon environment was led by male characters and writers, voiced by Tracy Grandstaff, Daria Morgendorffer graced the screens of MTV viewers worldwide.

You may know her as “diarrhea. Heh heh, heh”, she’s a character from  Beavis and Butt-head who got her very own spin-off. MTV wanted a female lead in a cartoon in attempt to appeal to female audiences. A year into broadcast (1998), Daria was one of the top shows on MTV with 1 to 2 million viewers, proving once again that shows about girls are not only of interest to girls. Duh. The show was witty, cynical, laid-back and full of references. Daria was a more mature version of Beavis and Butthead, her maturity and lack of patience are actually probably a side effect of having to be in a class with those two. Daria stood out in her school for not being superficial but instead intelligent and honest, and as TV mirrors life, the show stood out among other teen aimed programming of the time for the same reasons Daria didn’t fit in at school.

In the sick sad world of Lawndale amongst useless adults and shallow youth, Daria finds a best friend Jane Lane. Jane is a cynical, sleepy, misfit artist who Daria tries to survive high school alongside, armed only with their sharp, dry, dark wit. They are friends on the basis that they hate the same stuff, like the same pizza toppings, combined with  their similar sarcastic monotone, they are perfect  best friend match. When Daria gets a bit to overwhelmingly doom and gloom Jane is around to make bad (good), she can cheer her up and tell her how stupid she’s being. Although they do fall out, their positive friendship isn’t as toxic as ones presented in other shows aimed at teenagers, they never try to get one ups on each other but instead work with mutual (lack of) effort to insult everyone else. When they do rarely fall out or piss each other off, they eventually have an honest chat about it and call the other out on it: Talk about friendship role models! 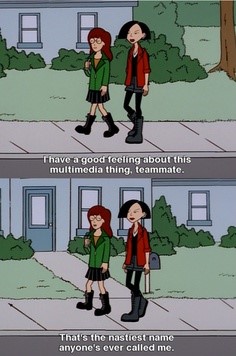 Daria’s lack of enthusiasm isn’t the biggest concern of the show, in the first episode we are reassured, “I don’t have low self-esteem, I just have low esteem for everyone else”.  We view her world from the point of view of 16 year old girl, a viewpoint frequently left out of films about things other than love and TV shows that last more than one season, and as I happen to be a teenage girl myself I’m thankful that a programme exists that’s in line with my outlook. Daria is wonderful and entertaining but one of my favourite episodes, Partners Complaint, is a great show of how relevant Daria still is 17 years on. It deals with friendship drama and racism and break ups – also an episode where the amazing but rarely featured Jodie Landon’s character is given some real screen time. (she’s analysed better than I ever could in this article at Geekquality). 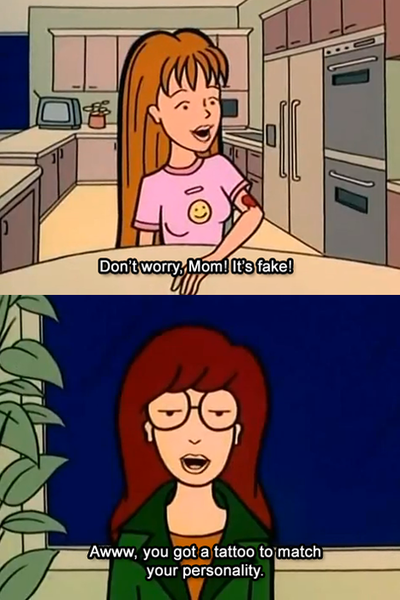 Daria is also self-aware, almost painfully so, and she is a flawed character who often faces inner-conflict with her self-righteousness and moral high ground, crying over her appearance in the school toilets and getting her belly button pierced to impress a cute boy. She reconciles with her problems and grows up, though it usually takes her mum imparting some wisdom and encouraging words. She’s the perfect case study into why ‘flawed’ characters are so important – if she didn’t steal her best friends boyfriend or was unforgivingly mean to her little sister once in a while she would be way to irrelevant and be just another empty representation of the angsty teenage girl, that the real angsty teenage girls would simply roll their eyes at. 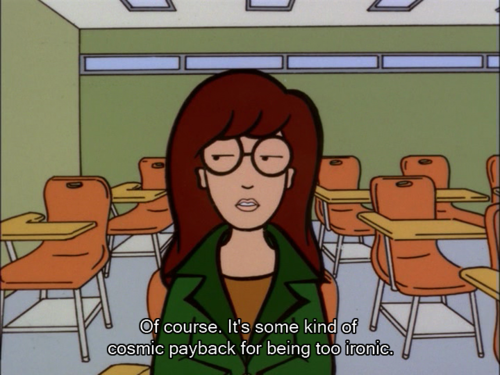 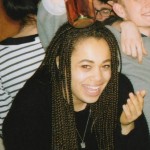 Reba Martin is an 18 year old from Bristol. She’s been obsessed with the Simpsons since before she could walk, and watches it religiously to this day. Her hobbies include planning to go to the cinema, and going to the cinema. A few favourite films are Eraserhead, Ghost World, and Clerks. You look at her movie diary here and she tweets @rebaxmartin