REVIEW- Inside Out: On growing up, feelings and ending the mental health stigma 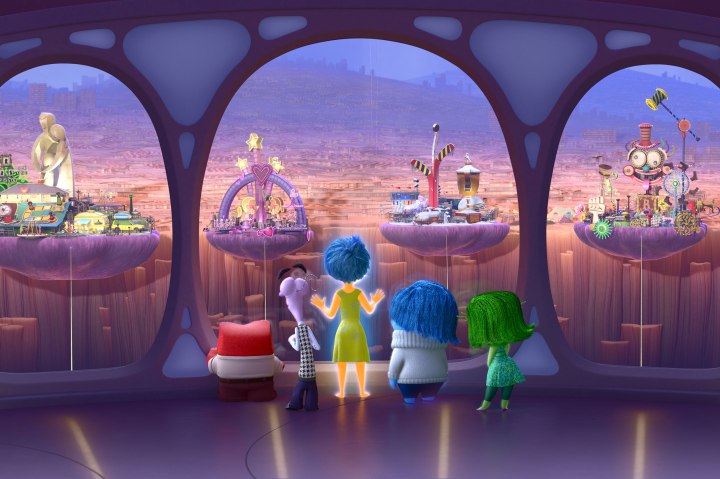 Pixar’s latest creation Inside Out is one of their strongest offerings yet. It’s funny, complex, emotional and incredibly clever. The film is based around a young girl called Riley whose parents decide to move from Minnesota to San Francisco and how the change affects her emotionally. Within her head are personifications of five emotions; Joy, Sadness, Disgust, Fear and Anger – who live in a HQ within her head. Throughout the film they are tested multiple times to keep Riley happy even though she doesn’t like anything about her new home. The emotions troubles are two-fold as a series of events leads to Sadness and Joy being sent to the infinite area of memory storage with no feasible way to get back to HQ -where they (in particular Joy) are needed desperately.

Inside Out takes us on a journey through the twists and turns of growing up but also on one on the difficulties of accepting and adapting to change – especially when everything seems wrong and worse than it was before. These themes are relatable to everyone, making the film suitable for all ages. The humour seen contains plenty of jokes that are tailored for the older members of the audience, so there’s definitely something for everyone. In terms of the animation, Inside Out is like with every Pixar movie, flawless. The attention to detail in each of the characters and the depth of the world the film is set in are brilliant and are proof that Pixar remain at the top of their game.

The subtle nature of the plot when presenting the ins and outs of human interaction and emotion means that you don’t come away feeling too overwhelmed or weighed down by heavy content, which would make it lose its appeal to kids. To me this is important as the creators managed to weave important ideas about the human psyche, i.e. how sometimes feeling sad isn’t such a bad thing and can often be the start of something special or joyful, into the film without coming across too preachy. Inside Out carries the message that it’s ok to sometimes not understand why you feel a certain emotion or why you don’t feel happy when everyone else is telling you that you should be. It reinforces the notion that although what goes on within our heads is often unpredictable and challenging, it shouldn’t be seen as wrong as there is no correct or incorrect way to deal with issues such as change, because everyone deals with them differently – so you shouldn’t ever try to force yourself to feel a certain way when it’s obvious that you don’t, as that tends to cause more harm than good. This idea is shown through Joy’s refusal to let Sadness change memories or have any form of input into how Riley is feeling, as Joy believes that Riley has to be happy 100% of the time other wise her life will be ruined – when actually later on in the film it becomes clear that Riley is at her healthiest when no single emotion is overwhelming her 24/7.

Overall, on a basic level Inside Out ticks all the boxes in terms of being an entertaining kids film and for being a successful Pixar creation. However at the same time it’s a vital piece of work in terms of opening up the discussion on mental health and succeeds where perhaps others have failed; as it doesn’t make the topic of mental health seem scary and alienating, instead it allows people to learn and hopefully explore the subject more – which is exactly what is needed to end the stigma around mental health issues.

Megan Gibb is a 19 year old from Cambridge, based in Manchester for university and has been in love with all things film ever since she can remember. Her fave films are The Terminator, Drive, Forrest Gump and Fight Club but she also has a huge soft spot for 1980’s John Hughes films. Her main interests include shopping for vinyl, eating too much carrot cake and making wall collages of 80’s bands for her and her friends. She can be found on twitter @megang96 and blogs at popdunk.

Tagged as: cinema, film review, inside out, megan gibb, Review

TIFF ’21 – ‘Ste. Anne’ Is A Cautionary Tale About The Importance Of Storytelling

TIFF ’21 – ‘Mothering Sunday’ Portrays the Power of Love and Loss

‘Boris Karloff: The Man Behind the Monster’ Explores A Beloved Legacy