From the grotesque and the funny  to the downright cringe inducing Halloween would be nothing without cult movies and wonderful B-grade trash. Cited as ‘obscure or unpopular with mainstream audiences, and often revolutionary or ironically enjoyed’ by Wikipedia, we love to take comfort in tacky sfx, wacky characters and quote the iconic lines of our favourite characters. So here we have 6 ScreenQueens’ faves for the spookiest season…. 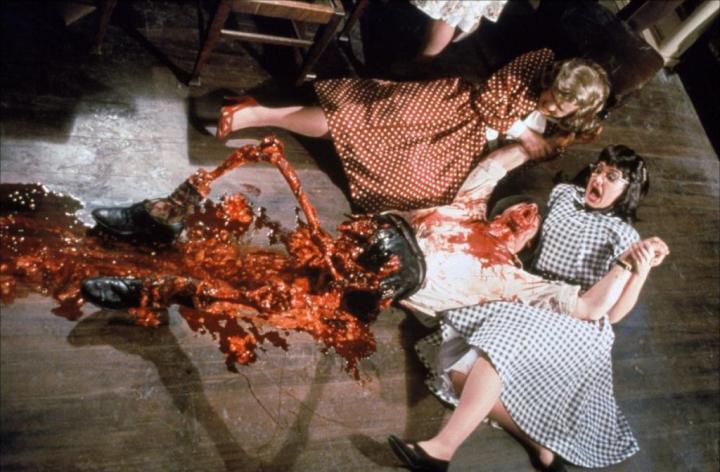 Watching Dead Alive aka Braindead you’d find it hard to believe that the Oscar-winning Lord of the Rings director Peter Jackson made this. But it’s true! Before Orcs and Hobbits Peter Jackson was a lover of all things zombies and horror. After Peter Jackson’s success with The Lord of the Rings trilogy, many turned to look at his past work and thus Braindead received a cult following years after it’s release. Set in the cheery 1950s in New Zealand, we follow Lionel, a Mama’s boy who has to care for his overbearing mother. Everything changes when Lionel falls head-over-heels in love with a girl. While trying to stop them, his mother gets bitten by a Sumatran rat monkey and becomes a zombie. Eventually the mother starts infecting everyone in the town and Lionel must stop them! Braindead is actually considered to be one of the goriest films of all time. It takes what Ash did in Evil Dead and multiplies it by 1,000. Only instead of a chainsaw Lionel wields a lawnmower.  Braindead is a rare film that gives you side-splitting laughs while also being so gut-wrenchingly nauseating that it’s hard to watch. It’s sugar-sweet 1950s setting juxtaposed with the absolutely disgusting visuals makes for one unique and awesome movie that you need to see! If you can stomach it… –Caroline Madden

Scream is not quite the conventional horror movie. In fact, it is an intelligent deconstruction of generic slasher clichés and it is perhaps the first of its kind. Unfortunately, the film has fallen prey to the clutches of popular culture. The blood-curdling mask that is the choice of the murderous Ghostface has become little more than a token outfit for Halloween, causing some to question its place as a ‘cult’ movie. Regardless, I find that Scream is still one of the greatest horrors of recent times, largely due to the fact that it defies common terror tropes and instead pulls these apart, piece by piece, thereby making it a wonderfully biting piece of satire. The protagonist herself, Sydney Prescott, is a brilliant reversal of the typical female featured in horror. Rather than falling into the usual traps; such as simply being a virgin and making the mistake of wandering around in isolated areas, Sydney manages to avoid this, which prevents her from becoming a stereotype and presents her as much more of a developed character, making it possible for us to empathise with her and so setting up a concept that is often rarely explored in mainstream horror movies; the presence of an enjoyable character. Another of the reasons as to why Scream is so refreshingly innovative is due to its self-awareness, it knows that it could easily fall short and end up as a feeble attempt at something new but it works with this, by skilfully managing to escape the possibility that it could try too hard to be intelligent. Instead, the satire that underlies throughout the film is subtle and all the more effective for it. As a final result, Scream serves as a near perfect example of how to successfully and single-handedly revive the horror genre.-Hannah Ryan

You know those Hot Wheel adverts, where you’d see the baddest car spinning and twirling through fire rings and for those 60 odd seconds nothing making any sense at all? A weird combination, I guess, but that’s what Tetsuo: The Iron Man feels like. Except it isn’t 60 seconds long, it’s 60 minutes. And it’s FUCKING AWESOME.
Honestly though, for something so damn cool, there isn’t too much to say about it. Those are the only thoughts you’ll have after watching this film. (I’ll bet money on this right now, internet.) Oh that and I guess the usual, “what the hell did I just watch?” shtick. Don’t overthink Tetsuo: The Iron Man. If anything, you don’t really need to think at all when you’re watching it. It is what it is – a cyberpunk mash-up of utter madness where nothing needs to make sense. You just go along for the ride and take it as it is.
The easiest comparison to make (outside of Hot Wheel adverts) is to Franz Kafka’s novella, The Metamorphosis.  Like  the classic story, it is about a man who transforms into something that isn’t really human. In The Metamorphosis it’s an insect, here it’s scrap metal. Totally similar. But, I mean, a dude changes into scrap metal and, for the best part of the film, just runs around Japan failing his arms around. That is a film that exists and my god is it amazing.
In whatever way you can, you need to source this film out. Drop everything you’re doing and go watch this film right now. And if you don’t dig it? Well, consider our would-be friendship terminated. –Cherokee Seebalack
THE WIZARD OF GORE (1970) 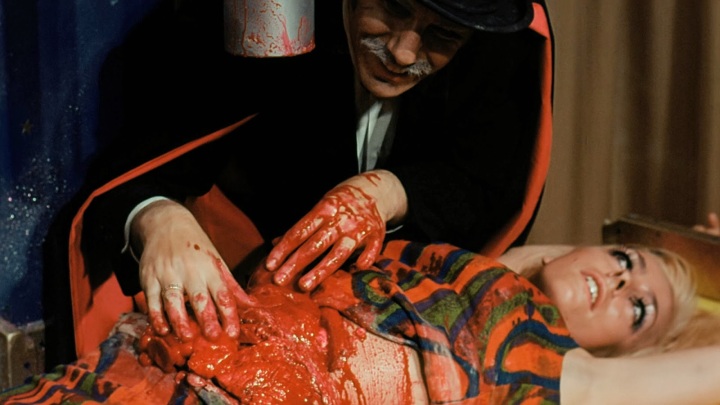 “The Wizard of Gore” is one of many splatter films made by the one and only ‘Godfather Of Gore’ Herschell Gordon Lewis. It’s grainy, it’s bloody, it’s outrageously campy and also did I mention it’s drenched in fake blood? People are chain sawed in half, have their throats stuffed with swords and have their intestines ripped out — but somehow still survive. Due to Montag The Magnificent’s impeccable power to control the minds of those he mutilates. The plot of this film is rather arbitrary but it’s gut wrenching, bile inducing gore sequences are much worth the watch. The first time I heard about this film was through Juno, and I actually thought it was fake. I managed to find the full thing on YouTube and was blown away by it’s camp and gore. This movie looks like something straight out of the Quentin Tarantino universe (if that’s even possible!) and it’s gross. I read somewhere that throughout the filming of this movie they used a lamb carcass to make it look like human flesh and bones. One lamb carcass. As well as a TON of fake blood. I don’t know which is more unsettling, the fact that they used a lamb carcass as a prop or the smell that thing gave out. Gross. Unfortunately I couldn’t find the entire movie on YouTube (although they are a lot of funny lil snippets from the film, which is almost just as good), there is even a 2007 remake of the movie which I’ve never seen but looks promising. –Monica Pallotta

When I first came across re-animator, I thought: it was eighties splatter comedy, I had seen the evil dead, liked it, but thought there wasn’t enough charm to it. I managed to catch re-animator on a late night screening on film 4 (god bless Frightfest) and instantly loved it.
The story: Herbert West is a cracked, pint-sized, mad scientist sort of character (just as vain as sherlock holmes) who has one dedicated passion in life: bringing the dead back to life. He is so passionate about this dream that he has perfected a re-animating serum, a neon-green substance when injected into the back of any corpses head, brings them back to live! although the quality of their humane instincts is deteriorated based on how long they had been dead.
Herbert is kicked out of his place of study in Switzerland for reviving his instructor Dr Hans Gruber and is accepted into Miskatonic university in Massachusetts. Here he meets Dan Cain, a determined trainee doctor, who never gives up on his patients and the evil Dr Carl Hill who is a plagiarist of Gruber’s work and clashes with West for his theory on brain-death. Hill also has a beyond creepy obsession with Dan’s girlfriend, Meg, who is scared by West moving in with Dan and wary of the two becoming friends. Despite Megs efforts of keeping him and Herbert apart, the two become a mad pair set on becoming famous by repeatedly giving the gift of life to the dead!
The film would not be complete without Jeffrey Combs strangely intriguing role of Herbert West and just the right amount of creative gore to satisfy any horror buff. Re-animator is a deliriously fun and clever little movie that gave us one of the most iconic and weirdly attractive horror icons of all time!

The best thing about this movie is the spelling of clowns. Klowns. Killer Klowns from Outer Space. It’s honestly got B-Movie written all over, brilliant. I watched this movie with a friend when we were on holiday, after traipsing through the depths of Netflix, and I am SO glad we did. It’s one of those ‘so bad it’s good’ films, like most B-movies are. It’s a sci-fi spoof; it doesn’t take itself seriously, it’s so trashy, just gather all your mates round with some beers and all the sugar they can carry and watch the hell out of this. I would describe the plot but it’s literally in the title. That’s it, that’s the movie, Killer Klowns from Outer Space. They land in a circus tent and trap people in candyfloss. Classic case of  ‘call the police and tell them klowns keep kidnapping people and chasing them with deadly cream pies’ and the police man tells them they need a psychiatrist not the police. The klowns have guns that shoot popcorn at people, then the popcorn eats who it has hit, and they drink blood through twisty straws. If that doesn’t sound like genius to you, I don’t know what would. The movie takes the typical fear of clowns and rolls with it, making them gruesome and Killer, not like ‘It’ where Tim Curry’s portrayal of Pennywise is genuinely frightening. These Killer Klowns are comedic and goofy looking which works really well as a midnight cult movie – not to be taken seriously by anyone, just pure entertainment.-Mel Sutherland

‘Clover’ Doesn’t Quite Hit the Mark as a Black Comedy, but It Has Its Moments