‘Supersize Me 2: Holy Chicken!’ is Another Eye Opening Documentary About the US and it’s Obsession With Fast Food

When Supersize Me arrived in the UK, it was a shock but also received with some underlying smugness. We may have almost as many fast food chains as the states but this was proof that something in North America had gone seriously, seriously wrong when it came to health. Morgan Spurlock is notable for many things, as a playwright, a director, a producer, or television personality. Yet what he is most famous for, and forever will be, as the man who ate McDonalds every day for a month and made an Academy Award nominated documentary about the process. And in 2019, he’s back with a new documentary that seeks to uncover the secrets of the American Chicken Industry and reveal all through his own fast-food chain ‘Holy Chicken’.

As with the original, Spurlock is our guide into the new ‘greenwashed’ fast food industry. Looking at any high street it’s not hard to see that the face of fast food has been revamped. Everywhere has at least one salad option, grilled chicken rather than deep fried, and veggie fries rather than potatoes. But according to Spurlock, it’s often not so different from traditional fast food, just with a different image. After talking with moguls of various fast-food empires, Spurlock decides that his weapon of choice will be the chicken sandwich. As he takes an odyssey through everything from chicken farming, to branding, to market research, Spurlock aims to discover just how much bullshit he can get away with and still convince his customers that his product is part of the new brand of ‘healthy, organic, well-treated’ fast food.

For those unfamiliar with Spurlock’s work, he favours a documentary style in which he ‘hosts’ the film, acting as both subject and narrator. For better or for worse, we are on Spurlock’s side and see through his lens. It is common knowledge that the American food industry treats chickens horrifically, with birds packed in so tight they can’t move, raised solely to end up on our plates. Yet it is another thing to see these innocent chickens who grow so fast that their feathers can’t keep up and they have a heart attack. Spurlock calls them his ‘Schwarzenegger’ chickens and holds one up, with it’s skin and ribcage in view to hit home the brutal reality of the lives of these animals – but who cares, they’re just for eating right?

Worse still is the sections which he spends talking to marketing executives, food technicians, and experts about the art of food labelling. The buzz words that supermarkets shove down our throats to make food seem healthier, fresher, like they lived a better life. These conversations demonstrate that they are all meaningless, un-enforceable standards that are designed to trick us psychologically. Every scene of this film is designed to open our eyes and skewer the deep levels of bullshit that the American fast-food industry contains. The food standards in the US may be worse than in the UK but that does not make us exempt from the fallacies peddled by the global food industry.

The majority of the doc is very tongue in cheek, and never more so when Spurlock decides to make his chickens ‘free-range’. He opens up his chicken coop, places a small fence around the entrance, and gives the chickens a small area in which to run around. Nevermind, the chickens don’t even want to leave the hen house as the temperature is over 100 degrees Fahrenheit. It doesn’t matter, according to the FDA regulations his chickens are free-range. However there is a darker thread running through Spurlock’s fried chicken odyssey. The corporate monster of Big Chicken, clearly titled to appear as a relative of the evil Big Pharma, who seeks to control and subjugate its farmers for maximum profit. Once they catch on that the Supersize Me guy is branching out into chicken farming, Spurlock is blocked from every angel. The one farmer who decides to help him —Jonathan Buttram, President of the Alabama Poultry Growers Association—pays dearly for his trouble. Their partnership mirrors that of Bryan Fogel and Grigory Rodchenkov in Icarus, even if in a less dangerous, less political sphere. Buttram helps Spurlock because he wants to expose the practices of the regulatory board and how they are destroying the livelihoods of chicken farmers across the US who don’t adhere to their every whim. This is the emotional heart of the documentary and the abuse Jonathan experiences at the hands of people that should be helping him. It reminds us that it is not just chickens who get screwed over in the food industry.

All of this culminates in the grand opening of Spurlock’s restaurant ‘Holy Chicken’, the home of the crispy grilled (never fried) chicken sandwich. Where they openly tell every customer every piece of information one has heard throughout the film. They are an ‘honest’ chicken shop, hoping to educate, change consumer opinion, and give you one tasty sandwich. But one can’t help feeling that Spurlock, of all people, is being a tad optimistic. The tone of the film suggests that eventually the giant food behemoth that destroys the very consumers it needs to survive, will be defeated. Or at least forced to adjust its practices to be more humane and actually promote a healthier lifestyle. We have seen a shift toward healthier lifestyles due to documentaries such as Cowspiracy that shine a light on the malpractice of the American Meat Industry. People, in general, care more about where their food comes from, and how it affects their health. But at the end of the day our stomachs and wallets will always come before these issues. Especially in the US. Even with Holy Chicken’s transparency, consumers till ate their food even if they began to feel uncomfortable.

Supersize Me 2 is an odd cousin of the first film and definitely builds on Morgan Spurlock’s lone hero against the establishment myth in a humorous and engaging way. His DIY journey into chicken farming and entrepreneurship highlights some key points about how the transformation of fast food appears to be more in image than anything else. All wrapped up in an easy to swallow, entertaining documentary.

However, to some this is nothing new. The information is out there, it doesn’t take a lot to start thinking about the food we are sold on the high street in relation to our health. But if Spurlock’s Holy Chicken is what we need for consumers to finally wake up and make healthier choices, than by all means, let’s make it go global.

Supersize Me 2: Holy Chicken! is out on Digital on December 9th 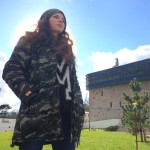 Mia Garfield has just finished a degree in Film at Falmouth University. She has just finished her first short ‘Sonder’, keep an eye out for it at festivals in the UK. A big lover of Fantasy, Sci-Fi, and Mythology, her taste is varied. Her favourite films include Howl’s Moving Castle, Memoirs of A Geisha, How to Train Your Dragon, and Big Hero 6. You can find her @miajulianna2864