A film about a widowed 80-year-old Chinese woman who finds herself entangled with rival gangs in New York’s Chinatown was not the film I expected to resonate with the most at this year’s BFI London Film Festival, but I truly have not stopped thinking about it since my first viewing. I’m not quite sure whether it’s because Grandma Wong reminds me of the resilient, sharp-witted, and caring women in my own life or if it’s because I am hoping (maybe even anticipating) to become like Grandma Wong when I’m older, either way, Sasie Sealy’s Lucky Grandma is an instant favourite from this year’s LFF.

The dark comedy stars Tsai Chin (The Joy Luck Club) as Grandma Wong, the chain-smoking widow who tries her luck at the casino following a local fortune teller’s advice. Her luck eventually runs out and she is left targeted by a local gang. To protect herself, she hires a bodyguard from a rival gang in the form of Big Pong (Corey Ha). The film explores ageing and the immigrant experience in unprecedented ways all while feeling like the classic comedy-action films you watched growing up.

I had the absolute pleasure of speaking to the director Sasie Sealy, veteran actress Tsai Chin and one of the film’s producers, Cara Marcous during the film’s run at LFF.

SQ: This film is such a beautiful love letter to New York, from the Chinatown buses to using a song from New York’s own Awkwafina, how has it been sharing Lucky Grandma to a London audience?

CM: It’s different when you watch it with more Asian people in the audience because there are some jokes the London audience don’t get, but there was a laugher so it didn’t feel that different.

SS: I feel like the Brits kinda like it, they like gangster movies. They like dark, dry kind of humour — we’ve had a lovely reception here. I don’t know if I’ve noticed any specific differences. Although, I don’t know how many people recognised Awkwafina — I’m really happy you caught it!

I have heard about the Chinatown buses before, but the film just takes it on such a journey. Where did the premise come from?

SS: I was on one of those Chinatown buses and I had an image of the bag scene, that was the starting point of the inspiration. I really wanted to write a story where one small decision snowballs. It was pretty clear to me from that scene what it would be, a lot of the things that changed were the subtle things, the basic premise was always there — the character work, family work, that kind of changed over time.

CM: You knew that you wanted her [Grandma Wong] at the casino and you had the image of her coming in.

SS: Yeah, those casinos are so crazy and bizarre. They really cater to their Asian, mostly Chinese, audience. They have their own food court and they advertise in Chinatown!

When I was watching the film, I’m not sure if it’s intentional, but the opening really reminded me of Cleo from 5 to 7, was that an homage to Agnès Varda? And what/who were your other influences in making the film?

SS: Yes! You got all of our references! I think you’re the only one who recognised both our Awkwafina and Agnès Varda reference. Besides Agnès, we were obviously inspired by the Coen Brothers. Bong Joon-ho is one of my biggest influences and I grew up watching Hong Kong gangster movies. We were also really inspired by the writing in the film The Maid (2010) which has the same dark humour. And obviously Big Pong was our Andre the Giant like in Princess Bride.

Lucky Grandma won the grant from Tribeca Film Festival/Tribeca Film Institute and AT&T [a million-dollar grant which aims to help filmmakers from underrepresented communities the chance to produce their own films], how long were you into production or writing when that happened?

SS: That exact grant financed the movie. We had tried to raise finance for the movie for a few years, but you know, nobody wanted to make a movie about an old Chinese lady that was mostly in Chinese so it was a really hard sell. People loved the script but they wouldn’t know what to do with it. It was pre-Crazy Rich Asians, maybe now it would be different? But I still don’t know, it’s still featuring an older woman. I got contacted by Tribeca, as I had worked with them before and they told me about this programme they were doing with AT&T called ‘Untold Stories’, so we submitted the script and there were many rounds….Then there were five finalists, it was basically like Shark Tank, but we ended up winning! That was what really greenlit the movie and made it possible.

Did you already have Tsai Chin connected to the project when you won?

SS: No. We had to make and deliver the movie within the year because we had to premiere at Tribeca the following year. So we went looking for Grandma, we were looking for months before we found her.

Tsai, what made you then take on the role?

TC: Because they paid me millions!

CM: She’s a comedian this one!

TC: Well, she’s in every scene, what else do you need?! Sorry, I’m very flippant, you have to be when you’re older, life is getting very short to be serious.

You really are the perfect Grandma Wong.

(We then started talking about how Tsai Chin was the first Chinese student at the Royal Academy of Dramatic Art. She shared some wisdom on the importance of living the London student hustle and how those struggles will shape you as a person.)

That is basically my life right now!

The looks shared between Grandma and Sister Fong at the end of the film is really interesting, do you think the characters would have become partners in crime beyond the film’s ending?

SS: I don’t know if they would have been partners in crime, but I definitely think there’s a level of respect — there’s a recognition between them. We wanted Sister Fong to also be a woman, we wanted her to be older, but not as old as Grandma, we wanted them to be similar in a way.

In terms of the action sequences, how long was the preparation for that?

CM: Well, we really started August first and we were shooting by mid-October, so we were preparing for it throughout that time — two and a half months. And we had help, we had special effect advisors come and stunt coordinators.

SS: It was obviously one of the biggest challenges, especially on such a low budget.

CM: It really was one of the moments where we really felt the budget.

There seems to be a wave of Asian-American stories on screen at the moment, how does it feel to be part of that? It seems like such a full-circle moment having Tsai Chin star in your film as she was a part of the last Asian-American led cast nearly 20 years ago [Joy Luck Club] until Crazy Rich Asians. Where do you think the ‘wave’ is headed towards?

SS: I guess it feels great…We haven’t met a lot of the other filmmakers yet. We were on a parallel [film festival] circuit with a lot of them, but hopefully, we get to meet them!

CM: It seems like stuff is happening, The Farewell is doing exceptionally well. Crazy Rich Asians is something very different, obviously, but it had outrageous success, and then here we are sort of coming in at the same time. I think there are [now] also a lot of great parts for older women.

TC: Yes. I hope it lasts, but these things can be like fads that suddenly disappear again, you know?

SS: Hopefully it lasts and it flourishes and then you don’t have to be the only Asian movie.

As I passed all the tests (Which I presume was recognising both the Varda and Awkwafina reference), Tsai offered me two cookies and as I left she gave me the parting message of “Good luck! In 20 years I expect you to be a CEO of some kind, okay?”. I can’t promise I’ll be a CEO but this, alongside the film’s refreshing and entertaining exploration into the female and immigrant experience, has undoubtedly inspired me for years to come. 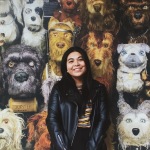 Graciela Mae is a Filipina studying Film, Television and Digital Production at Royal Holloway, University of London. When she’s not watching films, she’s probably attempting to make films herself. She swears she has other hobbies. Her favourite movies include Rushmore, Cléo from 5 to 7, 20th Century Women, and Carol. You can find her on twitter: @notgracielamae

Drowning in the Male Gaze: Women’s Bodies ‘Under the Silver Lake’

In ‘Call Me By Your Name’, Desire is the Loneliest Thing