#DBW The Power of Chosen Family in ‘Can You Ever Forgive Me?’

“Can you keep a secret?” Lee asks Jack. He responds, “Who would I tell? All my friends are dead.”

In 1991, the LGBTQ community in New York City was largely in a state of depression. The AIDS epidemic of the previous decade left many ill or deceased. Those who survived were understandably distraught. The people they leaned on, organised with and built relationships with were suddenly gone. Many leaned on what remained of their chosen family. Chosen family served as support for the survivors of the AIDS crisis who didn’t receive the same acceptance from their biological families due to their sexuality.

Marielle Heller’s film Can You Ever Forgive Me? based on Lee Israel’s memoir, illustrates the power of chosen family while sharing the unusual story of her life of forgery. The film follows Lee Israel (Melissa McCarthy), a failing writer struggling with depression and alcoholism. For her, a typical day looks pretty dismal. One day, while drinking at her day job, Lee snaps at a coworker. A supervisor sees and promptly fires her. That evening, Lee spends her night at home, talking to her cat while watching a movie before dusting dead flies off her pillowcase before laying down to sleep.

In a desperate attempt to turn her life around, Lee takes up forgery as a source of income. Her old friend Jack Hock (Richard E. Grant) becomes her accomplice, assisting in the selling of forged letters and taking a cut of the profit. The two of them form a strong, familial-like bond, complete with banter and serious arguments, but built on a foundation of deep understanding of one another. Both characters are part of the LGBT community, Lee being a lesbian and Jack a gay man. They only have each other, so they depend on each other like family.

Jack and Lee are extremely different people, but their shared need for cash and affinity for a glass of whiskey solidifies their friendship. Jack is impulsive, lively and a bit goofy at times. He has a taste for nightlife and adventure. Lee, on the other hand, is stubborn, somewhat reserved and disgruntled at the state of her life. She declares herself to be a “51-year-old who likes cats better than people.” Jack quickly becomes the person Lee spends the most time with. The two of them meet up for meals, drinks and to run their forgery operation out of Lee’s apartment. Eventually, Jack starts crashing at Lee’s apartment.

Together, Lee and Jack make a wildly entertaining odd couple. Watching them interact is truly a delight. Their contrasting personalities clash at times, but the sweet moments outweigh the sour. For example, when Jack sees the state of Lee’s apartment, he helps to sort through mounds of paper, clean scattered cat faeces and get the place back in order. This gesture of compassion shows the pure love at the core of their relationship.

In real life, Lee Israel and Jack Hock’s friendship doesn’t have a tidy ending. But, in the film, they have a satisfying resolution years after court proceedings related to the forgeries. While on house arrest, Lee meets Jack at their favorite bar when she’s supposed to be at an AA meeting. Jack has lost his hair and walks with a cane, implying that he is fighting AIDS. She explains to Jack that she is in the process of writing a memoir and asks for permission to write about him. Jack agrees on the condition that she writes him as, “29, with great skin.” With tears in her eyes, Lee laughs and says she will. On his way out, Jack says, “You’re a horrid cunt, Lee,” with a little laugh. “You too Jack,” Lee responds as he leaves. The scene is snarky, a little sad and full of heart — perfectly matching the tone of their friendship and the film as a whole.

Lee and Jack’s friendship in Can You Ever Forgive Me? is a realistic and heartwarming depiction of friendship between members of the LGBTQ+ community. Chosen families like theirs are seldom seen on-screen, let alone shown as the primary relationship in a film. In a sea of sad films about LGBTQ+ people like Boys Don’t Cry, Lost and Delirious and Call Me By Your Name,  Can You Ever Forgive Me? stands out as a refreshing story about forgery and friendship. 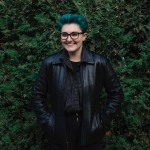 Jenni Holtz is a film critic, illustrator and master’s student in Media and Cinema Studies. They are a staff writer at In Their Own League and Flip Screen and have contributed to FilmEra and 14East Magazine. They are currently the staff illustrator and podcast host at 14East magazine. Their passions include transgender representation, genre cinema and cooking shows. They can be found on twitter, instagram and letterboxd @queerxoh.