87 Minutes of Gators and Gore, ‘Crawl’ is Fun Summer Horror

Sometimes when I’m busy admiring my pet parrot, and the fact that she, a tiny, fluffy squeaky toy, who purrs and shuts her eyes when you pet her head, is of the last remaining ancestors of the dinosaurs, I forget about the deadly creatures left virtually unchanged from their prehistoric selves that lounge in swamps down in Florida. Alligators, crocodiles, caimans and the like, though not technically dinosaurs, have remained little changed from their ancestors, and were of the few creatures to survive the meteor event that wiped out the dinosaurs 65 million years ago. Since then, though evolution continues to persist in all living things, the crocodilian family are not all that much different from their long-lost relatives. “Living fossil” is a term for them which has since been debunked, and which I believe is too tame to describe these nightmare beasts that could snap you in half with their gaping maws.

And while, in real life, the chances of being attacked by an alligator unprovoked are slim (though it does happen), there’s something delightfully horrifying about imagining the scenario all the same. Alligators are real, they exist; they aren’t an imaginary monster cooked up in the mind of a Hollywood screenwriter. They could kill you. I mean, they probably won’t, sure… but they could. These were the thoughts running through my mind as I watched Crawl, the alligator attack horror from the French director responsible for the 2006 remake of The Hills Have Eyes and the horror High Tension. Alexandre Aja’s CGI gators hellbent on murder and mayhem in the crawlspace of flooding Floridian home are as nonexistent as 90% of a Marvel movie, but if you travel down to the Everglades, you might see one lounging listlessly on a riverbank. That thought alone is terrifying enough. 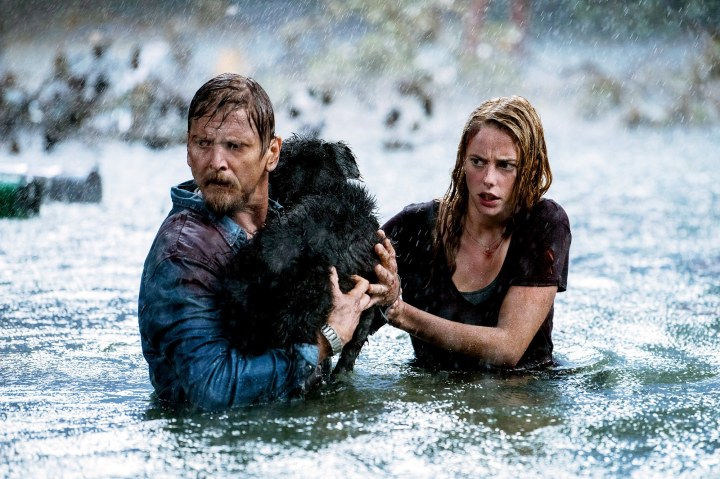 Haley Keller (Kaya Scodelario) is a competitive college swimmer, whose equally competitive father, Dave (Barry Pepper), pushed her hard in her training while she was growing up. The two now have a tenuous relationship seemingly mediated by Haley’s older sister, Beth (Moryfydd Clark), who’s been trying to get in contact with their father amidst an impending Category Five hurricane. Against Beth’s wishes and her own best interest, Haley is intent on checking their father is safe, disobeying the Florida State Police and making her way through evacuation routes to get to his condo. It’s a ramshackle sight; pill and alcohol bottles strewn about amongst a neglected mess, aftereffects of Dave’s divorce from Haley and Beth’s mother and another cause of tension between him and Haley. She finds his apartment empty save for his dog, Sugar, who she retrieves before leaving to check and see if he’s gone to their old family home.

Upon arriving at the house, she finds her father, unconscious, with a bloody gash in his right shoulder in a crawlspace below. In her attempt to pull him to safety, an unwelcome guest greets her as she rounds the staircase: a massive alligator. As the hurricane worsens and rising floodwaters threaten to submerge them both, Haley and Dave must find a way out of the crawlspace before they’re either drowned or eaten alive.

If you enjoy horror films that make you yell out loud and scream like an idiot in a cinema full of people, Crawl is absolutely the film for you. It’s like the amusement park ride equivalent of a movie; a fun, fleeting way to spend an evening or afternoon, which thrills you at every turn and only ever lets up in brief spurts until it’s finally over. Aja manages to craft jump scares that feel totally earned and totally terrifying, as the CGI alligators gnash and snap and you fear for your own safety in your reclining cinema seat. Though the gators are entirely animated, their presence feels quite tremendous, an easier feat for us, the audience, than for the actors pretending to be terrified of something that isn’t really there. But Scodelario and Pepper both sell this illusion completely, as the true-to-life monsters rip through their flesh like butter and elicit shrieks of agony that cut straight through the screen. Their relationship as father and daughter is made equally believable and, though occasionally ham-fisted, anchors the film with the necessary heart to keep you invested in these characters. 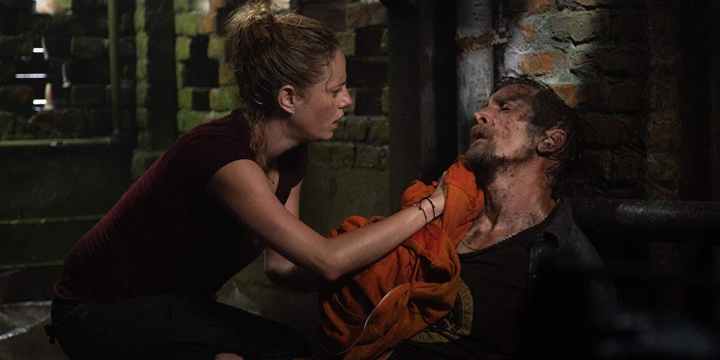 The alligators themselves feel quite unrestrained in the threat they pose to our two leads, treating Haley and Dave like their useless playthings in a hunting ground where they increasingly have the upper hand. The camera practically suffocates as Haley and Dave struggle to avoid suffocation themselves, keeping you feeling as cramped and as vulnerable as our lead characters, and wondering if a world still truly exists beyond the walls of Dave’s crawlspace. At one point, it’s as thought the pair are playing a game of ‘The Floor is Lava’ except it’s ‘The Floor is Gators;’ and there’s a particularly memorable shot of Haley caught up in a tangle of crawlspace wires with a gator hot on her tail, which was (please bear with me) reminiscent of Frodo caught up in webs as Shelob the giant spider crept up behind him in Lord of the Rings: The Return of the King.

In a summer boasting a double bill of two scary dolls that have been known to generate profits in the past, it’s a gang of bloodthirsty gators in a film that might otherwise be marketed to the SyFy channel that is much worthier of the twelve dollars you have to spend on movie tickets. It’s the most delightful way to enjoy a mere 87 minutes that a creature feature could offer you – an exciting, gruesome, near-nonstop action-filled experience with a budget of only $13.5 million (practically peanuts these days). Crawl doesn’t ask much of you other than to sit back, relax, and enjoy, which, if you’re one for obscene gore and ravenous reptiles, won’t be too hard to accomplish. It’s also genuinely fun to sit through this movie and be constantly reminded that alligators really exist, a perverse act of sadomasochism akin to The Man in Black from Westworld. The game is only fun if they can really kill you. The gators of Crawl certainly can’t, but there are plenty out there that could.

Brianna Zigler is a graduate in Film-Video and Writing from Penn State University with big plans and not a lot of planning. She loves horror, absurdism, Twin Peaks, is a die-hard Wes Anderson fan, and currently has almost 250 movies in her watchlist. Her favorite films are What We Do in the Shadows, A Serious Man, Lord of the Rings: The Return of the King, Swiss Army Man, and Suspiria. You can follow her on Twitter @briannazigs