Flaming red hair and dungarees have haunted the nightmares of a generation since 1988, and the walking talking plastic terror is back for more – only this time, he’s a Smart™ device. Director Lars Klevberg’s entry into the seven-movie Chucky cinematic universe takes the trendy topic of technophobia to Black Mirror-esque heights. Following an inviting commercial for the company Kaslan, who offer smart home devices, we are taken to a Vietnamese factory where new Kaslan Buddi dolls are being built.

After a daydreaming employee is fired, he is told to first finish the doll he’s working on. Clearly sick of the tireless hours and poor working conditions, he enacts his revenge before doing so – switching off all violence inhibitors and safety functions in the doll. What began as a take on the issue of sweatshops and poorly treated workers, quickly disappears into the horror formula. However, it certainly created an entirely new personality and motive for Chucky, who was originally possessed by the spirit of a notorious serial killer.

Alongside his Skywalker roots, Mark Hamill has voiced a myriad of villains for Marvel and DC animated series including two iconic turns as the Joker. He excels here as Chucky, indulging fully in the maniacal and over-protective programmed personality. Aubrey Plaza also stars as Karen, a young mother to our protagonist Andy (Gabriel Bateman). A nice relationship is shared between the two, and Plaza keeps it light and breezy for the most part but fails to provide the intensity required in the films final act. 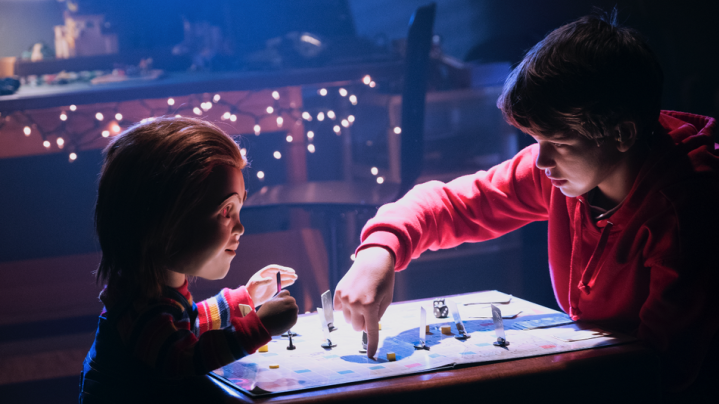 This Child’s Play can be summed up in one line of dialogue from Andy: “My phone is my primary source of education.” The interesting thing about 2019 Chucky is that his behaviour is learned; he genuinely cares for Andy and wants to remove anything that makes him unhappy. It starts off a fun E.T. inspired friendship – a reference which becomes obvious with Chucky’s glowing index finger and Andy’s red hoodie. The pair even conspire to play harmless tricks on Karen’s boyfriend who Andy despises. But things quickly turn sour when Chucky learns some problematic behaviour from the violent media Andy and his friends indulge in.

Chucky watches in wonder as they play shoot-em-up videogames and laugh at the gore of The Texas Chainsaw Massacre; in other words, he sees Andy having fun. Fun is all he wants for his ‘best friend’, and so Chucky only does what he thinks is best, even if this means recreating the violent scenes to take out anything Andy dislikes. It’s an interesting, if on-the-nose, exploration of behaviour that’s validated by the media we consume; although even Andy and his friends appear to know what’s wrong from right. For this reason, in the beginning at least, you might find yourself feeling sorry for Chucky, as he’s only doing what he’s taught. Eventually, it’s up to Andy to put a stop to the toddler-sized terror, and Bateman gives an endearing performance while excelling in emotional scenes.

When the violence gets going, it really gets going. Far gorier than the 1988 original, there’s as much blood in Child’s Play as you might find in the Saw movies, with some deviously fun slasher traps. In spite of its runtime, the film seems to only scratch the surface of both its characters and the clever narrative. Commentary on teens consumption of violent media and poor working conditions overseas are engaging when properly explored, but in this slasher homage they feel like simple plot devices. However, it’s still a riotously fun time, and especially for fans of the original, is worth watching on the big screen.

Millicent Thomas is a proud Mancunian studying Film & Publishing in Bath. She has written freelance for Little White Lies, Much Ado About Cinema, Reel Honey, and more. Her favourite films include Logan, Columbus, and Spy-Kids. Follow her on Instagram, Twitter and Letterboxd at @millicentonfilm

Categories: Anything and Everything, Reviews

‘GLOW’ In Memoriam, or How I Learned to Stop Worrying and Love Wrestling