‘Big Little Lies’ – Where does the lie lead? 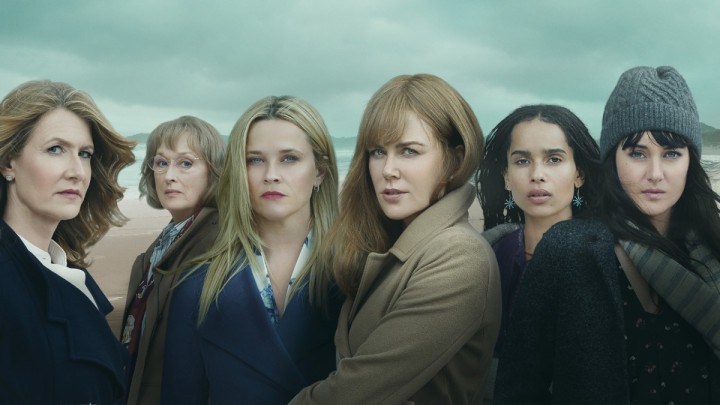 My parents always taught me that lying is wrong. It creates avoidable problems and makes you repeat it time after time until you actually believe your lie is true. But people always lie – Dr House spoke that truth. Nevertheless, there are also so-called ‘white lies’ because by not telling the truth, you shield someone you care about. The question is, are we talking about white lies in HBO’s Big Little Lies? Personally, I believe so; especially when we’re talking about The Monterey Five: Madeline McKenzie (Reese Witherspoon), Celeste Wright (Nicole Kidman), Jane Chapman (Shailene Woodley), Bonnie Carlton (Zoe Kravitz) and Renata Klein (Laura Dern). Five women. Five main characters. Five different personalities. One murder that changes their life and binds them together. Would they really be friends if Bonnie didn’t push Celeste’s husband (Alexander Skarsgård) down the stairs to defend the other four from an abusive rapist? Maybe not, we will never know. However, that is not the only thing that ties them together. The subject of rape rises and brings Celeste and Jane together closer then they thought they would be.

Big Little Lies is a masterpiece, with a fantastic soundtrack and unique cinematography. This aesthetic aspect is necessitated to tell stories of five powerful women; the story of rape, friendships, relationships, and domestic violence that leads to murder and changes the lives of The Monterey Five. After analysing such a variety of topics in only one series, I want to explore it all, because all of those aspects create the whole picture that won the show Emmys and Golden Globes in 2017.

I believe I have never seen a television series in the contemporary world that presented and depicted five female leads that are all important and all on the front line. We had Desperate Housewives that ran from 2004 to 2012, but the characters’ lives seemed to always revolve around men and affairs, whereas Big Little Lies focuses on women only, leaving their partners in the background (it may slightly change in the newest season that is currently airing on HBO). I believe this is a fantastic thing, seeing women getting more and more screen time. They all have completely different personalities. All are multi-dimensional and far from shallow.

Madeline is the bravest and loudest one whereas her best friend Celeste is rather quiet and more to herself. The interesting fact is that most people on Twitter that took part in a poll I created decided that Madeline would make the best friend. Nothing surprising – she is stubborn, extremely loyal, and is not afraid of speaking out if something is not right. Jane is soft as well (in the first season consumed by her trauma). Renata is a businesswoman, works full-time, which seems to be “horrible” to some women, because “how come she works and raises ONE child?”. Renata breaks a stereotype of a mother and shows viewers that one can have a successful life and still raise a girl. Bonnie portrays more of a hippie, down-to-earth and connected-to-nature kind of woman. She goes through a hard time dealing with her killing Perry.  She needs the support of others in her trauma; in the new season, we may get to know the reason of her doings. If you have read the book by Liane Moriarty on which the series is based, you may already be familiar with this. The show’s goal is to make women realise that they are each other’s partners rather than enemies and that it’s better to stick together, not fight against each other.

This is a remarkably important lesson, especially in a time of women’s empowerment and the #MeToo movement. The Monterey Five, although so different, reveal that trauma ties people together, but might also give something beautiful in return: loyal companionship.

Nicole Kidman won an Emmy in the category of Outstanding Lead Actress in a Limited Series or Movie in 2017. While thanking her husband and daughters, she spoke about the problem that touches many women – “(…) we shine the light on the domestic abuse. It is a complicated, insidious disease. It exists far more then we allow ourselves to know.” According to The National Coalition Against Domestic Violence (NCADV), nearly 20 people per minute are physically abused by an intimate partner in the United States. On a typical day, there are more than 20,000 phone calls placed to domestic violence hotlines nationwide. Kidman’s character, Celeste, is an abused woman who hides her so-called ‘dirty’ secret because she is terrified of her husband. Everybody thinks that they are this perfect, beautiful couple, and Celeste doesn’t want to burst their bubble. She is repeatedly strangled, beaten up, and kicked by Perry while their twin boys are in the next room. Violence leads to further destruction – one of their sons turns out to have abused Renata’s daughter, Amabella. Celeste fights, and she finally breaks – she looks for a new place to live and plans to leave Perry. However, as we know, everything changes when he dies.

Her character truly made an impact and encouraged women to stand up and fight back. I met Kidman briefly in 2018 while she was promoting Destroyer, and one of the women who talked to her was from a domestic abuse foundation and thanked her sincerely for her role and impact. A touching moment that proves the impact of the medium.

In the newest season, we may discover more about the root of Perry’s behaviour. His mother, Mary Louise (Meryl Streep) comes to Monterey and helps Celeste with boys while trying to find out what really happened to her son. She is in complete denial of Perry’s actions; she even moves to ask Celeste why didn’t she go to the police. I was personally hugely frustrated with Mary Louise’s question – surprised that the female character still dares to ask it. I can only hope we will see more of Perry’s childhood. Mary Louise seems to be a powerful stern lady. Is she going to be the one who made Perry think his behaviour was okay as he grew up? Perhaps we’ll find out.

Big Little Lies is a story about competitive parents who will stop at nothing to make their kids priority at a prestigious school. It is a story about lies, every situation that starts with a lie will probably end with one. But first and foremost, it is a tale of five strong women who are there for each other no matter what. They are incredibly loyal and supportive and, most importantly, each one of them is an example of a woman that we can identify with. Either it’s Celeste or Madeline, Jane, Renata or Bonnie, we finally have a variety of female personalities that speak to us and teach us something: unity amongst women. If we all united, we could move mountains, and I hope one day we will.