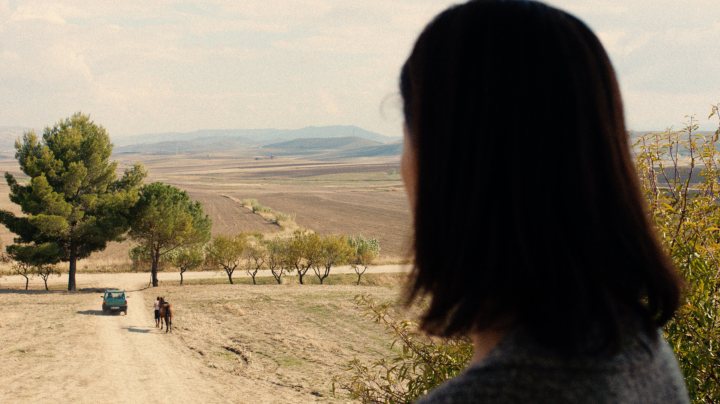 Sara Summa’s simmering Italian family drama The Last to See Them (Gli ultimi a vederli vivere) opens with a shot winding up a long dirt road, showing complete isolation through the rocky desert. Some captions onscreen quickly inform us about a family (whose home we are clearly travelling to) who were brutally murdered one unsuspecting summer evening.

With the end goal in plain sight, what is left to do now is see how the family spent their final day alive. It is a day of preparation for the Durati’s as they prepare for the eldest daughter’s wedding. Youngest daughter Dora (Barbara Verrastro) oversees the bridesmaid’s dresses and the groceries, also helping a young family friend Giorgina who comes to the house to make ricotta pie. Dora takes on quite a responsible role within the household, which is more than can be said for her mother, Alice (Donatella Viola) who suffers from extreme headaches, spending most of her days laying down or wandering aimlessly around their spacious home. Alice’s disinterest in life causes great frustration to her husband Renzo (Canio Lancellotti) who is very strict with his children, aiming to raise his son Matteo (Pasquale Lioi) to take over the family business.

There is a quiet tension that bubbles underneath several of the family’s actions, specifically Renzo, who appears to be updating his will on the day in question. Given that we know the outcome of the story, each new visitor that comes by the house mounts a new sense of worry as the audience stands idly by with this devastating information. Summa plays with a creeping sense of unease by the use of repetition. We see scenes play out from multiple characters’ perspectives, which feels like it should reveal a hidden truth or an important point we missed, but it never amounts to anything and the technique is abandoned halfway through the film.

This repetition also drives home their monotonous daily routine: Dora counting each stroke while brushing her hair, Matteo laboriously sanding down a wooden chest he intends to gift at the wedding, and Alice precisely arranging miniature objects on a shelf. The foley sounds during such moments stand out to such a heightened degree that it feels intentionally off-putting – and, unfortunately, annoying.

Summa’s desire to show the absolute basics of rural family life is driven home just one too many times, but never feels like it amounts to any form of revelations about the family’s future demise, or to build a connection with those characters. Some intentionally unnerving moments of an unknown car driving up the road scattered throughout the film also amount to nothing. The decision to shy away from a violent final scene seems slightly misguided here, leaving the film feeling anticlimactic. That gut-punch shocker to leave the audience strapped to their seats come the credits just isn’t there at all, and neither is any emotional tension.

Visions of the rolling Italian countryside are shot beautifully, so natural and light that it makes the events we know will take place all the more harrowing. Sadly, the dreary pacifist approach on display in The Last to See Them very quickly feels like a non-event in its familiar home-invasion set-up.