‘The Farewell’ is a Gentle and Loving Film About Goodbyes 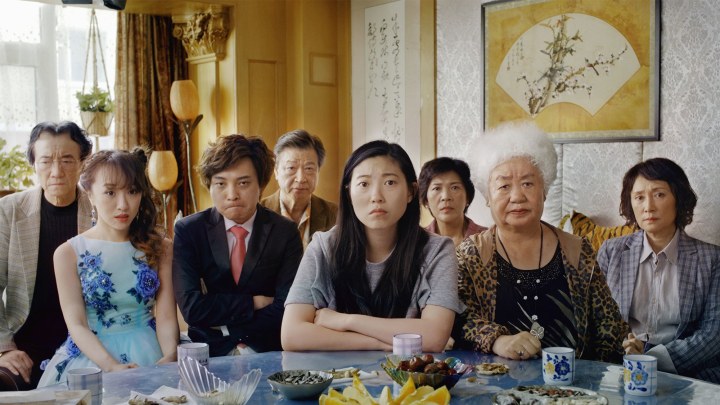 Lulu Wang’s The Farewell takes little white lies to the next level. What if a lie holds someone’s best interest at heart, but is gargantuan in size? Billi, played by Awkwafina, navigates this dichotomy as her family forces her to lie to her ill grandmother. Nai Nai (Shuzhen Zhou), beloved matriarch of the family, has just been diagnosed with cancer. In an attempt to give her the happiest ending, her family plots to keep this from her. Instead of a funeral, they stage a wedding. “When people get cancer, they die”, explains Billi’s mother (Diana Lin) as she breaks the news. “It’s not the cancer that kills them. It’s the fear.”

From the moment she enters Nai Nai’s full home in China, Billi herself is filled with fear. She carries a heavy lump in her throat, terrified of ruining the facade her family has crafted around Nai Nai. At a dinner table full of repressed mourning, Nai Nai is bubbling with excitement, she is ready to take control of her family. The opportunity to plan her grandson’s wedding is the perfect farewell gift for Nai Nai, who is stubborn, driven, and above all else, devoted to making her family happy. The rest of the family, on the other hand, is clearly struggling to reach the level of happiness she expects of them. Nai Nai worries about everyone, concerned with the family dynamic.

She takes a special interest in Billi’s life — above being family, they are also friends. As Hao Hao (Han Chen) has his wedding portraits taken, Nai Nai whispers to Billi that she’ll plan an even bigger celebration for her. She’s the special grandchild, and the chemistry the pair share on screen is delightful. Yet, this companionship adds pressure to Billi’s part of the lie; the close-knit friendship she shares with her grandmother makes it hard for her to find any benefit to lying. Most of Billi’s life with her grandmother has been spent in short bursts on vacations. Now, she and Nai Nai visit via phone calls, but the gap between their lives is certainly present. While Nai Nai sees Billi’s visit as a chance to bond like old times, Billi is forced to give a backhanded farewell as she also attempts to bridge the distance between their lives. Where The Farewell soothes, it also stings.

As an onlooker of the family gatherings, it is hard to identify with any one side – Wang unpacks every side of the lie, from Billi’s feelings of betrayal to her Aunt’s determined drive to keep Nai Nai’s spirits uplifted. Normally, a huge family dynamic would be a lot to process in a short 98-minute runtime. Wang’s writing and directorial style, however, balances this with ease. The Farewell is an ensemble piece that devotes ample time to crafting each member of its ensemble – we see different sides of every single character, and yet, we are also able to see the shared personality traits of the family. The film is eloquently layered, with Billi as the guiding light between each separate action; Awkwafina maps uncharted territory in her acting range with a raw, down-to-earth role. The family has history; Wang clears this through the action of her characters, but the dense exposition is never weighty or dull.

Distance also complicates the lie. In an extremely effective comparison between Eastern and Western ideologies, Billi spearheads the idea that lying to Nai Nai should arouse qualms. Billi, who lives alone in New York, is focused on the condition of the individual. Her father convinces her that she is wrapped in Western ideals, and in order to understand the necessity of lying, she must perceive her family as a collective whole. She is a singular part of a larger entity devoted to Nai Nai. Billi struggles to trace her roots, the once-opportune New York now lacks a promising career or money, but the misunderstanding of her family is equally unwelcoming.

Though it is ultimately a film about goodbyes, The Farewell is not melancholic. It is not weary, nor over-dramatic. It is as bright as its pastel colour palette; Wang wraps her story in a tender script and delivers the package as a soulfully earnest film. Each scene is gentle, each moment intensifies the family’s complex love for Nai Nai. It is hard to label The Farewell as a ‘dramedy’, as it does not devote itself wholly to either of these genres. The humour within the family dynamic can be quick as a whip, but the throbbing lie lingers like a bad headache. Wang handles her direction between these seamlessly – as if she’s had to do it before.

Originally from the suburbs of Chicago, Fletcher is now living in New York working on her BA in Cinema Studies. As for hobbies: she loves crossword puzzles, seeing low-budget off-off Broadway shows, and when she’s at home, annoying her cats. Her favourite films primarily come from screenings her parents held for her growing up — from Rear Window to Ferris Bueller’s Day Off to Raiders of the Lost Ark. She’s also a fan of everything Star Wars related. You can find her on Twitter, Letterboxd, and Instagram.