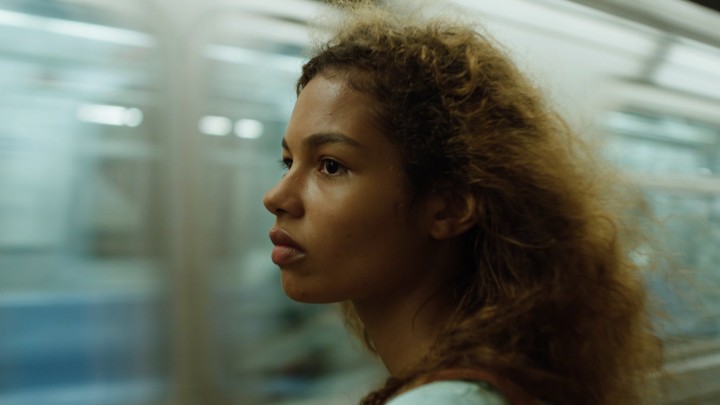 “What you are experiencing is just a metaphor” – words repeated endlessly by various characters in Josephine Decker’s festival-favourite Madeline’s Madeline, a colourful explosion of uncertainty. From the very beginning, it’s all a blur. Madeline (a star-making debut from Helena Howard) is a budding actress. Her mother Regina (Miranda July) picks her up from rehearsal every day and the pair bicker for the rest of the evening. Madeline’s relationship with her mother is immediately ambiguous. A hazy stylised scene before the title card hits suggests that Madeline attacks her mother with an iron; this is later revealed to be a dream when she recounts it to her director Evangeline (Molly Parker) in the hopes of gaining some closeness to her.

Madeline has a history of mental illness, and Regina  (to Madeline’s annoyance) acts as a carer, keeping track of her meds and her food intake. Acting is where Madeline is happiest; becoming something else is her mechanism for dealing with what is going on in her head; which the audience are sometimes let in on. Throughout the film she is rehearsing an experimental contemporary piece which sees her and her castmates embody various animals, wearing freakish pig masks and improvising feelings and phrases such as “no way out”.

Both in and out of the theatre Madeline is completely fearless. She lacks caution, taking boys into her basement to watch porn and surprising them with kisses on piers before running away. This is all to the horror of her terminally panicked mother. July is meek and mild as Regina, her big blue eyes almost always on the verge of tears, and rightly so. Madeline and Regina’s moments together often end in shouting or crying from both parties, and it’s sometimes difficult to empathise with either of them. Perhaps Madeline is too harsh on her mother; she’s often violent, throwing things and ripping out clumps of her hair, but is her mother too controlling? Or too caring? Madeline’s violent outbursts are handled sensitively – it is courageous to portray the messy and complex navigation of a young woman’s mental health – but the sheer brutality of Madeline’s actions is often unsettling.

Decker does not shy away from making the audience uncomfortable, and in Madeline’s Madeline she approaches difficult questions of ownership. Evangeline, the director and maternal figure Madeline looks up to,  is completely fascinated by the budding actress and her relationship with her mother. So much so that her production evolves into a story “about mental illness, Madeline will play the lead.” This is an idea that the rest of the cast are visibly uncomfortable with after an explosive improvisation from Madeline where she is made to play Regina. They ask her, “Are you comfortable with us telling your story?” She is silent, a vulnerable teenager sat on the ground with a blank stare, something Evangeline seems energised by. But it provokes the audience – who gets to tell whose story?

Seemingly unaware of Madeline’s history with mental illness, Evangeline consistently encourages her to dig deeper into her raw emotions; so far that it becomes glaringly insensitive and reckless. It’s almost exploitative that she is asking so much vulnerability of the 16-year-old, purposely causing further destruction to her relationship with her mother for the sake of ‘art’. It is so easy to then dislike Evangeline, begging the question: who on earth are we supposed to like in this film? Decker makes it disturbingly impossible for the audience to judge the situation; they are deep in Madeline’s subjectivity, and it’s a terrifying and new feeling that completely obliterates what we think cinema should be. The film feels unkind, and it’s not a feeling that will sit well with all.

In its final moments, Madeline’s Madeline allows its audience some relief; emboldened by her director’s infatuation, Madeline takes the first steps in reclaiming her own identity. Bold and experimental, it is a real experience, but not one that begs reliving. However one might feel about the film itself, it can be a truth universally acknowledged that Helena Howard is a marvel and a force of nature.

Madeline’s Madeline streams on Mubi from May 10th

Millicent Thomas is a proud Mancunian studying Film & Publishing at Bath Spa University. She has written freelance for Little White Lies, Much Ado About Cinema, Reel Honey, and more. Her favourite films include Logan, Columbus, and Spy-Kids. Follow her on Instagram, Twitter and Letterboxd at @millicentonfilm