It’s been over two years since the first season arrived on Netflix and now, Brit Marling’s mind-bending The OA returns. You’d be forgiven for forgetting what on earth happened. And Marling, who is co-creator, executive producer and plays the title role, isn’t going to take your hand and guide you through it. Part II is bolder, grander, and far weirder than its predecessor. If you weren’t on board with a bizarre interpretive dance with the power to raise the dead you might struggle with parallel dimensions, magic mirrors and animal telepathy. But for those willing to embrace the oddness it’s as beautiful as it is baffling.

When last we saw her OA (aka Prairie Johnson, the formerly blind daughter of a Russian mobster) she was being rushed to hospital having been shot in the chest, miraculously the only person harmed during a school shooting. She’d entrusted her story of being kidnapped by a scientist hell-bent on unlocking the secrets of near death experiences to four high schoolers and one teacher, an unlikely band of lonely misfits. The finale ended on a cliffhanger: was she delusional or really capable of jumping into alternate dimensions? Would she be able to save Homer (Emory Cohen) and her other fellow captives?

Thankfully, some elements of the mystery are cleared up pretty quickly. Part II sees OA thrust into the body of Nina, her doppelgänger in an alternate 2016. With all her talk of dimensions,“Nina” is soon committed to a mental institution along with her cellmates from the first season, once again imprisoned by the sinister Hap (Jason Isaacs, bringing a steely malevolence). But why is Homer, now Hap’s assistant, the only person who doesn’t remember her?

Meanwhile, Karim Washington (Kingsley Ben-Adir), a jaded private detective, pursues the disappearance of a young woman and becomes embroiled in a sinister Silicon Valley conspiracy featuring a mobile game that drives its players mad. And back in Part I’s dimension, Betty (the wonderful Phyllis Smith) and the teenagers, bereft by OA’s disappearance, receive an otherworldly message and embark on a road trip with tragic consequences.

The plot verges on overly complicated, but visually stunning set pieces are engaging enough to make up for yet more layers being added to the mystery. Chapter 5, The Medium and the Engineer, sees OA and Karim venture into a labyrinthine house and face a sequence of puzzles that pull them deeper into a dream-scape, while a telepathic encounter with a giant creature called Old Night might be this season’s most bizarre and memorable scene. Part II’s closest relative might be 2017’s Twin Peaks: The Return, although thankfully The OA treats its female characters far better.

The San Francisco setting of Part II feels truly a dimension away from the permanently overcast small town of Part I. Scenes glow with low sun filtered through blinds, and greys and muted purples have been exchanged for gold and burgundy tones that evoke Californian noir a la Chinatown. Brit Marling remains a compelling lead, managing to say cliched lines like “Logic is overrated” with such earnestness and conviction that it’s hard not to be drawn in. But she still feels ethereal and unknowable, and the season suffers from relegating Betty and the high schoolers to more minor parts. Patrick Gibson as the troubled Steve still has opportunities to shine though, injecting the drama with much-needed heart. Steve seeing the sea for the first time and joyfully sprinting into the waves is a genuinely moving respite.

Science and faith collide in a Meta finale that will have many throwing their hands up in exasperation. But even at its most perplexing, The OA Part II still manages to be gripping and occasionally affecting. For those willing to believe in her strange world and take that leap of faith, it is a wondrous, if sometimes frustrating experience. 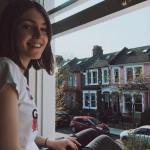 Laura Venning is a Film and TV Production grad from London about to embark on a Film Studies MA. She’s particularly interested in female directors and Australian and New Zealand cinema. Her favourite films include A Matter of Life and Death, The Piano, Picnic at Hanging Rock and Cléo from 5 to 7. You can find her on twitter at @laura_venning

The Body Remembers: Trauma and Fame in ‘Framing Britney Spears’ and ‘This Is Paris’

‘The Owners’ Features an Insane Take on the Home Invasion Trope

“Are you satisfied?”: ‘The Laughing Woman’ and the Search for Satisfaction in the Battle of the Sexes