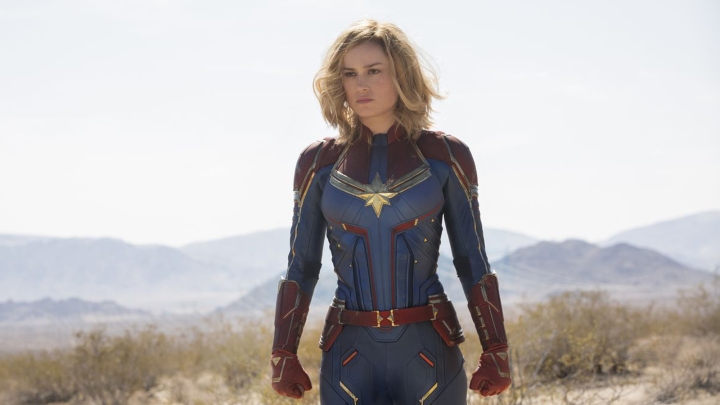 After 11 years and 20 (almost) consistently brilliant films, Marvel Studios have finally gifted audiences with a film featuring a female lead. In Captain Marvel, Oscar-winner Brie Larson takes on the role of Carol Danvers, aka Captain Marvel.

We meet Danvers on the Kree planet of Hala, training with the elite Starforce. Here she is called Vers, and she remembers nothing of her past before she arrived on the planet 6 years ago and began her training. The only goal she knows is to defeat the Skrulls, a race of shape-shifters who she’s told are infiltrating Kree border planets in a bid to take over. After a botched mission, she’s captured and ends up crash-landing on planet C-53, better known to us as Earth.

The more MCU films we get (no complaints here) the harder it will be to make an origin story that doesn’t feel like an origin story. Captain Marvel hits all the regular beats, she’s a hero discovering her true identity and her true potential – but that isn’t to say it’s predictable. The stubborn and quick-witted Danvers isn’t only fighting for her identity, she’s reclaiming it. Only so much can be said without spoilers, but Larson brings an explosion of life and wonder into the role and is a perfect fit into the world directors Anna Boden and Ryan Fleck have created.

Samuel L. Jackson reprises once again his role as S.H.I.E.L.D agent Nick Fury. Jackson and Larson make for a fun, buddy-cop style pair that are endlessly watchable. As the primary co-star, we also get an interesting glimpse into the history of Fury, the beginning of his Avengers initiative, and most importantly how he got that eye-patch. As Skrull general, Talos, Ben Mendelsohn also oozes charm and confidence, and shares fantastic chemistry with Larson.

The most compelling relationship, however, was that shared between Danvers and her best friend Maria Rambeau (Lashana Lynch). When Wonder Woman put its lead with a bunch of men and gave her a boyfriend, Captain Marvel gave its hero a real family. Danvers, known to Rambeau’s endearing daughter as ‘Auntie Carol’ feels like a beacon of hope wherever she steps foot. For centuries, women have been called hysterical for showing feelings, and Danvers is consistently told her emotions are what make her weak – making it completely exhilarating and cathartic when she inevitably proves otherwise.

Captain Marvel doesn’t just feel timely for women, but with themes of refugees, border control, and the military, it offers more than one political thread. It may also be easy for the majority to dismiss the film as a cash-in on feminism – with anything starring a woman being heralded as a ‘#metoo movie’ – but it’s hard to care when you remember the target audience. All that the children watching will see is a woman who earned her power through her brave actions, not through the men who seek to control her, one who can protect others and seek justice where there is none.

Captain Marvel doesn’t feel as fresh as hype suggested, and perhaps isn’t quite as sure of itself as Black Panther, but it lays exciting groundwork for what will be a fantastic addition to Endgame and the MCU.

Millicent Thomas is a proud Mancunian studying Film & Publishing at Bath Spa University. Hobbies include video-games, theatre, and waiting for Charles Xavier to show up and tell her she’s the world’s most powerful mutant. Her favourite films are Her, Logan, Columbus, and the Spy-Kids trilogy. You can follow her on Instagram, Twitter and Letterboxd at @millicentonfilm