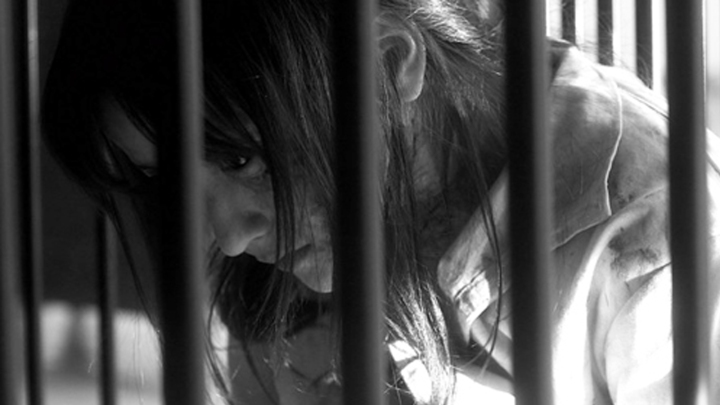 Miss Zombie is an austere ode to motherhood set in futuristic Japan where zombies are domesticated as pets or slaves for wealthy families. Sara arrives at the home of her bourgeoisie owners—a doctor, his quiet wife, and their rambunctious son—inside a cage that comes along with strict instructions not to feed her meat because she will become feral and a gun for protection lest she does. She glares up at her new captors with sunken eyes and stringy hair hanging in her mangled face. Each day after her arrival, Sara lethargically trudges to a stone floor outside the house that she unceasingly scrubs. Yet no matter how persistent her effort, it never seems to get any cleaner. The hypnotic sound of her endless brushing carries throughout the film and into the end credits, a pestiferous noise that encapsulates the tedious melancholy of her undead state.

When not working herself to the bone, Sara endures with a startling apathy the vicious assaults of neighborhood children who throw rocks and stab her in the shoulder. Much of her time is spent quietly sewing together the wounds of her decomposed skin in a taciturn, matter-of-fact manner. She suffers more at the hands of the other workers on the estate who repeatedly rape her after ogling her derriere when she bends over to clean the floor. Even though Sara is dead, the vessel of her female body is not immune to the dangers of the patriarchy. Writer and director Sabu never allows this plotline to descend into exploitation, often keeping the awful act itself obscured in the frame. We get a sense of Sara’s internal conflict beneath her torpid surface when we see her nostalgically gaze at an old photograph of her former self as a radiant, beautiful pregnant woman before going to sleep each night.

Sabu renders a bleak mise-en-scène that evokes Sara’s miserably vapid life after death in the minimal discordant music, stark black and white visuals, and sparse dialogue. The sharp cinematography brings the dark beauty of Sara’s monochromatic world to life, often focusing on minute details such as the way the dust dances in a shaft of sunlight. Yet Sabu remains distant from Sara, his roving camera rarely framing her in full view and zooming in on random parts of her deformed body or only half of her decomposing face. This renders a sense of uncanny sorrow, as if it is too painful to fully witness her agony.

The monotony of Sara’s insipid life is broken when the son of the household, Kenichi, becomes increasingly attached to her—much to the chagrin of his mother Teramoto—and the two find themselves vying for the young boy’s affections. Tragedy soon strikes Kenichi and only Sara can save him in a rash action that awakens her long-buried human instincts and sets the thrilling finale into motion. Actress Ayaka Komatsu portrays her character’s transformation from a numb and rigid puppet-esque figure to someone propelled by love and selflessness with an unsettling intensity. Sabu’s minimalist screenplay dexterously uses uses the prosaic banality of the film’s first half to build towards a mind-blowing ending with an emotionally potent use of color. The finale shades in the tragic backstory of our soulless heroine, and we learn that her own life as a mother was tragically cut short. Miss Zombie has an entrancing gloomy atmosphere and uses its leisurely pace to build towards a bravura finale that situates it alongside Train to Busan as another thrilling and heartbreaking work that explores the humanity lurking inside the living dead.