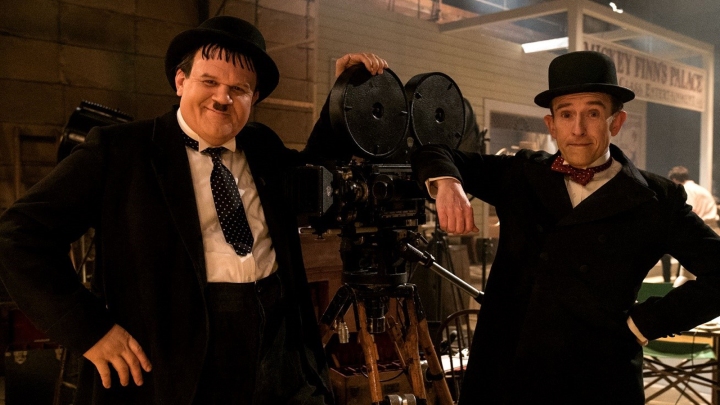 Often ranging between ‘legendary’ and ‘eternal’, many labels have been attributed to this master-duo. However, Stan and Ollie gifts us a poignant and supremely intimate portrayal of the men who embodied beloved comic titans ‘Laurel and Hardy’. They were to comedy what The Beatles were to music; their silhouettes being just as iconic as their contemporaries, Charlie Chaplin or Buster Keaton. The opening of the film seems to be aware of this as we trail in their wake through a bustling 1930’s Hollywood film set; the strong outline of two figures in bowler hats, one ‘bigger’, the other ‘thinner’, immediately conjuring a warm, familiar image. It serves as a gentle nudge into their intangible world, an undoubtedly daunting task for director John S. Baird to undertake. However, the film chooses to explore the more compact, latter chapter of Laurel and Hardy’s professional lives rather than their entire career.

With their fame in decline in the 1950s, Stan and Ollie embark upon a gruelling UK theatre tour in order to fund an upcoming (though ill fated) movie project. Unbeknownst to them and the world, it would become their swansong, a homage to nearly thirty years of graft and genius. As well as this, paralleling their professional tribulations, deep rooted resentment underlies the pair’s relationship, threatening to shatter their life-long bond on and off screen. Its bitter-sweet, witty, and often melancholic, echoing other British period-drama biopics such as Nowhere Boy and Film Stars Don’t Die in Liverpool; the tone manages to capture a glowing nostalgia without being overly precious.

Written by Jeff Pope, who also penned Philomena, it successfully balances pathos and humour with an impact that almost teeters along the lines of whimsical, echoing golden-age Hollywood dialogue. For example, there are sharp one-liners in abundance, “We’re going shark fishing – Mr Laurel doesn’t know it yet but he’s the bait”, all delivered with impeccable comic-timing. There are magical moments too in which Laurel and Hardy’s transcendent routines weave their way into the narrative. For example, the unforgettable piano-up-the-stairs sequence from The Music Box is subtly payed homage to as Stan and Ollie try to haul a hefty trunk up a staircase before boarding a train. Satisfying our delight in playful irony, it trundles back down to the ground with a crash, an echo of past hilarity. Furthered in a new skit choreographed specifically for the film, Laurel and Hardy’s classic humour resurfaces again as Steve Coogan (Laurel) and John C. Reilly (Hardy) execute a brilliant farce involving a bundle of suitcases, a revolving door and a near-bust-up over a desk bell. The film knows who it’s paying tribute to and in the most wonderful sense, life truly does imitate art.

The two leads go beyond mere impersonation, capturing not only Laurel and Hardy’s iconic on-screen personas but also unearthing naturalistic portrayals of the men who arguably became eclipsed by their own movie star image. From Laurel’s long hapless-faced head scratch to Hardy’s dainty tie twiddles, their physicality and gestures are masterfully conveyed. There’s a tangibility to the chemistry that flows between them. The film also sports a sparkling supporting cast with Shirley Henderson playing Lucille Hardy, fiercely protective and fabulously shrewd. Also, Rufus Jones, who portrays buttery, smarmy agent Delfont, simultaneously inept and endearing. Special mention must also go to the scene-stealing Nina Arianda who plays Ida Laurel, a narcissistic diva with a loving streak, she’s incredible in this and has been shamefully overlooked this awards season.

However, despite the warmth and kookiness implemented by the performances, the more serious undertones of the story invite some truly heart-breaking moments. The tense fight scene between the boys holds an atmosphere that is as bitter as it is devastating, as they take aim and fire in order to truly hurt one another, despairing at their crumbling friendship. It’s uncomfortable to witness, a private moment painfully exposed. However, there are also more melancholic scenes that prove just as striking. For example, during their final stage show in which they re-enact the famous dance scene from Way out West. As the camera swoops down to their shadows on the floor, it’s as though the ghosts of the real Laurel and Hardy are briefly brought back to life for us; dancing behind Coogan and Reilly, cheekily mirroring their contemporary hosts. It’s a wistful farewell and tribute, amalgamating actor, character and legend, exemplifying the enduring love and admiration for this odd-ball couple, even today over sixty years later.

Steve Coogan recently stated that Laurel and Hardy are really only admired by those ‘above the age of forty’ and that he hoped that in doing this project, would encourage younger people to appreciate them more. I suppose this is true, though I find myself to be an anomaly to this. I grew up with them playing in the background, introduced to them by my Nana and parents respectively. Immortalised in black and white, they’re lovingly displayed and looked back on fondly, almost as you would photographs of old family friends. Stan Laurel was born and raised not far from where my Nana lived for most of her life, and where I subsequently spent most weekends of my childhood. He’s become ingrained into the North East’s identity, commemorated by the much-loved statue in Dockwray Square, North Shields. Time will tell if Coogan’s hope comes true, but for now, those who loved them before won’t be let down by Stan and Ollie.

It’s a quiet film, poignant and charming, a deeply revealing glimpse into not only the previously unexplored latter career of Laurel and Hardy, but also the touching, long-lasting friendship they shared. Therefore, the film serves more as an understated ode to the warmth of their legacy rather than a garish epic that swallows itself up in sentimentality and self-importance. Young or old, this film will move you. Despite the pensive subject matter, Stan and Ollie is far from depressing – it’s uplifting and gentle, a celebration of their work and brotherhood rather than a sombre reflection on the duo’s twilight years. It’s a heart-warming tale, a golden nugget of a movie that proves to be the perfect cure for the winter blues.