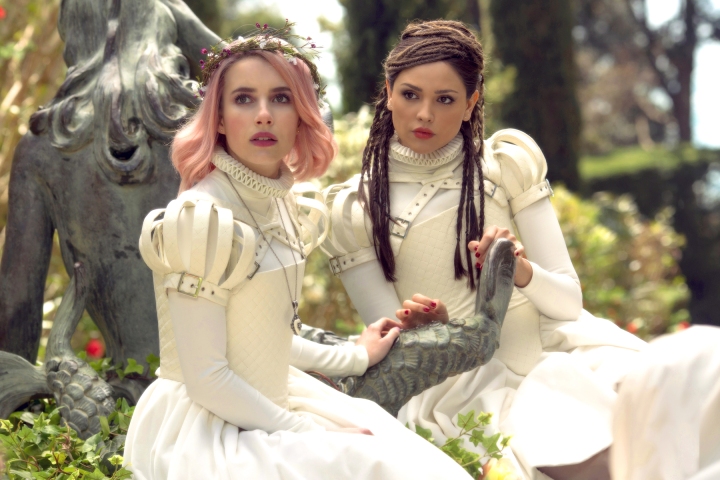 If nothing else, Paradise Hills is original. It’s almost shocking that this isn’t an adaptation or remake. How many modern day science fiction/fantasy films can say the same? Nearly every movie in these genres over the last decade has its origins in a novel or earlier film/series. However miscalculated and messy this film might ultimately be, it’s difficult not to be impressed that director Alice Waddington and writers Brian DeLeeuw and Nacho Vigalondo had their own creative vision for a new world and created it, rather than relying on someone else’s work.

That world is a futuristic, aggressively class-based society in which technology has elevated to an extraordinary degree. Enter Uma (Emma Roberts), a member of the ‘upper’ class, whose family is at risk of losing their wealth. She has been sent to Paradise Hills, which at first glance appears like a gorgeous island resort, but in reality is a sort of hybrid charm-school and conversion camp that’s far from voluntary.

It’s her unwillingness to follow her mother’s wishes and marry a rich, but horrid man that has landed her here. Upon meeting the other residents, all young women, she finds it’s a similar situation for everybody. They’ve been sent here by family or colleagues for not adhering to their ideal of womanhood. Uma makes fast friends, played by Danielle Macdonald, Awkwafina, and Eiza González. Together they participate in the mandatory yoga, makeovers, meals, and therapy-esque sessions, but soon realise something far more sinister is going on and the program’s director, The Dutchess (Milla Jovovich), may be behind it.

The idea is intriguing, at least at in its beginning, but ultimately is so poorly developed and written. It becomes an almost childish piece filled with cliches. The message of being yourself and not needing to change for others is hammered into the audiences brain to the point that it gives them a headache. The pacing is so off that it feels significantly longer than it’s roughly hour and a half run-time and the conclusion feels rushed and unsatisfying.

Unfortunately, the performances aren’t much better. Everything and everyone here comes across as rather fake and stale. It’s difficult to believe in the characters and their relationships or the danger they’re supposedly facing. But given the awkward and cheesy dialogue the actors had to work with, it seems unfair to hold them fully accountable; if anyone stands out it’s Awkwafina, her comedic moments at least land, something no one else here can really say.

What is worth praising here though is the distinctly female approach. This is an unabashedly women-centric story, unafraid to show its feminine side. The cast is almost entirely made up of women and its design reflects that. The outfits and sets utilise flowers, lace, gauze, and shades of pink and white with elaborate and colourful hairstyles.

When Waddington introduced the film before it’s screening she told the audience as a child she loved fantasy novels and films, but felt she never saw herself reflected in those characters and wanted to change that here. She dedicated this work to nerdy, LARP-ing girls, saying now “it’s our time to play.” And despite Paradise Hills not being perhaps the best quality film, that’s an admirable goal, and one that she did succeed at, which will hopefully reach a younger female audience.

Jennifer Verzuh is a writer who’s spent the past year and a half traveling across the US working at film festivals after graduating college, where she studied literature and film production. Some of her favorite movies are Carol, Ida, Jackie & Nashville. You can follow her on Twitter at @20thcenturywmn or letterboxd.