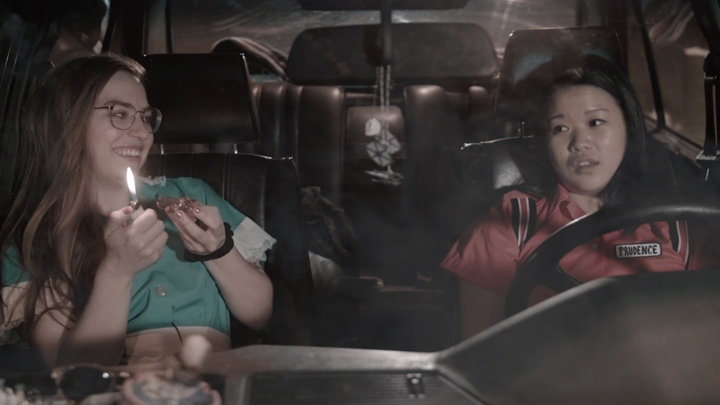 Feeling powerless and trapped by a man at a bar is a horrifying experience almost universally shared by women. When they don’t understand the meaning of the word “no”; how to back off and move on to someone else; or just how frightening they can be as they reassure us repeatedly they really are a nice guy, there comes a terrifying tone-deafness that is undeniably familiar for many, and it’s an excellent source for horror. While a kind that could, perhaps, hit a little too close to home, a scary but uniting experience such as this is what anchors the entirety of director Kate Beacom’s All Men Must Die. The fear that is derived from men who can’t be let down easy, but the satisfaction that would come if we could easily beat them to death and keep them away from us forever.

While they kick back and relax in their car, our heroines, Prudence (Alex Song) and Kyle (Lacey Jeka), smoke a bowl and prepare to have a fun night out drinking and enjoying each other’s company, in celebration of Kyle’s birthday. But what man would ever want that for a woman? And while waiting on a drink from Prudence that night at the bar, Kyle is approached by a strange dude (Brett Davis) in a backwards baseball cap (bad sign) who doesn’t seem to be understanding her closed off social cues – or, more likely, doesn’t care. Prudence returns with their drinks and the pair leaves the scorned man alone at the counter as they join the rest of their friends close by, but the strange man soon appears again. As Prudence and Kyle chat by the bathroom, they’re forced into another awkward, creepy encounter with this nameless man, before being gifted another excuse to leave him hanging.

After loitering outside the bar in the back alley, eating birthday cake with their friend Dan (Griffin Newman) and discussing how Prudence doesn’t feel like she’s matured very much since she was young, Lydia expresses that she isn’t feeling well and requests to be left alone in the alley to barf to her heart’s content. It’s at this point that the creeper comes knocking for a third and final time, this time more forceful, more physical and intimidating. He assures Lydia over and over that he’s genuinely nice, as Lydia looks away from him in fear. But it’s Prudence who comes to her rescue with a trusty brick in tow, and soon Prudence’s face is covered in thick red splotches of blood and the strange man will coincidentally creep nevermore.

All Men Must Die feels mostly akin in quality to a student film, with production design, sound quality, effects, lighting, coloring, and most other technical aspects on the lower end of the spectrum, but it’s bolstered by delightful animations interspersed throughout, and a satisfyingly heavy metal theme track to accompany the film’s subject matter, apt title, and general tone of sweet, sweet vengeance. It’s also a fairly straightforward and simple story, with the film’s “shocking” ending more or less predictable, but it’s that end result that feels supremely rewarding.

Watching a woman beat a terrifying man with no concept of consent to a bloody pulp might not be a means to an end one should seek in reality, but it feels quite cathartic to watch it on screen. The experience of being a woman and not being able to exist nearly anywhere without the potential of some creep following you or worse, is a reality that many of us have to live with. To picture ripping them apart so that they may never harm another woman again feels like the answer in a utopian society; alas, killing people is “wrong” and “illegal.”

All Men Must Die screened at the Final Girls Film Festival in Berlin on February 2nd.

‘Inez & Doug & Kira’ Is A Contemplative Melodrama Without an Easy Resolution

‘The Mentor’ is a Bitter Satire on the State of Cinema

NYFF ’20 — ‘The Calming’ is a Serene, Exquisite Recreation of its Title