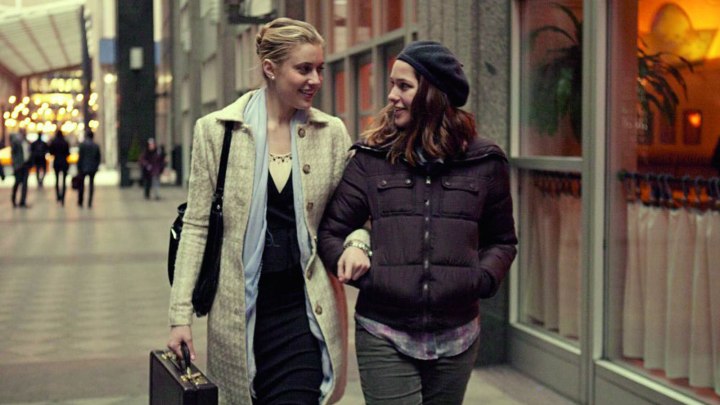 Mistress America is often confused in its tone. From the same aimlessness of young adulthood seen in another Greta Gerwig/Noah Baumbach writing collaboration, Frances Ha, Mistress America also has its screwball comedy moments. This somewhat detracts from the more dramatic moments of the film. However, perhaps that is the point.

Tracy (Lola Kirke) does not know whether she’s Brooke’s (Greta Gerwig) sister, friend or biographer, whether she wants to be everything like her or nothing like her. Positive representations of women on film can be hard to come by, but Mistress America demonstrates how blindly positioning a person on a pedestal has emotional repercussions for both oneself and the object of one’s fantasies.

Brooke felt less complicated in her relationship with Tracy. Whilst she enjoyed being a caricature of herself, the female flaneur, she ultimately saw Tracy as her soon to be step-sister, her friend. But, at the same time there was performative Brooke. She has too many friends, parties, ideas … she speaks in epigrams, seemingly expressing wisdom. It is a self-aware performance. She says towards the screwball climax, “there’s nothing I don’t know about myself. That’s why I can’t do therapy.” The implication being that she might actually need therapy. Indeed this view is reinforced  when the two female leads come across an old schoolmate of Brooke’s, her independence is expressed as selfishness when she is accused of bullying. Brooke’s response is not to apologise but to reaffirm her sense of self righteousness:

“Yeah. I was so popular in high school but I didn’t try AT ALL. People just wanted to be friends with me. I didn’t even care about that stuff. When someone told me I was popular I was like ‘Really? Weird.’”

This seems to contradict and reinforce Brooke’s belief there is “nothing” she doesn’t know about herself. On the one hand, she says her younger self had no idea about her popularity whereas now she uses it as a means of defending herself against accusations of bullying but then on the other she knows the currency of popularity in High School. She knows she is wealthy in this way. This kind of coldness is what Tracy begins to aspire towards much to Brooke’s dismay. The revelation that Tracy has been using Brooke as the subject of her writing and is what removes Brooke’s facade of superiority. Tracy accuses Brooke of never taking responsibility for her actions, as was the case with the girl from High School. Brooke’s defence is that her confidence has been used, her life exploited for the purposes of fiction… her performance is meant to be enjoyed but not commodified. This is not an attack of Tracy in favour of Brooke but rather a defence of Brooke’s flaws. She is selfish, she is cold, she is a woman. This is the point of Mamie-Claire’s (Heather Lind) critique. Whilst she is Brooke’s love rival, Mamie-Claire finds fault in Tracy’s portrayal of women in her fictionalised account of their time together. Tracy’s idealisation of Brooke prevented her from understanding her as a fully rounded human being. She didn’t acknowledge her vulnerability or ability to be hurt – in idealising her, Tracy lost her empathy – what she didn’t realise is that Brooke idealised her too.

The break down of the relationship between the two women mirrors the failure of their respective parents relationship. However, this relationship taking place off screen, enhances the audience interaction with platonic rather than romantic love – rather like Frances Ha. Their reconciliation, despite the continuing rapid dialogue, is in the mimesis. Tracy doesn’t feel that sorry, Brooke questions whether their time together will even matter in the long run, they both wonder what their future holds… but it ends with a quiet Thanksgiving where they are, most importantly, together. Despite the romantic nature of both Gerwig and Baumbach’s relationship, their best work occurs when friendship, indeed female friendships, are at the narrative centre.