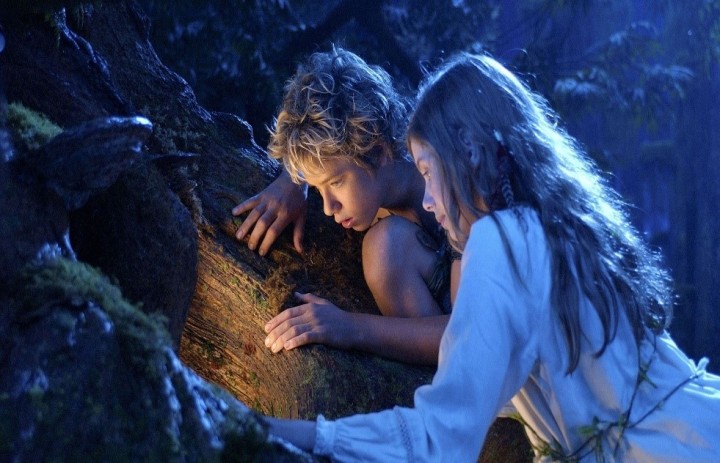 Celebrating its 15th Anniversary this Boxing Day, P.J Hogan’s adaptation of Peter Pan is still as rich, fearsome and enchanting as ever. Being aged six when I first saw it, it’s been a film I’ve grown up with and always remembered fondly. However, after revisiting it, I was surprised at how mixed the reviews were upon its release, ‘The film is rather a mess, despite odd enjoyable moments. There is obvious technical magic in the often kitschy special effects, but nothing magical in the atmosphere (…) most kids will be bored for much of the time’ (Phillip French, The Guardian, 2003). I can say confidently that I, and most other kids my age didn’t fall under this generalisation.

Penned by J M Barrie, Peter Pan premiered onstage in 1904 and over a century later still lingers in the imaginations of audiences, weaving together generations. Characters like Peter Pan and Captain Hook were some of the first I encountered, not only sparking my imagination, but shaping it. They inhabit an exciting world, a concoction of magic and danger stirred up by fairies, mermaids, pirates and ticking crocodiles. They all seem to pop up in children’s stories, but very rarely together and maybe that’s part of Pan’s appeal.

Although first appearing as a silent film in 1924, perhaps the most famous film version is the Disney cartoon classic. I was a huge fan of this one, often playing it on repeat when I was younger. It’s a bouncy, twinkling fantasy, but looking back, it definitely ignored the more serious elements underpinning the story, as Ian Nathan pointed out in Empire, ‘it’s a fully transporting fable that serves the play well, but in truth is divorced from the darker strains in Barrie’s work’. True, it’s an animation aimed at kids, but Disney’s no stranger to darkness, particularly when you look to films like Snow White and Pinocchio. When it came to balancing the light and dark within Peter Pan, P.J Hogan delivered. All great kids films have a little darkness mixed within them and arguably, these are the ones that remain with the viewer longer- for example, Wizard of OZ. Who could ever forget the first time they saw the Witch of the West cackling outside Dorothy’s window, swirling hysterically inside the tornado, or later on when those striped stocking-clad legs curled beneath the house? It’s not exactly light viewing, but it’s both beautiful and terrifying, and the same can be applied to Peter Pan.

Much like Wizard of OZ, the colours P.J Hogan implements are striking, the imagery used for both Neverland and Victorian London being very opulent, electrified with rich detail. For example, the ominous green used in the Black Castle sequence, amplifying the dark clammy shadows of this rotting fortress. In the iconic flight that transports the ‘Darling’ children from one universe to the next, sweeping amongst the stars and past Big Ben, we’re taken into a heightened world, inventively reflecting the extremities of a child’s imagination. Neverland functions as a living mood ring, receptive to Peter’s emotions; the plucky king of this mythical island that fuses together the worlds of its various fantastical residents. Shimmering fairy-tale forests atop with candy floss clouds are shown existing alongside black lagoons and gothic castles, inhabited by sinister sirens and blood thirsty pirates. It’s a place where wild imagination can reign, though as long as it can conjure such joy and beauty, it naturally can summon its most extreme antithesis. I think it was this intense contrast of paradise and danger that made this adaptation so exciting to watch as a young kid.

It utilises the darker thematic elements of the story to enhance both the more moving moments of the film, and also the most intense. The central conflict of the film is Peter’s fear of adulthood, this fear being manifested in the form of a malevolent, bitter Captain Hook (James Isaacs) who refuses to see Peter as a child, this making for some very frightening, violent confrontations onscreen. The sense of threat amplified in exciting albeit very tense sequences such as the brawl in the Black Castle and the climactic fight on the Jolly Roger exhibits this. For example, the latter depicts Hook taunting Peter over his loss of Wendy, ultimately due to her desire to grow up and leave Neverland. The landscape burns red and I remember not only the content of the scene but also the visuals truly unsettling me, this being the first time I’d seen Peter Pan portrayed so vulnerably. It really looked like Hook had won this time.

This vulnerability was furthered in the final scene, suffused by a very melancholic tone, something the Disney classic had chosen to omit. Peter’s famous motto, “To die, would be an awfully big adventure” is consequently flipped in the final scene after he watches Wendy, her brothers and his Lost Boys leave Never Land in favour of a family on Earth. He murmurs, watching on from outside the window, “To live, would be an awfully big adventure” which always seemed a very triumphant proclamation to me when I was little, but is tinged with sadness upon revisiting it. Perhaps he’s saying it to reassure himself, that immortality is the only way, but really he knows ‘to live’ forever but without others around him is his ultimate tragedy. Hence, P.J Hogan’s choice to take the darker elements of the story seriously pays off as the film moves beyond a mere kids fantasy epic to a beautiful ode to childhood and the inevitable letting go of it.

However, the darker tone also gave the film an edge that not only enhanced the danger and more moving moments, but also made for a grittier portrayal of these iconic characters. Peter and his Lost Boys looked like a gang of scruffy misfit kids and Tinker Bell (Ludivine Sagnier) could almost pass for a whimsical Ari Up (frontwoman of The Slits), infusing the film with acidic comedic stabs. The same applies to Hook’s crew, their appearance complying with a similar ethos that Pirates of the Caribbean director Gore Verbinski applied, “I didn’t want these pirates to be ‘hooks for hands, eye patches and trick-or-treat belts with striped shirts’ because really, they were rotting human beings, there was very little time to live… there’s a really fun, disgusting texture and quality to that”. The entire world thus felt rawer, more real and essentially more tangible, making the magic feel closer and even more spectacular. Finally, even better was that the girls had someone to relate to in Wendy. Even though this ‘mother’ role is pushed on her by the surrounding boys, the way she functions around this was inspiring to me as a young girl. She’s the best storyteller, enthralling all who listen, even the pirates at one point, not to mention she could swordfight as well as any of them; she was equal to and admired by fellow characters. There were also some very touching romantic moments between Peter and Wendy, the chemistry between the two young actors being genuinely sweet and believable. This is yet another example of how PJ Hogan unearthed the depth and warmth of J M Barrie’s writing, ‘You know that place between sleep and awake, that place where you still remember dreaming? That’s where I’ll always love you. That’s where I’ll be waiting’.

Ultimately, I’d have to disagree with the statement that there is ‘nothing magical in the atmosphere’ of this film. Mr French is very wrong. Complete with a sweeping, majestic score, swashbuckling adventure and stunning cinematography, Peter Pan should be hailed as a children’s classic. P.J Hogan lends a gritty reality to a world infused with simmering charm, the amalgamation of the two making for a truly beautiful, exciting film.

‘Waiting for the Barbarians’ Offers a Substandard View on Supremacy, Morality and Historical Injustice

‘Showgirls’ and the Panopticon of Patriarchy

Time is a Parked Car: on the Thanklessness of Memory, Guilt and Hope in ‘Stationary’, a Short Film