Looking for something to watch this Noir-vember but don’t know where to start? Fondly revered as one of the crowning jewels of 1940’s film noir, Double Indemnity is a sumptuous, stylised tale of murder most sweet. The film was directed by Billy Wilder in 1944, based on the 1943 novella by crime writer James M. Cain and interestingly co-written by Cain’s contemporary Raymond Chandler and Wilder. It follows the story of insurance salesman Walter Neff (Fred MacMurray) and the heavily orchestrated murder of Phyllis Dietrchison’s (Barbara Stanwyck) husband all in the name of love (and hefty insurance payout). We are first introduced to our protagonist Neff, slumped in an office chair, visibly strained, sweating and recording a confession into a voice recorder. Double Indemnity is narrated through the voice of Neff and closely unravels the murder plot in flashbacks.

Stanywyck’s femme fatale is one of noir cinema’s most celebrated characters – cold hearted, conniving and corrupt to the core. Neff first meets Dietrchison during a routine home sales visit. She greets Neff in a state of dishabille, dressed into nothing but a towel, a wig (more about that wig later) and ridiculously over the top feathered peep toe heels. She switches from hot to cold in a blink of an eye, flirting with Neff unashamedly in front of her house keeper. After the couples initial meeting, they meet once again to plot an apparent faultless plan to kill Dietrchison’s husband for money (and supposed undying love for one and other). Throughout the film cinematographer John F. Seitz brilliantly captured the tales desperation on screen. He was heavily inspired by early German expressionism and created a seedy, brooding world full of shadows and harsh lighting. The ‘venetian blind’ lighting technique – first pioneered by b-movie film makers in the 1930s and now an iconic trademark for film noir, was heavily featured throughout the film to great success. This production technique amplified the tension on screen and helped the viewers feel trapped, just like Walter Neff. During the pivotal scene in which the pair finalise their murder plans, the scenes are shot nearly entirely in darkness, emphasising the guilt and secrecy of the lovers dark pact. All throughout the film the tense atmosphere is tangible. With the desperation of Phyllis spiralling out of control towards the end of the film it begins to feel increasingly claustrophobic. Particles of aluminium were blown onto the set to create a hazy atmosphere and the production sets were purposefully ‘dirtied up’ to project the sleazy look of the film.

Dietrichson played a wicked game, choosing to project herself as a classy dame, a women of high morals but ultimately her flawed true self was revealed. The unravelling of the ruthless femme fatale is captivating. Stanywyck’s performance as Phyllis Dietrchison is magnetising. Extreme close ups on her face throughout the film charts the demise of a women destroyed by greed. The once flirtatious flicker in her eye morphed into icy, emotionless glare.

Double Indemnity features a lot of close up of the femme fatale, in particular Dietrchison’s legs and symbolic anklet. Close ups appear voyeuristic with intense focus spent following the character’s legs, anklet and ankle strapped pom pom heels. This fetishistic foot scene is mirrored again with dress shoes and anklet. Neff highlights that ‘honey of an anklet’ throughout the film. ID chains and personalised charm bracelets enjoyed popularity in the 1940s, similarly Dietrchison remarked that the anklet was stamped with her initials. Historically the anklet was gifted to a partner as a term of endearment or more often, a warning to wondering eyes that the wearer was taken. 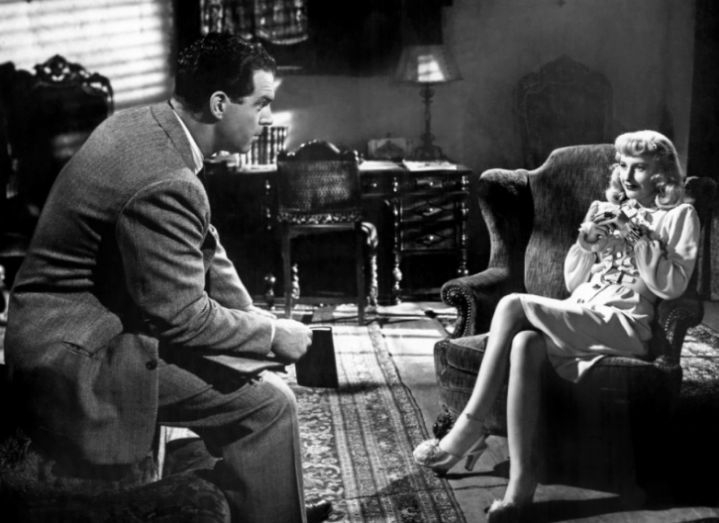 Costume and accessories are used throughout Double Indemnity to great effect with the character of Phyllis Dietrichson. Jewellery plays an important part in the visualisation of Phyllis’ delusions of grandeur and class. Throughout the film she wears a comically oversized ring, so gaudy and brash it screams fake. To accessorise two outfits worn in earlier scenes of seduction, she wears large geometric brooches, placed strategically at her chest. Her apparent servitude under her husband is visually reference in an overly large chain detailed bracelet that appears just like shackles around her dainty wrist.  These details paints the picture of Dietrchison as a caged bird, suppressed by a domineering husband and bored by her martial life. Once Mr. Dietrichson is no more the ornamental chains are no longer worn.

Even the wig worn by Stanywyck in the film is key in the character development. This wig gets a lot of flack in cinema history with a lot of negative remarks about the quality and authenticity of the wig, a previous Paramount employee even stating, ‘we hired Barbara Stanwyck and here we get George Washington’. Ouch. Billy Wilder is noted to have chosen the obviously low rent wig to emphasis the forced falseness of Phyllis Dietrchison. She was a low rent sort of dame who played men for sport. The brassy blonde wig was an extension of this persona.

Portraying herself both of devoted wife and free spirited lover, Phyllis struggles between the chic and outrageous when it comes to her wardrobe designed by the incomparable Edith Head. Stanwyck was playing a character who was playing a character in herself. Seemingly modest and basic, drab outfits such as a boxy suit, oversized waistcoat and full coverage sweaters did not scream femme fatale. But when Phyllis is going in for the kill she amplifies her sexuality with vampy ensembles such as the heavily fringed little black dress and voluminous satin jumpsuits mimicking risqué nightwear.

The turning point of the film lies in Neff’s discovery that Dietrchison, a former nurse, had something to do with her former husbands wife’s unusual death. This realisation alters Neff’s previously unwavering adoration for his lover and results ultimately in both parties demise.

Casci Ritchie is an independent dress historian specialising in fashion, film and consumer cultures. Her true great loves – film and fashion – began when she watched her first film noir, The Big Sleep, as a teenager and fell in love Bacall and Bogie hook line and sinker. Some of her favourite films include Whatever Happened to Baby Jane, Beetlejuice, Double Indemnity and Cry Baby. You can find her over on Twitter at @CasciTRitchie & her blog www.casciritchie.com.

Patrick Wilson Wants to Be Your Daddy: Discussing Faith, Gender, and ‘The Conjuring’ Series

Slim on Scares and Heavy with Unclear Exposition, ‘The Conjuring: The Devil Made Me Do It’ Works Best When It Gives Its Leads Room to Shine