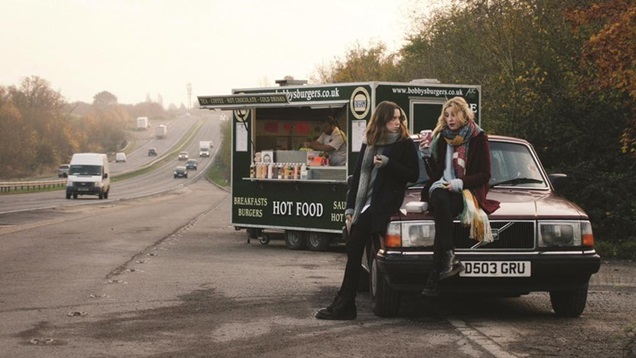 What springs to mind when thinking of a road-trip movie? Wide open roads, blue skies, and the wind in your hair? This is not the case with Burn Burn Burn. Instead, you have muddy fields, grey clouds, and a friend’s ashes in a tupperware container on the dashboard.

Chanya Button’s Burn, Burn, Burn is a heartfelt road-trip film with a difference. Friends Seph (Laura Carmichael) and Alex (Chloe Perrie) embark on a quirky journey of self-discovery that brings a whole new dynamic to what could have been a clichéd story. The feel-good format is hijacked by Button to deliver a look at the grieving process in a new way.

After they lose their friend Dan (Jack Farthing) to cancer, Seph and Alex find out they are included in his will. Dan has left them his ashes and numerous videos instructing the pair of the specific locations across Britain he wants his ashes scattered.

This time on the road allows both Seph and Alex to find out more about themselves, each-other, and even Dan. Button allows her characters to grieve and process their loss, but as they are trapped together in the car, scenes packed full of emotion naturally arise. The pair deliver strong performances that are sharp and witty as they depict a complicated yet strong friendship. Seph and Alex’s close relationship is realistic with their small tifs but constant love for each-other: Seph supports Alex as she is not out as a lesbian to everyone yet and Alex is there for Seph when she has relationship struggles. Dan’s wish unites their focus and provides meaning to their trip.

Sometimes jarring in tone, Burn Burn Burn shifts between comedy and sincerity. However, it is really the chemistry between Seph and Alex that drives the film. Beside their relationship, Button also provides an interesting presentation of Dan, ensuring he is more than just a two-dimensional plot device through the screen.

Dan’s diagnosis is 1 in 800,000; something which he declares makes him very special. This element of dark comedy seems to be the writing style of Charlie Covell, who has gone on to write The End of the F***ing World, a show that also embodies a similarly morbid humour. Covell excels at tying moments of truthfulness with ridiculousness. She presents an existential narrative with the film’s lingering consideration of death beside scenes that are naturally funny.

This comedic element offers an exploration of the dark topics, exemplified in Alex’s personal confession scene. “I can’t deal with people!” Alex finally lets out as she reaches her breaking point, Button and Covell are not afraid to delve into this dark revelation. Alex gets herself into a situation where she is roped into playing the crucified Christ. This scene plays out with Alex’s arms spread wide as she confesses on the cross, finally telling Seph her secret. On paper, this scene of Alex’s divulgence sounds absurd. Yet the moment manages to bare a raw, unexpected honesty that finds an unforced situational humour alongside its existentialism.

In Dan’s own words: “essentially this is Thelma and Louise plus Caspar the friendly ghost.” While Burn, Burn, Burn may not be a perfect road-trip movie, it does achieve a dry humour that is well executed with its lead women. Button and Covell’s pairing results in a narrative where this female friendship is the fuel of the movie.

Originally from the flat lands of Norfolk, Emily now studies Film at De Montfort University. She’s often found cuddling her dog and wearing oversized jumpers with a big mug of tea. When Em’s not in the cinema, she spends too much time re-watching Bo Burnham’s stand-up comedy and subjecting her friends to her Call Me By Your Name ramblings. You can follow her on Twitter: @EmMaskell

Putting Baby in a Corner: Female Solidarity in Abortion Films

‘Arkansas’ is Not so Much a ‘Southern-Fried’ Crime Thriller, More of a Soggy Mess

“You understand television and real life are different, right?” : ‘Community’, Abed, and Meta-Fiction

Actor and Filmmaker Elle-Máijá Tailfeathers, on Being an Indigenous Woman in the Film Industry and ‘Blood Quantum’