REVIEW – Write When You Get Work: Solid lead performances can’t save this stunted character study 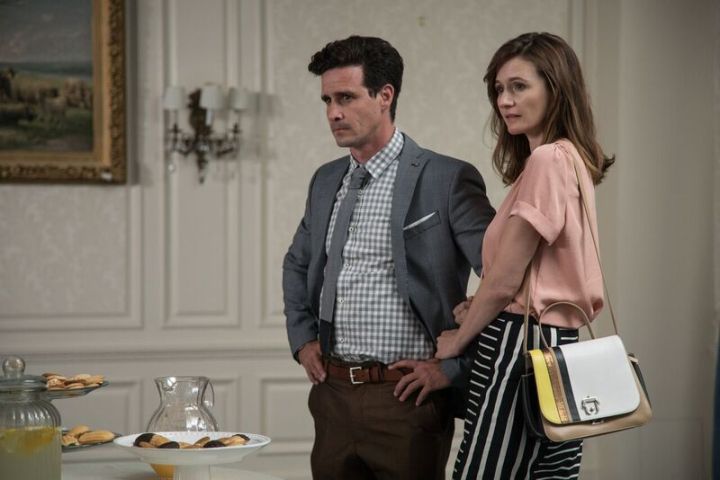 “I’m not drunk, if that’s what you think. I’m struggling.” Except, the thing is, she’s not really. Nan Noble has always been fine – more than fine. She blithers away atop her Manhattan condominium, comfortably nestled amongst a heap of cash and expensive jewelry strewn about, supported by a Wall Streeter-esque husband (covered in tattoos?), caring for their two young children who have names akin to posh Dickensian progenies. Is it supposed to be dramatic irony that we, the audience, are to understand that Nan’s struggles are almost entirely superficial, and that there’s not any real sympathy to be drawn from her entitled, aristocratic whimperings? Or are we assumed to find some sense of empathy within us for a woman who believes her children are going to be metaphorically “killed off” by being pushed out of their elitist all-girl’s school in favor of newcomers with less-than? Well, that’s the other thing with Write When You Get Work – it’s hard to really say.

The first feature from writer-director Stacy Cochran in eighteen years (whose filmography includes titles such as Boys starring Winona Ryder, and My New Gun led by Diane Lane) is an unstable endeavor at best. At worst, it is a film led by competent, talented actors navigating through a thematically tangled script that does not know what to do with them, and depicts their underwritten personas as either painfully unlikeable, or utterly understated. It is a film with certainly something it wants to say, but no articulate or tasteful means of getting it across to an audience. Thus, the end product is a mish-mash of occasionally clever dialogue, delivered by characters we never really know, defined by halfhearted personalities we don’t like. They swim through a story that can’t find its own sense of purpose no matter how hard the lovebirds kiss or how many cigarettes they smoke, or the artful way they gaze out onto open water while swathed in a blanket of blue light. The takeaway from Write When You Get Work is of a murky mass dusted about with attributes which, in a different script, would yield a solid effort – here, they just get lost in a fog.

Rachel Keller, Emily Mortimer, and Finn Wittrock (though wildly miscast), carry the film on their shuddering shoulders. Mortimer’s Nan Noble, the unsympathetic patsy in a scheme that goes awry, is easily the best part of the film, despite her character being a snob in the shrillest sense. Wittrock’s Jonny, the delinquent bad boy with a “Hey, I’m walkin’ here!” accent, is introduced to the film by being sweet to his lady, then rushing off to play an honest game of American baseball. The eventual reveal of his criminal tendencies is played off as common knowledge, but comes as a total surprise due to the way he’s initially portrayed – and it’s all just so unconvincing. It would be more fitting if Jonny was depicted as the sociopath his character really is (stalker, misogynist, emotionally manipulative), the sociopath we all know Finn Wittrock was born to play for the rest of his natural life; trying to persuade us that he’s a cool boy New Yorker with a heart of gold just doesn’t seem to translate (also, where the hell does he live!?).

Then there’s Rachel Keller’s Ruth, who it feels was allowed to speak for only five times in the film, and never really said much of anything anyway. She’s defined only by a tough choice she made for herself nine years prior, which ends up coming off as belittling, and by her desire to leave Jonny and her criminal (really?) past behind in favor of her new persona as a private school admissions officer. Keller can play the good girl with bad inclinations to an absolute T (check out her shining work in both FX’s Fargo and Legion), but never gets the opportunity to show it off here. That’s because the main problem that these three characters share in common is the fact that they are characterized as being one thing, but come off to the audience as another. It’s to their credit and their talent that they manage to do their best with the given material (though it is all too apparent that Keller is restrained), but they are further brought down by a smattering of shaky secondaries that make the film feel too evidently supported by only three seasoned actors.

The biggest hindrance to the film by far is its story progression, colored by coincidences that aren’t believable, brought about by actions with motivations that are either unclear, or don’t exist at all. Characters come together and events come about by circumstances that just don’t make any sense, and the fact that they have no palpable uniting theme just muddles things even further. In the end, it does not feel like any of the characters really grew or learned a transformative lesson – quite the contrary, some of them feel as though they’ve regressed. Write When You Get Work is certainly a film about something, though, whatever that might be gets lost in a haze of underdeveloped relationships and vague plot points.

Ultimately, there is very little writing involved with any of these characters getting work – but there should have been some more in the creation of this script.

Write When You Get Work opens in NYC on November 23rd.

‘The Ringmaster’ is a Quirky Documentary About Following Your Dreams

[The Final Girls Club] The Madonna and the Whore in Hell: Exploring the Duality of Women in ‘Hellraiser’