LFF REVIEW- Roma: The story of a little house in the city 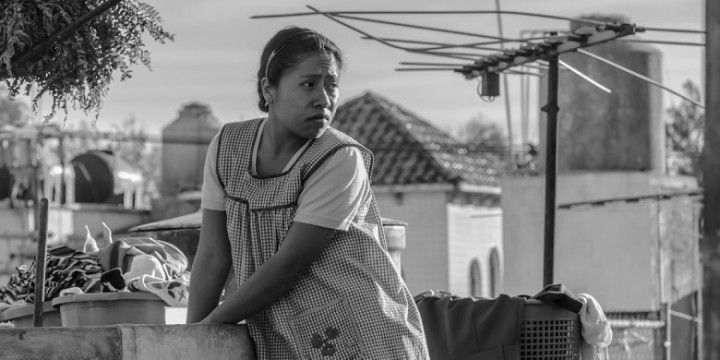 Coming back to solid ground after the acclaimed Gravity and looking back on his roots, Alfonso Cuarón takes a path through childhood and his own memories to craft and deliver the elegant and incisive Roma, an incredibly lyrical piece of life. It finds beauty in the little things about a 70s existence in Mexico City – a floor being swept several times, a plane shooting through the sky, a rooftop to hang up clothes – and pushes them in the foreground.

The director of Y Tu Mamá También multi-tasked as he not only directed but wrote, produced and edited Roma, the most personal film of his career to date. For a while, we follow Cleo, a domestic servant for a doctor, his wife and children. But the film is more than the portrait of her specific character. It is an epic and raw moment of life drawn from an eclectic past. The audience stands in a corner and observes as Roma blends together historical facts – such as the 1968 student strikes and massacre – and ordinary life.

Yalitza Aparicio plays Cleo, in whom Roma finds its cornerstone. With her friend Adela (Nancy García), she shares a room in the maids quarter. Both of them are pivotal points, running the household whilst having a social life out of Señor Antonio (Fernando Grediaga) and Señora Sofía (Marina de Tavira)’s home. They strolls in the city streets, have boyfriends, go to cinemas and restaurants but always return to their obligations. Cleo is loved by the children and they tell her so. She tenderly reciprocates. The intimacy developed between them is essential to a story reminding Cuarón of his own boyhood mainly ruled by women. There is a majesty in the way Aparicio’s Cleo moves into time and space. She is the tone down element of a raging entourage yet radiates with delicacy and love. Yalitza Aparicio makes her debut in acting but provides a terrific performance for a newcomer as she pulls every strings with a startling and delightful easiness. In a contemplative scene, her talent blossoms when Cleo and the younger son Pepe (Cuarón’s fictional twin) lie down at the top of a building, silence enveloping them. In another frame, she stares out of the window of a car but we can read her face like an open book. There is no need for words and never-ending conversations when only the atmosphere Aparicio creates brings tears to the eyes.

The film is also a technical dream as Cuarón uses not only gorgeous black and whites but a whole range of panoramic shots to give back its flashy and lively shades to Mexico City. The camera wanders from room to room and places to places, seeking for Cleo’s movements, taking its time, but in the ends, it never leaves us apathetic, quite the contrary.

Roma’s brilliant statement relies in the way it is in no hurry to unfold some form of plot. It is a simple yet splendid instant snatched from the past which plasters the screen with every single one of its details. But when the hurricane comes knocking at the door and the wind blasts through, it does not leave any survivors. When without any warning, the film reaches a tempestuous stage, every emotions are brought to shore and Cleo is the first casualty.

Roma is, in truth, nothing but the story of a house, seeing adults, children, dogs, cars come in and out of its walls and unveiling their storyline as intertwined threads in a ball of wool. This house is a comfortable one, filled with bookcases, enormous rooms, dainty couches, the perfect model of bourgeoisie. It contains lights, life and a Ford Galaxy metaphorically way too large for its alley. And a relaxing routine settles in. You’ll spend so much time pacing up and down its staircases and corridors that by the time the film ends, this house will feel like your own. And your heart will ache for it when the house’s rotten foundations start to crumble to the ground with everything it holds dear in it.

‘Leonardo’ Portrays a Genius Forged by Pain and Passion