REVIEW- The Hate U Give: a relevant YA drama tackling trauma and speaking truth to power 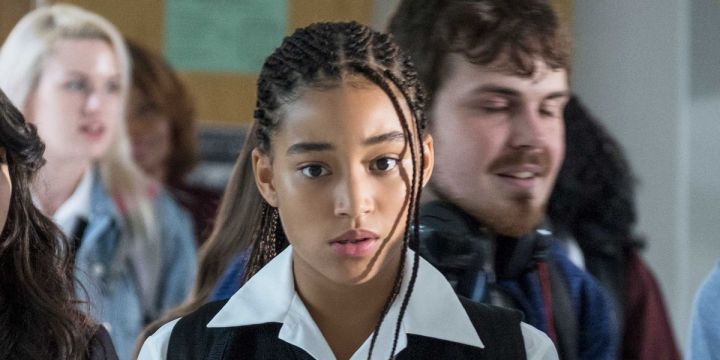 The Hate U Give is based on a book of the same name, which in turn found inspiration for it’s title in Tupac’s acronym for THUG LIFE: The Hate You Give Little Infants Fucks Everbody. At its most conceptual level the quote perfectly captures what the movie is about: how the energy you put in the world has a way of coming back around.

Centering on the life of 16-year-old Starr Carter (Amandla Stenberg), the movie looks at youth through the especially relevant lenses of violence and political engagement. A central tension of the movie is Starr’s double life. By day, she attends an elite private school where she is one of the few black students in an otherwise white, upperclass student body. At night, however, she returns to her lower-class, predominantly black neighborhood of Garden Heights, that is also home to a gang called The King Lords. Despite her fractured worlds, Starr’s life is pretty good. She has a loving family and a cute boyfriend. She goes to parties and plays on her school’s basketball team. But the order of Starr’s life gets turned around when one night she reunites with her childhood friend Kahlil, rekindling their romantic chemistry. Later that evening, sitting in Kahlil’s car, they get pulled over by a suspicious cop who asks Kahlil to step out of the car. Believing he’s armed, the cop shoots Khalil, killing him.  Although Khalil’s murder is the key event that sets the movie’s plot in motion, The Hate U Give examines police brutality in a personal framework as well as a political one. At the heart of the story is how those traumatic events teach Starr the power of raising her voice and bring her worlds together in such a way that it is no longer possible to code switch between them.

The movie does an excellent job of expressing the polarity of Starr’s two worlds visually and particularly uses color to show Starr’s emotional relationship to them. For instance, shots featuring Garden Heights are often drenched in warm colors and sepia tones, indicating a sense of comfort and life that persists throughout the community in spite of the King Lord’s violence. Starr’s high school, on the other hand, has an austere white and blue color scheme that is also reflected in the coloring of the police station, connecting the spaces. Narratively the connection is reinforced in the parallel parallel between the ignorance of the white cop who shot Kahlil and that of Starr’s white classmates who protest Kahlil’s shooting as means to get out of math class. The police station and the school are spaces where white supremacy holds particular sway, and, in that sense, both perpetuate an obvious lack humanity and reproduction of oppression.

Of all the powerful imagery in The Hate U Give, the warmth portrayed in the Garden Heights’ community and in Starr’s household is perhaps the most quietly subversive. As a white woman, I admittedly don’t have extensive knowledge of African-American centered media, but the black nuclear families I’ve been exposed to consist of The Prouds in The Proud Family, The Johnsons in Blackish, and the Baxters in That’s So Raven, all of whom are upper-middle class. Starr Carter’s family doesn’t share the optics of respectability that these other portrayals do. In addition to being lower class, Starr’s father was at one point, a member of the King Lords gang, which, after a stint in jail, he eventually left to open his own grocery store. But though his history would have us associate him with the stereotype of the threatening thug, the movie is adamant that while they might not have the optics of a conventional nuclear family, the love that exists between the Carters is the same. They share jokes over a meal at a diner and Starr’s parents profess, with sometimes embarrassing gushiness, how much they still love one another. This familial warmth and the emphasis on Garden Heights’ sense of community challenges the overly simplified idea of black neighborhoods as ghettos of violence, tragedy and despair.

With a movie that’s so obviously political as The Hate U Give, it’s easy to see the ending as a referendum on the state of the world and solvability of the problem at hand. As the aftershocks of Kahlil’s death shaped the course of the movie, I found myself fearing the path that the movie would take. I wanted to see Kahlil’s killer convicted, but simultaneously knew that such an ending would also feel too rosy and simple. The alternative, on the other hand, would unfortunately feel more realistic but also soul-crushing in its implications. Overall, however, I was pleasantly surprised. Without giving anything away, the ending satisfied Starr’s emotional arc without negating how fraught with corruption and complexity the US Justice System actually is.

Sophie is a college student studying English and American Studies. She likes to creative writing as a form of self-expression and procrastination. Her other interests include music, playing guitar badly, and enjoying the great outdoors from the even greater indoors. You can follow her at @filossofee and find links to more of her work here.