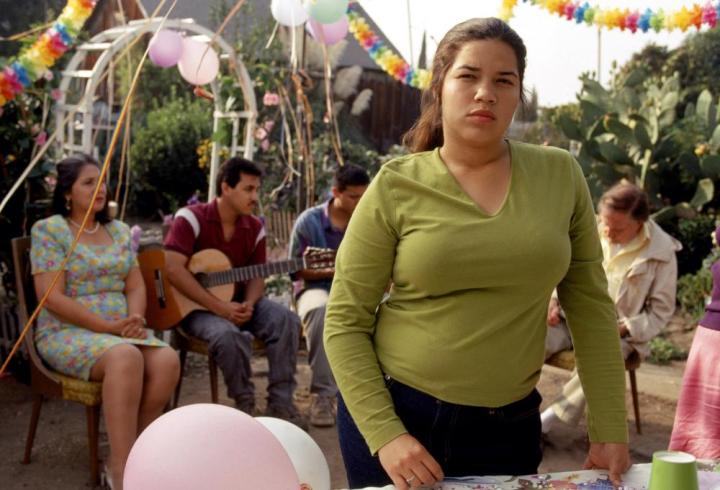 For myself and many others, the coming-of-age genre is a favorite because of the warm, fuzzy feeling that accompanies nostalgia for youthful innocence without reliving the stress of those formative years. Last year’s Ladybird was a welcomed addition to my favorite genre. Written and directed by Greta Gerwig, the film was a standout during awards season garnering several Academy Award nominations including Best Director, making Gerwig the fifth woman to ever be nominated in the category. Despite not winning, the accolades Ladybird received brought success to Gerwig and for women’s storytelling in general. Following the buzz, I was super excited to watch it, but as the film began I struggled to connect with it the way that others had. Full disclosure: I am a 20-year-old Latina woman in my senior year of college. The opening argument in the car between Ladybird and her mom made me feel uncomfortable. It brought me back to seventh grade and the first time I rode in the backseat of my white friend’s car as she and her mom fought to see who could scream the loudest. The whole film does not feel this way though, and eventually it became one of my favorites. I thought this was the definitive representation of what being 18-years-old felt like, until I watched Real Women Have Curves and finally saw myself in a way I didn’t even know that I wanted.

Real Women Have Curves is a 2002 film directed by Patricia Cardoso, based on the play of the same name by Josefina López. The film stars America Ferrera as 18-year-old Ana Garcia, a Mexican-American girl living with her extended family in East Los Angeles. Ana is a headstrong girl from a lower tax bracket than her peers who dreams of moving out of California to New York for college but her family, especially her tenuous relationship with her mother, fight to make her stay. Sound familiar? It’s Ana’s last day of high school and as her classmates share their impressive future plans, Ana struggles to come up with her own plans. When her teacher, Mr. Guzman (George Lopez), presses her on her status in the application process, Ana brushes it off saying she won’t be going to college because her family can’t afford it. Ana’s mother, Carmen (Lupe Ontiveros), stresses that Ana is needed at home to support the family so she has to put off college. Ana is very aware of her situation; it is a common one of first-generation Latino-Americans. Ana wants to go to Columbia University but feels immense guilt leaving her family. Family is clearly very important to Ana, especially her close relationship with her grandfather, though that does not make her any less of a teenager. She still fights with her mother but never crosses the boundary of respect that is a large part of the culture. The moments where Ana and Carmen butt heads is never caused by malice. Carmen does not intend to hurt Ana, nor does Ana ever attack her mother’s traditional views. They are coming from different mindsets trying and failing to connect with each other.

My favorite thing about Ana’s characterization is that she’s allowed to be herself. Media representation for Latinas is often over sexualized and played up to be fiery and feisty (Sofia Vergara’s character on Modern Family being the classic example). Growing up as a timid and quiet Latina made me feel out a place in my own skin. People still feel like they can use words like “exotic” to describe me. Real Women Have Curves has a scene where four Latina women strip down to their underwear without ever falling into these tropes. Ana is intelligent and self-assured but also stubborn and awkward —she’s a complex Latina character that unfortunately we don’t get to see very often.

A history of machismo and other cultural coping mechanisms has made talking about emotions in Latino families difficult. When Ana burns herself on the steamer, her mother rushes to sing the pain away: “sana sana colita de rana” a song my mother (who happens to share her name with Ana’s mother) used to perform on me. “Si no sana hoy, sanará mañana”: if it doesn’t heal today, it will heal tomorrow. A nonverbal “I love you” from a woman who’s tough as nails, promising to take care of you today and tomorrow. Seeing this moment between Ana and her own mother made me feel comforted; I never imagined the weight seeing my personal rituals being performed on screen could hold.

When almost pushed to heat exhaustion, Ana encourages the other women in the factory to strip down to their under garments. They complain about their weight and compare their bodies—pointing out stretch marks and cellulite—but it’s done with love, “look, how beautiful we are!”. Throughout the film, Ana endures persistent criticism from her mother about her weight. Ana is clearly bothered by these comments but she maintains her security in her sense of self. As someone whose body resembles Ferrera’s, I felt powerful seeing Ana have so much pride in her body. Seeing her embrace herself and be validated by other women is a kind of reassurance I’ve never felt from a film before.

In 2002 we caught a glimpse of what a future with an inclusive film industry would look like. But that was fifteen years ago, and people of color still have to fight to prove their stories are worth being told. Real Women Have Curves made me feel seen in a way that was honest and moving; like I didn’t notice I’ve been holding my breath my entire life and finally I can breathe. It’s a sobering reminder of the importance of representation when you spend so many years starving for it without even realizing. As we make strides forward in rallying for stories told and directed by women, we must remember to keep women of color a part of the discussion.

Thalia is currently a student at Rutgers University, trying to find a way to combine her interests in science and art. A true 90’s baby, you can find her at any given moment rewatching the entirety of Rugrats. Some of her interests include painting, animation, watching video essays on Youtube and making lists. Here’s a list of some of her favorite films: Inside Out, Ladybird, The Nice Guys, No Country for Old Men, Real Women Have Curves and Beauty and the Beast. Twitter: @thalcastro