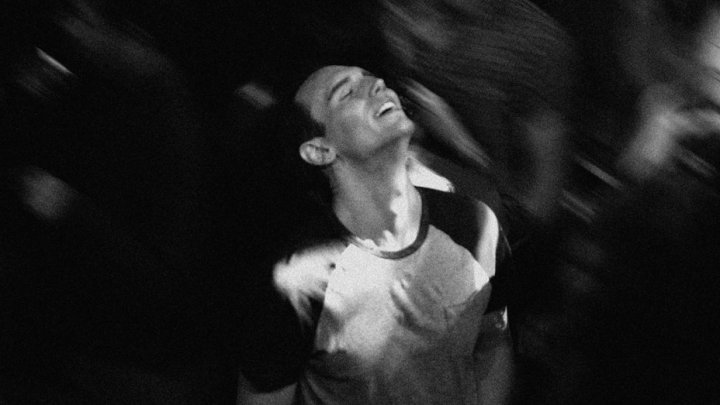 Unspoken words and expressive eyes. This is how Yen Tan’s 1985 could be described, a heartrending yet forthright and honest cinematic masterpiece in which faces wrapped in a grainy black-and-white atmosphere of poignant melancholy, convey more emotions and truth than any piece of dialogue ever could, thus inevitably going straight to the audience’s heart.

The film tells the story of a young closeted man named Adrian (played superbly by the astonishing Cory Michael Smith), who flies back home from New York City to Texas for the first time in three years, bringing along his tragedy: he was tested positive for HIV/AIDS and is aware that his life is rapidly ebbing away. Adrian struggles to reconnect with a very religious and conservative family he clearly feels awkward around. Dale, his father (Michael Chiklis) greets him coldly at baggage claim and his teenage brother Andrew (Aidan Langford) barely pays him any attention at first. Adrian’s mother (Virginia Madsen) seems to be the only one genuinely happy to have him back, but unconsciously pressures him into patching things up with childhood best friend Carly (Jamie Chung).

Yen Tan’s brio resides in how neatly he succeeds in portraying deep sadness and despair without having to exacerbate his characters’ emotions through words. Very simple close-ups on the protagonists’ faces partly in light and shadows, are enough to impart their deep-down anxiety and uneasiness. At the margin of his own family circle, Adrian is a façade, an impervious bubble of muted and simmering feelings that can’t be burst, keeping turmoils and distress within, no doubt out of modesty and fear. So he just keeps quiet (until he can’t physically hold it in anymore). His only true way to communicate is through cassette tapes, which create a path towards reconciliation with Andrew thanks to their shared musical tastes, but also symbolise his testimony and to some extent, his will.

1985 (co-written with cinematographer HutcH) may be in black-and-white, but the secondary characters are far from strictly belonging to one side or the other of this monochrome world. Quite the contrary. Instead, they shine in a colour palette by the complexity of their personality, somehow giving back to the film the brightness missing. Adrian’s mother is not so oblivious, his brother is not so unforgiving and his long life friend Carly proves him wrong on the strength of their friendship bond, overcoming rejection and still demonstrating unconditional love. But above all, Adrian’s father is not so heartless.

Even though parents and especially father figures appear most of the time like a threat, an obstacle, forever misunderstanding their child in queer movies, Dale seeks to be a counter-example. Hiding his true colours, he too, despite the film being set in the unaccepting 80s, tiptoes in the footsteps of new supportive parents, and aims to get closer to characters such as Mr Perlman in Call Me By Your Name or Mr Spier in Love, Simon. While it is true that Dale isn’t completely stripped of stereotypes — he is wide-shouldered and his authority weighs heavily on the household — Yen Tan’s approach to his character tricks us all into thinking this man is just another classic bullying parent, so often framed in cinema. Past the surface and underneath a misleadingly opaque veil of callousness, Dale intensely care and has his heart set on understanding who his children really are, as he’s afraid of loosing them, a nice and warm surprise that allows to reshuffle the cards of the family dynamic.

‘‘I just wanted to see you one last time’’ screams Adrian’s defeated smile, facing his friend Carly around a drink. With a high level of sensibility and humanity delivered by Smith’s performance, Adrian ticks the boxes of his existence in a very The Bucket List-y narrative, battling his inner wish to come out but giving priority to the people he knows will hurt after he passes away. In that sense, 1985 is a finely nuanced celebration of unconditional love and an homage to a man, mirror of an entire generation, trying to write the last few pages of his life before closing the diary for good.

1985 was awarded the Student Jury Prize and the Audience Award at the 2018 Champs-Elysées Film Festival.

‘Schemers’ is a Rock and Roll Autobiography With No Introspection

Anthony Mackie and Jamie Dornan Charm in ‘Synchronic’, a Sci-fi that Buckles Under the Weight of Big Concepts

‘His Dark Materials’ Season 2 Strains Under the Weight of its Exposition, but Flourishes in its Performances

Why ‘Avatar: The Last Airbender’ is a Children’s Show With Ageless Appeal