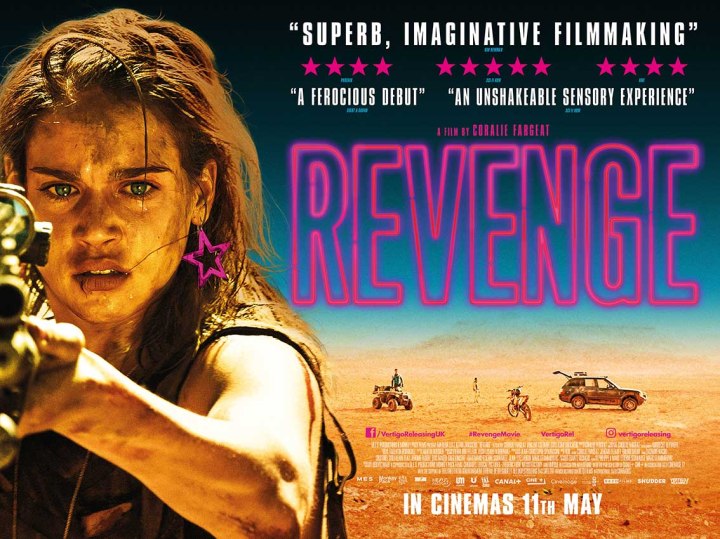 Birds’ Eye View is an organisation that promotes the work of women film-makers and addresses gender inequality in the film industry. This year, they have launched ‘Reclaim the Frame’, a four-part film screening series across 5 cities and 6 cinemas in the UK that is pushing to promote new works by women filmmakers.

Coralie Fargeat’s ‘Revenge‘ is the first film on the bill. Described as ‘An overwhelming and unshakeable sensory experience‘ by SciFi Now, the story focuses on Jen, a young lolita-esque character who goes away for a romantic weekend away to the desert with her millionaire boyfriend. Things take a turn for the worse however when her boyfriend’s hunting friends show up and make advances on Jen. The events accumulate when Jen is left for dead, eventually dragging herself back up with revenge on her mind. What follows is a bloody and violent trail of redemption and transformation, described by The Hollywood Reporter as “a rape retaliation thriller both tautly controlled and wildly over-the-top, executed with flashy style, sly visual humor and a subversive feminist sensibility.”

Classically the rape-revenge sub-genre is portrayed and dictate by the male gaze. Revenge however, aims to subvert the common tropes and potential miscommunications of its back catalogue by opening the doors to a woman’s perspective. Fargeat was aware of this while writing and filming, expressing that the rape trigger “was a symbolic way of encompassing the violence and inequality that women suffer” and she addresses the idea of sex appeal and seduction within the genre and the rape culture we live in, “I wanted a character that could be as superficial, seductive, and sexy as she wanted to be, and that never being an excuse for anyone to harm her. That’s a real
problem: women are made responsible for what others do to them, even though they are the victims.”

Revenge is sure to raise some important discussion points about the rape-revenge genre, the female gaze, feminism and exploitation and luckily enough each Reclaim the Frame screening will play host to a post-screening discussion that integrates the audience with special guest speakers. The upcoming screenings are as follows and you can buy tickets on each link:

Join the conversation with the hashtag #RevengeMovie and follow director @coraliefargeat and lead actress @matildalutz.

Keep up with future Reclaim the Frame screenings by following @birdseyeviewff, #ReclaimTheFrame and subscribing to their mailing list.