Frances Ha and the displacement of the male romantic lead 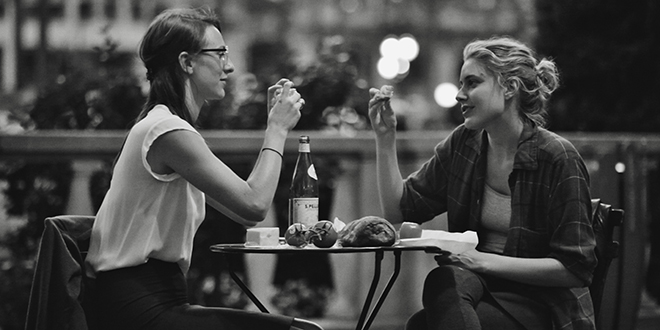 A theme in Frances Ha (Noah Baumbach, 2012) as noted by most viewers, is the affirmation of the ‘female friendship.’ It is presented on screen in a way that is not often shown. The closeness, complexities and necessity of two women in platonic love is demonstrated in its short 86 minutes. Sisterhood in women, regardless of activism, is a tangible aspect of society. That is not to say all female friendships are deep, intense and meaningful but that often the way they are experienced in life is not the way they are represented in film. The trope of the ‘bitchy’ friend or the transgressive ‘not like other girls’ girl, portray a much more antagonistic domain that perhaps is true. Friendships generally act as the secondary plot for films aimed at women. For example, in Bridget Jones her female friends are minimised to the one that cries and the one that says ‘fuck.’ But, both talk to Bridget about her romantic aims. The friend is used as mirror image to reflect back plot points to move the inevitable romantic relationship forward. This is not the case in Frances Ha.

Frances Ha displaces the romantic plot for a platonic one. The eponymous Frances (Greta Gerwig) and her best friend Sophie (Mickey Sumner) don’t have a perfect relationship. Their friendship is flawed, complex but has its foundations in love. Frances doesn’t understand Sophie’s need to settle whilst Sophie views Frances as a perpetual child. Frances might say they are same but with different hair but this is a case of opposites attract. Interestingly, the trajectory of the film follows the same as any heterosexual romantic genre. The intimacy is established immediately. When Frances meets Sophie after work (with the usual call of “Ahoy sexy”) the film develops a contrast in their characterisation with the more straight laced Sophie in comparison to the more chaotic Frances. It also alludes to an underlying romance when sweeping violins play over their dinner. This idyllic scene quickly deteriorates as it is followed by Sophie’s admission she wants to move to a more expensive part of New York. Frances can’t follow her and so starts the major conflict of the film – the separation of the two friends. The rest of the film is Frances coming to terms with life without Sophie. The friendship break-up is felt so much more profoundly than the relationship she ended at the beginning of the film. This initial break-up affected Frances so little, that the audience forgets the boyfriend too.

It is the leading man’s absence that makes it all the more poignant. In a recreation of a scene in Leos Carax’s Bad Blood, Frances runs through the streets of New York to the sound of David Bowie’s Modern Love. She runs, uninhibited, away from ‘modern love’ and its conventions. Frances is anything but conventional in the filmic world but a recognisable figure in the real world. She is deemed “undateable” by herself and her flatmate Benji (Michael Zegen). This turns into somewhat of an insult rather than the joke it is intended as. The point lost on Benji is the core relationship in Frances’s life is with Sophie. The sense of a ‘classic love story’ is enhanced by the crisp black and white cinematography. A timeless quality is given to Frances’ ambling navigation of young adulthood.  On the other hand, a de-romanticization is seen in other aspects of the plot. Frances’s journey to Paris is a complete failure and we as the audience feel her disappointment acutely. It subverts the illusion that ‘you can find yourself.’ Frances’s loneliness follows her wherever she goes. Indeed, that it a part of life in your twenties. It can feel aimless. This is also reflected in how Frances’s dreams are not realised by the end of the film. She compromises. She takes on an office job at the dance school whilst choreographing on the side rather than as the professional dancer she envisioned herself as.

Frances is living in the liminal space between university and adulthood. You are no longer protected by the education system but you are yet to learn how to navigate the practical worries of adult life. In a sense, it’s the end of the party. Frances and Sophie represent two responses to this seemingly inevitable path. Frances wants to relive her youth, going as far as taking a job at her university, whilst Sophie gets engaged and is ready to settle down. It is important to rewrite these female orientated narratives on relationships and fulfilment. As such, Frances Ha ends with some resolution, a muted happy ending, one that exists without the prospect of a romantic relationship but instead, a renewed friendship. Sophie is present and sees the semi success Frances has achieved. There is no cathartic crying, embrace nor argument but Sophie’s presence is present enough. It is in this relationship the film pins its enduring message. Friendship is more important than romance.

Categories: Anything and Everything, Feminist Criticism

Alien-Parasite Flick ‘Black Friday’ Offers Up Some Fun, But Doesn’t Fully Deliver on the Deals