REVIEW- You Were Never Really Here: Ramsay’s gripping and all consuming character study see’s Joaquin Phoenix at a career high 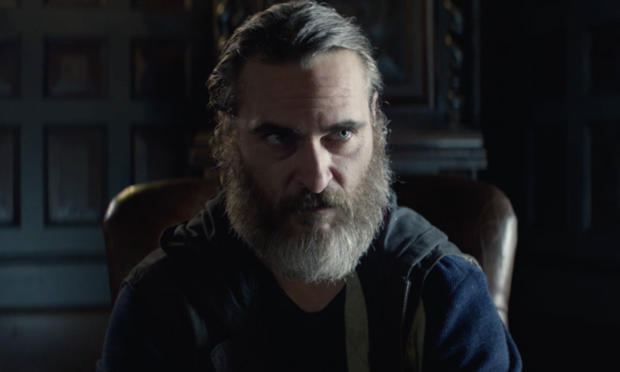 Based on Jonathan Ames’ 2013 novella of the same name, Lynne Ramsay’s fourth feature, You Were Never Really Here, is a gripping and intense sensory overload. Joaquin Phoenix, on top form, plays Joe, a former soldier who now carries out hitman-like retrieval jobs of missing and runaway kids, providing much more discretion and opportunity for revenge to the wealthy people who hire him.

Ramsey’s screenplay focuses strongly on precision and absolute necessity. Unlike other on-the-surface hitman action thrillers, she makes a bold and original choice in the script with an almost complete lack of exposition. The audience only knows as much as Joe does, there is no dramatic irony in that we don’t have scenes alone with his ‘enemies’ to hear about their plans. We are with Joe every second and are as alienated and confused as he is, during the happenings of the succinct eighty-five minutes the film spans.

Ramsay is highly observational in her direction, picking out key details in the life of our protagonist to tell us about his relationships or lack thereof. Especially so with his mother, Ramsay paints a picture of a quiet but close bond between mother and son, interspersed with flashing harsh cuts to a childhood of household abuse and a myriad of attempts at self-asphyxiation, which has progressed well into Joe’s adult life. His PTSD and suicidal tendencies are addressed immediately, but never vocally. Joe simply does not want to be here anymore.

What is so striking about You Were Never Really Here is that everything other than Joe is simply white noise. Secondary characters and somewhat typical plot devices are hardly recognised within his and the audience’s isolated headspace. Phoenix is utterly magnetic as a powerfully built scar-ridden man; his eyes alone speak volumes of a violent past. He somehow finds a stunning balance between gentle giant and brutal killer, rendering him our vulnerable yet relentlessly violent anti-hero. He is a good man with bad ways.

Johnny Greenwood’s pulsing and disjointed score seldom gives us a moment of softness before we are thrown back into the torment and violence of Joe’s own psyche. The use of sounds envelops the audience as much as it does our protagonist, with the conversations of those around him building up to excruciating torment and paranoia.

Lynne Ramsey has arrived back on our screens with a lean-cut, all-consuming character study that raises only questions and never answers; can we outlive our trauma or must we face it?