In compiling my list of top ten films this year, I stumbled upon at least a couple realizations. First, I think I’m falling a little bit in love with Mike White. He wrote the screenplay for my favorite film this year (this is me working to build some amount of anticipation in you, dear reader) and ALSO co-wrote another 2017 release I’m positively desperate to see, The Emoji Movie (so hey, now you can narrow my top pick down by at least one, right?). Second, production company Killer Films continues to impress me with their output, with not just one but two films making my top ten. (You can read more about Killer Films founder Christine Vachon here)

Lastly, if there’s one theme reflected brightest in my favorite movies this year, it’s women taking justice into their own hands, no matter the cost of the struggle (and for some, it’s all too high). 2017 was a big year for women in film–I sincerely hope 2018 takes whatever progress this year made and doubles it–cheers to women and their allies all over for staying strong in the face of a lot of shit.

Keep in mind there’s no real order to a lot of these–I had a definite top film this year, but everything beyond that was really too varied in either tone, style, or intention to be held up in comparison with one another. That said, numbered lists are pretty useful in terms of organizing information–there’s a loose order here, but every film listed was enjoyed and appreciated to its fullest extent.

Here we go with the theme. I’m sure by now y’all know at least some of the plot of Three Billboards, a movie I was sure I disliked on first viewing–not for its content but for the reactions it provoked from the crowd watching. Blame film festival audiences, I guess. My second time seeing it I was lucky enough to be seated next to one of the most thoughtful people I know, and a solid movie critic to boot.
I’m grateful for the chance at reevaluation, and went away from the film with a deeper appreciation and curiosity–appreciation for how the film was able to create such oddly believable sentiment in an obviously over-the-top environment (I’m crediting Flannery O’Connor at least in part) and curiosity at whatever it was in Martin McDonagh’s direction that still frustrated me. I’m fine with being frustrated–my goofy ass might even prefer it. Will definitely have to give this one more thought at time goes by. (Soundtrack was aces, though–I’m sure folks have elsewhere sung its praises, but it warrants another mention.)

Katherine Dieckmann’s Strange Weather takes a similar plot but places its characters in a more realistic setting. Holly Hunter plays Darcy Baylor, a woman whose son committed suicide years before in less than clear circumstances. Strange Weather captivated me right from the start with its tone and pacing. Even more than her anger, I felt Darcy’s utter exhaustion and frustration with systems of power. Melanie Lynskey’s character in I Don’t Feel at Home in This World Anymore has suffered a lesser offense–her house was broken into and her computer (whoops, sorry–her computer AND medicine AND silverware) stolen, prompting a search for the criminals that results in unexpected violence. Out of these three sort-of vigilante films, Macon Blair’s debut takes the plot to its limits, showing the potential harm of pursuing justice independent of its usual means.

Of these three films, Strange Weather stood out most for the truth of its lead performance–maybe it’s a false impression, but it’s feels nice when actors (women in particular) are just allowed to breathe by a director. Holly Hunter was given this freedom as Darcy, and in the year of Wonder Woman helped to expand what’s meant by the term “strong female character.” Not really essential but noteworthy nonetheless: Carrie Coon as Holly Hunter’s lesbian best friend. It’s minor, but I appreciate when filmmakers show lesbians on their own and not just as one half of a couple throughout a film. 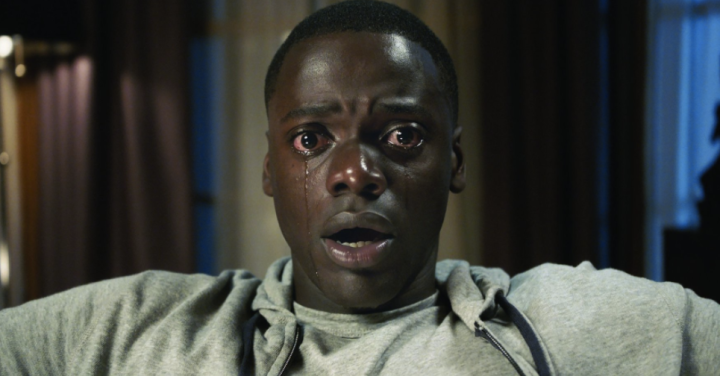 I couldn’t write anything about this one that hasn’t already been said (and better), but will definitely say Get Out is one of the best additions to the paranoia film genre in some time. It really gets at the core of the genre (as with The Stepford Wives–one Peele paid expert homage to in this directorial debut), which is the existence of a very real and valid fear brought on by very real and valid issues. Brilliant performances by Daniel Kaluuya and Lakeith Stanfield establish and build on the film’s tone, while Caleb Landry Jones’ performance adds a believable air of menace. I sincerely cannot wait to see what Jordan Peele creates next.

Slow but never boring, Agnieszka Holland’s Spoor is a meditation on old world versus new world and the different types of wisdom allowed in each. Set in the mountains of the Kłodzko Valley in Poland, Spoor centers on Duszejko, a mid-sixties schoolteacher who is convinced she knows the answers to a series of deaths in the area. I love when a thriller takes its time, and love even more when it loses itself meandering down paths along the way to a conclusion. Life works this way, and Spoor does as well. With her film, Agnieszka Holland paints a vivid portrait of remote wilderness that oppresses those who seek to exploit it.

So okay, obviously not every movie on here fits my declared theme, but I saw Fate of the Furious twice in theaters, and the second of those times was my birthday. It was heaven. I snuck (I’m pretty sure it’s “sneaked”, but you always get funny looks when you say sneaked, don’t you?) a burger and some fries into the place and chowed my way through probably not the best Fast installment overall but for sure the most genuinely entertaining Vin Diesel movie released this year. There’s something very Old Hollywood about Fate of the Furious, I think. Dom and Letty’s romance warms my damn heart, and a perfectly choreographed fight scene with Dwayne “Can We Still Call Him The Rock” Johnson reminded me more of Gene Kelly than any musical number in years. Plus, Charlize Theron as a baddie really perfects the equation–her ponytail was half my reason for watching. 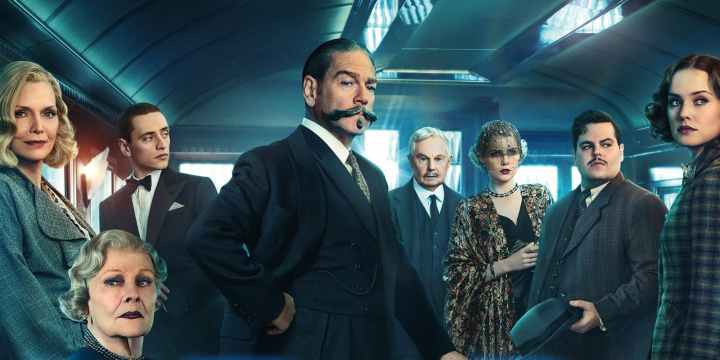 True confession: I’ve got a crush on Kenneth Branagh, and I don’t just mean Kenneth Branagh the actor. His directed works have consistently wowed me, from Dead Again to Hamlet to the bonkers-nutso-crazy 2000 adaptation Love’s Labour’s Lost (you know, the one with Alicia Silverstone that Ebert called so escapist it escapes even from itself”). I think Branagh does it for me because whatever his role–actor, director, screenwriter, etc.–he’s first and foremost a performer. Directorial choices in Murder on the Orient Express confirm as much: from claustrophobic angles of railway car interiors to uncomfortably close shots during the big reveal, the film treats viewers to one hell of a whodunnit experience. Michelle Pfeiffer as the mysterious Mrs. Hubbard (later the grief-stricken Linda Arden, if that’s not giving too much away) plays a pivotal role, and Pfeiffer’s performance stood out in a way few did for me this year. I’m not sure I’d label her work in Murder on the Orient Express particularly good acting, but I was struck by its urgency and effectiveness–could be more of a skill to that, anyway. Combining immersive visuals, an obviously top-notch plot and truly endearing direction, Murder on the Orient Express manages to surprise viewers despite its familiar story.

In The Beguiled, Coppola chooses to film a historically significant narrative but shifts focus from broader politics to women’s stories—specifically white women’s stories. Elimination of any real mention of slavery in a Civil War-set film points to a shortcoming of Coppola’s interpretation, but instead of downplaying systems of privilege this choice only serves to highlight it. The Beguiled creates an insular world, and while Coppola may not intend to articulate it, this world belongs to white women. Though limited access usually protects Coppola’s cloistered women from personal and political threats surrounding them, isolation in The Beguiled only boxes the characters in with this threat. In viewing a period film, I sometimes expect it to serve as a cultural document memorializing history, and might at first think a director has a duty to represent subjects from the past so that something can be learned in the present. Sofia Coppola’s The Beguiled (like Marie Antoinette before it) anticipates a historically aware audience yet repeatedly fails to deliver historical fidelity–for this reason I find it both an especially frustrating and especially fascinating film.

Containing twin narrative threads that span half a century, Wonderstruck is a conventional story told in an unconventional way. There was an extended scene near the end done entirely with miniature figurines and photographs to illustrate portions of the story—call me ridiculous but I’m a big old sucker for stuff like this–pleasantly evoked memories of Haynes’ earlier Superstar and reminded me why I dig the guy in the first place. Parallels between characters worked well without feeling forced, with Haynes opting to limit the sounds of the film to better portray the characters’ experiences. Wonderstruck’s plot was at times predictable, but this predictability felt more like an uncynical homage to Hollywood than like lazy storytelling. Wonderstruck was, in short, a sweet fucking movie. Bonus points for Julianne Moore as a silent film star, a role I never knew I needed her in.

Please see this movie–I’m sure I couldn’t do it justice with any kind of write-up, and I’m much too hung up to try. I’ve seen Beatriz at Dinner maybe five times since the first, and each instance I’m struck by a previously unrealized element. The writing was my first favorite thing about the movie, then pacing, then maybe lighting. Now I’m hooked on the interplay between Salma Hayek’s performance and Wyatt Garfield’s cinematography–neither possible without the considered direction of Miguel Arteta. I can’t imagine anyone giving this one a negative review, though a brief Google search informs me they exist. My guess is the ending puts some folks off–there’s that quote about not being able to please everybody all the time, and it’s probably true, but movies like this one are pure magic–just a gift to the rest of us. I’m reluctant to look at it too closely for fear it’ll dissolve into itself and drift away. (That’s corny as hell I know, but watch the movie and then we’ll talk.)

HONORABLE MENTIONS: THIRST STREET, SUSPIRIA (it was remastered this year, so I’m counting it, ok?), THE LURE, THE FLORIDA PROJECT, RAW, LADY BIRD

DISAPPOINTMENTS: THE SHAPE OF WATER, FILM STARS DON’T DIE IN LIVERPOOL, DOWNSIZING, ANNABELLE: CREATION (maybe it’s my own fault for having high expectations for this one, but man, I dig that original)

Juliette Faraone is 26 and feels it. She hails from the great Midwest and her habits include petting her cats, watching clips from old musicals on Youtube, and trying to figure out if she loves or hates Lars von Trier. In 2016, Juliette served as editorial assistant at Ms. Magazine in Los Angeles and is currently working on her MA in Cinema Studies at SCAD. Her favorite movies include Meet Me In St. Louis, Volver, and Waitress. Her writings on women and film can be found at http://juliettefaraone.com.