#DirectedByWomen REVIEW- The Falling: On female dynamics and the strange ways of adolescence 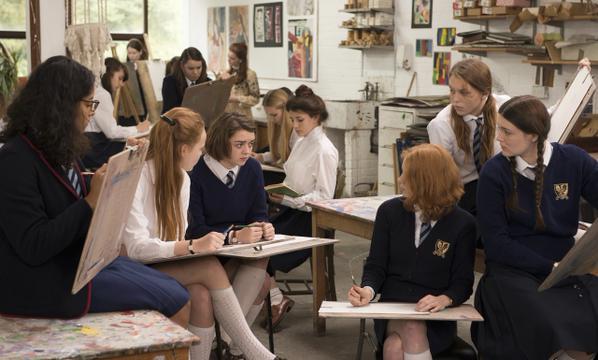 Mass hysteria – or otherwise known as psychogenic illness, has been around since the medieval times. It is most common in closed, womens communities, and to this day, psychologists haven’t figured out the reason to why it occurs in the first place. It often led to yet another reason to oppress women, and have been regarded as “just a female hormone problem”. In The Falling, writer/director Carol Morley explores this phenomenon, while showing us what it’s like to be a woman.

The film focuses on Abigail and Lydia’s friendship. “The time-dismantled oak. Let’s meet underneath it, every year for the rest of our lives.”- says Abbie. Then she and Lydia carve their initials on the tree. Soon we find out, along with Lydia, that Abbie has lost her virginity, and that she might be pregnant. She starts to get strange symptoms, she’s dizzy, and constantly touches her cheek. To get rid of the possible baby, she decides to sleep with Kenneth, Lydia’s older brother. “The French call an orgasm a small death.”– she states after the incident. Lydia (or Lamb, as Abbie calls her), starts to get angry with Morty (Abbie’s nickname), for being so reckless, but at the same time she’s a bit jealous as well. The following day Abbie suddenly passes away- her last breaths mimicking an orgasm, morbidly enough.

Lydia can’t handle the pain, so she unconsciously starts to mimic Abbie’s symptoms, and faints repeatedly. The other girls start doing it as well. Not out of fun, they can’t control it. Almost the entire school gets this ‘sickness’. At one point, even the youngest female teacher, Miss Charron, too.

Through montages, and little tidbits of flashbacks, we get to see inside every character’s lives a tiny bit. The movie does a good job of portraying female characters and their dynamics with each other. For instance, the scene between Miss Mantell and Miss Charron lets the audience to peek behind Mantell’s so harshly built walls, and we get to know she had a miscarriage. It builds up a mother-daughter dynamic between the two women.

The incest storyline is tricky. In a morbid way, Lydia only wants to get closer to Abigail, and Kenneth has been the one who has got closest to her, so she tries to emulate that. We can see this by her genuinely saying “I forgot he was my brother”. But the dangerous thing is, Kenneth never forgot. I don’t want to justify Lydia’s actions, because they were definitely wrong, but she spends the whole movie in a trance like state. Kenneth, on the other hand, is simply sad about Abbie, but instantly gets a new girl, and preys on Lydia.

The generational difference is shown greatly, too. Although the attention is on the young girls, the older women have very important roles as well. Take Eileen, Lydia and Kenneth’s mother. She is an agoraphobic hairdresser, who’s husband has left her, with a shutdown persona, her hand in the sand, seemingly not caring about her own children, and no one else either. All of these layers mean something, it’s all explained, as we get to know she has been raped.

Eileen’s remedy is in saving her daughter’s life, thus bringing her into the light with her arms wrapped around for the first time in who knows long, or maybe ever. Lydia gets to start anew.

The Falling takes very sensitive female problems into it’s hands, and handles and portrays them delicately but gets to the core of things. It is about processing a friend’s death. It is about dysfunctional families. It is about female adolescents exploring their sexuality. It is about the unconscious group mentality, and so much more.

Eszter Jászfalvi is a 16 year old femme from Budapest, Hungary, who’s a self-proclaimed perfectionist, a budding actress, a bibliophile and a beginner cook. Her favourite films include The Virgin Suicides, Marie Antoinette, Psycho, Donnie Darko, The Imitation Game and Brokeback Mountain. She’ll watch anything that Tim Burton and Wes Anderson makes, and whatever Dane Dehaan and Mia Wasikowska acts in. She’s also a serious binge watcher of all the good shows, such as Mr. Robot, Gossip Girl, American Horror Story, Bates Motel and Reign, also Black-ish. You can find her on Instagram @esztisworld and on Tumblr at esztiiscreatingherself.tumblr.com.

High School’s Fury And Folly Is Captured In ‘Stop-Zemlia’

The Starman And His Star Power: Bowie On The Silver Screen

Scream (2022) Provides A Ghostface For A New Generation

Despite The Comedy Pedigree Of This Cast, ‘The Afterparty’ Fails To Deliver On The Laughs