Guillermo Del Toro’s Crimson Peak truly encapsulates the aesthetic of gothic horror in a way that I haven’t seen for quite a long time. However, it is Jessica Chastain’s performance as Lucille Sharpe – the eerily aloof and mysterious sister of Thomas Sharpe (Tom Hiddleston) that in my opinion is the standout part of the film.

From her ice cold glare to the way she appears to almost glide about the house rather than walk, Jessica Chastain creates a character that makes you feel unsettled before she has even opened her mouth. Lucille is the antithesis of her brother, who although seems at bit odd at first, does manage to gain our trust through his carefully created veneer of kindness and normality.

While the ghosts that roam the house provide a few jump scares, it is Lucille who is the truly frightening resident. Her calculated scheme to poison Edith (Mia Wasikowska) through “caring” for her whilst she is bedbound is just one of many increasingly evil ways in which she tries to get her brother back for herself.

Jessica Chastain shows the true scope of her acting capabilities in this role, as she doesn’t tend to play characters that are so unashamedly ruthless and twisted. Crimson Peak’s final scenes are disturbing and bloody and Chastain unleashes a stunning wave of desperation and rage, showing the audience that all semblance of Lucille’s control has been lost and that she has finally revealed her true self. It is captivating to watch and solidified Chastain’s position as one of the industries most versatile actors. 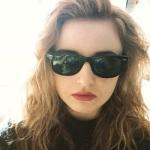 Megan is a 20 year old drop out from Cambridge. She is starting her second attempt at university this year and is hoping to avoid disaster this time around. Most of her time is spent either reading or binge-playing video games. Don’t talk to her about End of Watch or Night Flight as she still hasn’t emotionally recovered from them, and probably never will. Her favourite films are Drive, The Handmaiden, Ghost World and Mad Max: Fury Road.