We most typically associate Christmas films with Elf, The Grinch, It’s a Wonderful Life and ITV showing the entire Harry Potter franchise in the run up to christmas, but christmas films really can be anything, they can be a family tradition, a warm feeling you get inside that reminds you of being next to a fire with a hot drink or simply a story that embodies ideas of christmas spirit and family. With that in mind here are 4 unexpected christmas films that stray from tradition…

If there’s anything a good Dickens novel (or the Pee-Wee’s Playhouse Christmas Special) has taught me, it’s that the holidays are a time to think about what we can do for others. That of course includes how we perceive and treat others, too. There is no more heartwarming, heartbreaking, and straightforward love story than Ali: Fear Eats the Soul.

A German widow (the astounding Brigitte Mira) falls in love with a Moroccan man (a stoic yet emotional El Hedi ben Salem) far younger than her, to the disdain of nearly all those around them. Rainer Werner Fassbinder’s 1974 film is as much about racism, ageism, sexism, and objectification as it is about the state of the human condition. When we are questioning the right of immigrants to live and work (and the right of people of color to simply exist) in our own country, there couldn’t be a more poignant film for this moment in time.

As with much of Fassbinder’s work, there is a real magic in its simplicity. Ali and Emmi fall in love quickly and unexpectedly – a common and often ludicrous thing that happens in other romantic films – but their respect for each other as human beings is what makes their story endure. Watch it on a cold, snowy (or rainy) night, with a coffee, a close friend, and all the feels. –Alex Landers

Lion is one of the most undeniably uplifting films of this year. A sweeping and grand journey across oceans and continents, Lion is based on the incredible true story of Saroo Brierley’s book “A Long Way Home”. The arresting first half of the film focuses on Saroo as a five year old boy. One night out with his young brother looking for work, Saroo falls asleep on a train and becomes separated from his family. After several frightening encounters navigating the slums of India, Saroo is adopted by a wealthy white Australian couple. Dev Patel plays Saroo as a conflicted adult torn between his love for his adopted family and yearning to return to his origins. Saroo cannot correctly remember the name of the village he comes from, so he must resort to using Google Earth to find his hometown. This is an arduous and near-impossible task, much like finding a needle in a haystack. Lion’s ending has an emotional punch that will wring a fountainous flow of tears out of you. I consider this a Christmas film because it is about the power of family, both those bound to you by blood and the family you can create with others. Lion reminds you of the bonds between parents and their child, or brothers, or friends, or lovers. Families can be of all colors, gender, origins, whether directly related or not. Lion is truly one of the must-see films of 2016, and a film that will be remembered for its earnest and passionate spirit. I would love to make watching it a Christmas tradition amongst my family. Saroo’s story is hard to believe, so much so that it seems to be touched by a magic that only Christmastime seems to promise. Only a true Scrooge would cynically turn their nose up at this soul-stirring film. –Caroline Madden

When I was around thirteen or fourteen my parents gave me a John Hughes movie box set for Christmas, it contained Weird Science, The Breakfast Club and Ferris Bueller’s Day Off – that evening we decided to watch Weird Science and for reasons that I’m not entirely sure off; the tradition has stuck. Every year at some point in December Weird Science comes out of the DVD pile – and is just generally known as a Christmas film in my house.

In terms of plot, it’s no Breakfast Club, with the main story revolving around two typically nerdy high school boys Wyatt and Gary, who decide to use a computer, some electric wires and a Barbie to create their dream woman; which in their case turns out to be Kelly LeBrock. The rest of the film sees her attempt to make them more confident in themselves and therefore be able to ask out their high school crushes. It all sounds pretty unoriginal – which I suppose it is to an extent – but it is also a John Hughes film. Like always, he gives it more depth through well thought out side characters like Chet (Wyatt’s tyrannical yet super stupid older brother) and consistently funny/surreal comedy moments; my favourite being the arrival of several characters from Mad Max (I still don’t know why this happens??) at the house party Wyatt throws.

So even though there is nothing even slightly Christmassy about it and I’m pretty sure it is set during the summer – Weird Science will always be a “Christmas movie” for me as well as being one of my all time favourites. –Megan Gibb 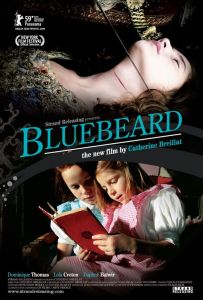 I first saw Catherine Breillat’s Bluebeard on Christmas Eve during winter vacation my freshman year of college, and since then have always associated it with the holiday. I must have taken in about thirty movies that winter break, but Bluebeard features most prominently in my memory because I felt so close to its characters at the time. Based on the fairy tale put to words by Charles Perrault, Breillat’s 2009 film is almost academic: the actors say their lines as if dreaming, and plot is held up for study at a distance. This is not typical Breillat–emotions run high in several of her other films (The Last Mistress comes to mind), but characters in Bluebeard tend to keep their cool, even if sentenced to death.

In viewing the film today, I’m struck by the same elements which first took me by surprise, and comforted by those which felt familiar. The film uses a frame narrative to set up the famous fairy tale plot, and both this frame narrative and the internal narrative feature pairs of sisters. We meet the first pair, Marie-Anne and Catherine, as they explore in their attic and begin to read the story of Bluebeard. Within the story, we are introduced to Anne and Marie-Catherine, the latter of which eventually weds the titular count, a wealthy man who comes with a history of violence. For those who have read the fairy tale, the film is more or less as expected until the ending –it is this ending which still devastates me in the best of ways.

When I first watched the film, I felt a bit like the girls in the attic–eager to be drawn into a story as I lie on my childhood bed with my laptop propped open on my stomach. Netflix had started its streaming service about a year and a half prior to my viewing the film, and it was still at that time a marvel to be able to watch a movie anywhere I had an Internet connection. It can be a difficult thing to grow up as a girl, especially in times of transition. As I get older, I’m increasingly grateful for these solitary memories. It’s probably silly to feel sentimental about something like a streaming film service, but hey, this girl can’t help it. My alma mater was a private women’s college in the middle of the woods with about 400 students, and being back in the “real world” following a semester in a semester like that could feel somewhat jarring. Netflix allowed me to experience things at my own pace, which is exactly what I needed at that point in my life. –Juliette Faraone

Alien-Parasite Flick ‘Black Friday’ Offers Up Some Fun, But Doesn’t Fully Deliver on the Deals