‘Writers Choice’ is a monthly segment. Each month a theme will be chosen and the contributors asked to choose a film to mini-review based around said theme. This months theme is ‘Revenge’. 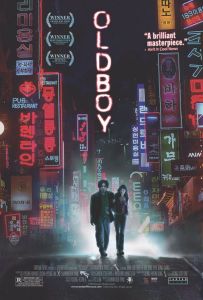 Not only does Chan-wook Park’s Oldboy transcend its accompanying instalments, its hyper-violent (near animated) take on vengeance may very well define the genre.

To somehow characterise this film, would be to limit it to standards we’ve already set. To place it amongst the likes of things we are already familiar with would be a demotion to all of its  greatness. In most cases, I’d be against claiming cinematic superiority, but if Oldboy isn’t the Citizen Kane of unflinching revenge tales then… what am I working toward, really?

On paper, however, Oldboy is the story of Oh Dae-su, a man whose abduction takes place on the day of his young daughter’s birthday. Upon his “release”, after being held against his will for about 15 years (paralleling the viewers own experience), he, too, immerses himself in the chaos of it all, prompting the most mean spirited acts to ever traverse the big screen. Each shot, more devastating and exhilarating than the next, with a shocking conclusion to haunt moviegoers for decades. –Kassandra Karlstrom 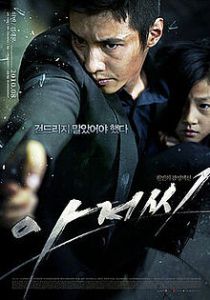 In my opinion, South Korean filmmakers are the greatest depicters of the revenge theme. Perhaps the most well-known is Park Chan-Wook’s Vengeance Trilogy, Oldboy, Lady Vengeance, and Sympathy for Mr. Vengeance. There are countless others that I would recommend such as I Saw the Devil, Bedeviled, Mother, and The Housemaid. However, possibly my absolute favorite is The Man From Nowhere. It shares similar threads to Leon: The Professional. The story revolves around a retired special agent who forges a bond with his neighbor, a neglected little girl with a drug addicted mother. Tae-Shik has attempted to live his life in solitude, quietly running his pawn shop, but when the girl, So-Mi, is kidnapped by violent criminals he must hunt them down and save her. Tae-Shik soon finds himself caught within the underbelly of criminal life, uncovering the mob’s ties to organ harvesting as the police simultaneously go on a manhunt for him. Slowly throughout, the inscrutable agent’s tragic past is unfolded. However, I do not want to spoil anything that is revealed about Tae-Shik, for it culminates in an incredibly touching ending, with the poignant relationship between Tae-Shik and So-Mi at its center. Director Jeong-beom Lee combines moving emotions with dark and visceral style. The action scenes with their intricate fight choreography are absolutely impeccable. I cannot recommend The Man From Nowhere highly enough. It combines all of the thrills and emotional attachments that make a revenge film such an engaging and captivating genre.  –Caroline Madden 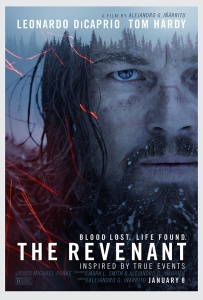 We all heard about The Revenant. How could we not? “Leo gets raped by a bear!”, they harmoniously cried. “Leo may finally get the Oscar!”, they (correctly) predicted. “Leo Leo Leo!”, they enthusiastically chanted. “Leo!”, added a lone distant voice from somewhere in the crowd, who soon slumped awkwardly in his chair, embarrassed that everyone had agreed on three Leo’s without him.

But what about the plot? The characters? The overarching theme of COLD-BLOODED* REVENGE? (*literally coldblooded. There was crawling through snow and icicles in  beards and sleeping in horse skin for warmth??? Freezing cold).

Hugh Glass (Leonardo DiCaprio) is the father to Hawk (Forrest Goodluck), a half-Native American who cares for his dad after he’s attacked by a mother bear (Mother Bear) – until he himself is killed by racist bigot John Fitzgerald (Tom Hardy) who kinda sorta tries to kill Glass too.

With a title of “The Revenant” and a theme of Revenge, the two similar words are tightly interwoven by director Alejandro Iñárritu as he raises the revenant in question, a famished and fragile Glass, from his shallow grave. And Glass has only one thing on his mind: vengeance. Vengeance for being buried alive, vengeance for being abandoned and vengeance for his son’s murder.

Despite this, his is not the only tale of revenge in question. We have another native tribe, for example, searching for the chief’s daughter – who’s been kidnapped and raped by white tradesmen. (Her ensuing revenge scene against her rapist is… Exactly how all rapists should be treated).

Yet it is The Revenant’s primary plot line that redefines revenge, its cold-heartedness and brutality on full show throughout. Set in a winter landscape and purged of any warm, happy endings, The Revenant proves revenge is a dish severed cold – and bloody raw. –Sharon Igbokwe 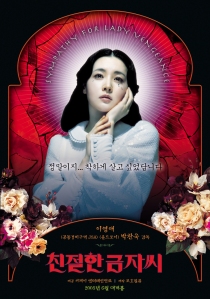 Park Chan-wook’s Lady Vengeance (2005) – the final film in his brilliant ‘Vengeance Trilogy’ is the ultimate revenge thriller in my humble opinion. From the moment it begins and we come face-to-face with Geum-ja, the blood-red eye shadow wearing anti-hero, to the somewhat stomach churning climax – Lady Vengeance is a tour de force of violence, anger, despair and betrayal – all of which are vital to creating a classic revenge movie. What elevates Lady Vengeance far above many other similar films is how it explores other facets of humanity, such as love, the importance of family and just how far we will go to protect such things, rather than being a repetitive kill-fest.

The scenes between the recently reunited Geum-ja and daughter Jenny provide several necessary breaks from the violence and brutality that is otherwise going on. These moments see the two desperately trying to get to know each other and dealing with the resentment and guilt that has built up due to the circumstances of their separation – whilst struggling to communicate due to a language barrier. The polarity between the Geum-ja we see with Jenny and the ruthless woman who destroys anyone who crosses her or attempts to foil her carefully crafted plan of revenge, makes her a fascinating character to watch.

What sets Lady Vengeance apart from its peers is the abundance of female characters and how the small number of male characters are shown as weak, in terms of mind and body – compared to the other women and in particular Geum-ja. Seeing a film reverse the usual roles given to men and women in pictures that explore revenge and to do it so well is refreshing and gives Lady Vengeance a perspective not often seen on screen. Something that sadly remains all too rare. –Megan Gibb