LESBIAN TROPES AND WHERE TO FIND THEM: The Bisexual Lesbian

Back in April, we introduced a new series, LESBIAN TROPES AND WHERE TO FIND THEM. You can find part one here. This month, we turned our focus to one of the most prevalent (and most damaging) tropes found in lesbian film: THE BISEXUAL LESBIAN. Read on for Juliette’s take.

My least favorite of the tropes and what also seems to be the most common in contemporary film, the bisexual lesbian shows up when characters written as lesbians or women attracted to other women end up sleeping with men. This depiction of lesbians perpetuates dangerous stereotypes. Directors who portray lesbians as being romantically or sexually interested in men are acting thoughtlessly, if not irresponsibly. Such a portrayal fuels the myth that lesbians are secretly attracted to men and puts actual lesbians at higher risk of harassment and sexual assault. While some of the characters in the films below don’t necessarily identify as lesbians, we might wonder why the pattern is so often the same—why women shown to be interested in other women suddenly choose to be (and often end up) with men.

The Kids Are All Right

The kids might be all right, but I definitely wasn’t. What a fucking slap in the face to lesbians everywhere. I’ve read what Lisa Cholodenko had to say about her 2010 film—she basically admits to catering to male audiences, and it shows. General artistry: Yeah, okay, it’s a well-made film. The music’s great, and the two leads wear some nice leather cuff bracelets.

Lesbian watchability: 3/10. Check out the first half for some certified lesbian cuteness between Annette Bening and Julianne Moore, but do yourself a favor and skip the rest. If you choose to keep watching, you’d better keep some tissues handy so the blood won’t stain your carpet after you’ve clawed your own eyes out. 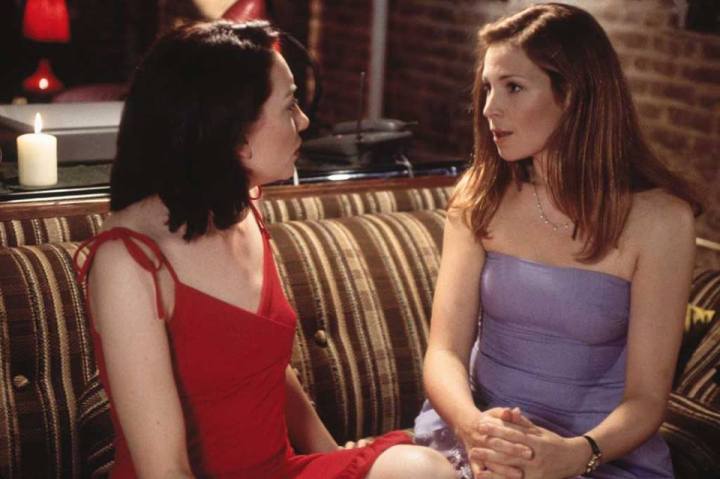 It’s like the Old Yeller of lesbian movies—if you can manage to skip the last fifteen minutes, everything will be okay. True, Jessica doesn’t ever call herself a lesbian, and would be better described as a bisexual—but again, we’re looking at how same-sex relationships between women are treated by filmmakers and the narrative, and this one further establishes a pattern of women in relationships with other women ending up with men. Artistry: Great. Its two female leads, Jennifer Westfeldt and Heather Juergensen, serve as co-writers and co-producers of this 2001 film, and do a terrific job of crafting New York dialogue that’s every bit as witty as Woody Allen’s without all the male-centricity.

Lesbian watchability: Pretty high, but be careful with the ending.

Lifelong lesbian falls for Ben Affleck and it’s not just a dream. Of all the lesbian movies to be featured in this series, Chasing Amy frustrates me the most, and it’s because the attitudes expressed by Holden (Affleck) are attitudes I’ve personally encountered in men since coming out. And I’m sure y’all have encountered the same thing. Seriously, the following is an actual speech given by Holden, in which he confesses his love for Alyssa, the aforementioned lifelong lesbian. Tell me if it sounds familiar.

“I love you. And not, not in a friendly way, although I think we’re great friends. And not in a misplaced affection, puppy-dog way, although I’m sure that’s what you’ll call it. I love you. Very, very simple, very truly. You are the-the epitome of everything I have ever looked for in another human being. And I know that you think of me as just a friend, and crossing that line is the furthest thing from an option you would ever consider. But I had to say it. I just, I can’t take this anymore. I can’t stand next to you without wanting to hold you. I can’t-I can’t look into your eyes without feeling that-that longing you only read about in trashy romance novels. I can’t talk to you without wanting to express my love for everything you are. And I know this will probably queer our friendship – no pun intended – but I had to say it, ’cause I’ve never felt this way before, and I don’t care. I like who I am because of it. And if bringing this to light means we can’t hang out anymore, then that hurts me. But God, I just, I couldn’t allow another day to go by without just getting it out there, regardless of the outcome, which by the look on your face is to be the inevitable shoot-down. And, you know, I’ll accept that. But I know, I know that some part of you is hesitating for a moment, and if there’s a moment of hesitation, then that means you feel something too. And all I ask, please, is that you just – you just not dismiss that, and try to dwell in it for just ten seconds. Alyssa, there isn’t another soul on this fucking planet who has ever made me half the person I am when I’m with you, and I would risk this friendship for the chance to take it to the next plateau. Because it is there between you and me. You can’t deny that.”

Next month, stay tuned as we turn our focus to the trope of the TRAGIC LESBIAN, and as always, comment and share. Let us know what movies you’d like to see here at ScreenQueens–we love hearing from you.

Juliette Faraone is 25 and feels it. She hails from Indiana and her habits include petting cats, reading books, and annoying her girlfriend with movie trivia. When she finally gets around to grad school, she plans to pursue a degree in gender studies and comparative literature. Her favorite films include Alien, Set It Off, and Meet Me in St. Louis. She rants about feminism at juliettefaraone.com

Categories: Anything and Everything, Feminist Criticism

Tagged as: chasing amy, juliette faraone, kissing jessica stein, lesbian tropes and where to find them, LGBT, the bisexual lesbian, the kids are all right