TALK TO THE INTERNET: Ashley Obinwanne (Lavender Collective/Lesbians Over Everything)

Artwork by Chloe Leeson
In ‘Talk To The Internet’, we take the same 10 questions and one internet sensation to find out their loves, their hates and their dream casts in the world of film.
Ashley Obinwanne is a Nigerian-American writer. She is the creator and director of the web series Lavender Collective and co-founder of Lesbians Over Everything. a blog which seeks to highlight lesbian voices and experiences. When she’s not busy coming up with new ideas, she can be found procrastinating or listening to Tegan and Sara.
How did you get into directing?
I’ve been writing on and off since I was in the 8th grade—short stories mostly, a few scripts here and there. Lavender Collectivestarted as an idea for a film shortly after I moved to LA. The funding didn’t come through, so I decided to turn the concept into a web series in an attempt to lower the cost of production. I wrote the scripts, found the location, and cast the actresses. When it was time to direct, I felt that I was most suited for the job because I had worked on the project since its inception. In general, I think that the person who writes a story should be the one who directs it.
What’s your favorite film and why?
I don’t have a favorite film. I would rate most of the films that I’ve seen and enjoyed 3 stars out of 5.
What’s the best lesbian film you’ve ever seen? The worst?
If you mean lesbian films that were actually directed by lesbians, the best one I’ve seen is Itty Bitty Titty Committee. It was funny, and I love the fact that there was a radical feminist vigilante group called “Clits in Action.” I have to give a shout out to Jamie Babbit for directing both this film and But I’m a Cheerleader, because I thoroughly enjoyed both of them.
The worst lesbian film I’ve seen is And Then Came Lola. I’m all about supporting lesbian films, but that one was so bad that I couldn’t bear to sit through the whole thing.
If you include lesbian films that were directed by non-lesbians, then the best one I’ve seen is Carol, and the worst one is literally every other one.
What lesbian movie trope pisses you off the most?
A “lesbian” falls in love with a man. Straight men are so delusional and egocentric that they can’t accept the simple fact that lesbians aren’t interested in them. This fact comes across clearly whenever they choose to depict lesbian characters in their work.
Orange is the New Black or The L Word?
The L Word because it was primarily about lesbians. I know we all love to talk shit about it but the impact that it had as a show that portrayed lesbians as actual human beings on mainstream television in 2004 cannot be stated enough. I like Orange is The New Black, but all the male prison guards piss me off, and don’t even get me started on Sam Healy.
Who is your favorite female character from Film or TV?
Jenny Schecter from The L Word. I’m aware of the fact that this is an unpopular opinion, but I loved her up until season six (I want to keep pretending that season six never happened). Her transformation from timid closeted girl in season one to fearless outspoken woman by the end of season two was amazing to watch.
What was the last movie you watched?
La Dictadura Perfecta. It’s about this crooked Mexican politician who pays the most prominent news outlet in the country to only report good things about him.
Who or what inspires you in your day-to-day life?
I get inspired to write whenever I watch a scene from a movie or TV show that I like a lot.
Who are your biggest role models?
Shonda Rhimes and Jamie Babbit.
What is your next project?
My next project is a short film called “Adapting.” It’s about girls in a Nigerian boarding school. I’m currently writing the screenplay, and I plan on traveling to Nigeria to film it in October. If all goes as planned, it should be out by next year.
By Juliette Faraone 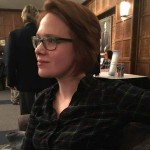 Juliette Faraone is 25 and feels it. She hails from Indiana and her habits include petting cats, reading books, and annoying her girlfriend with movie trivia. When she finally gets around to grad school, she plans to pursue a degree in gender studies and comparative literature. Her favorite films include Alien, Set It Off, and Meet Me in St. Louis. She rants about feminism at juliettefaraone.com

Categories: Interviews, Talk to the Internet

Tagged as: ashley obinwanne, interview, juliette faraone, lavender collective, lesbians over everything, talk to the internet