‘Writers Choice’ is a monthly segment. Each month a theme will be chosen and the contributors asked to choose a film to mini-review based around said theme. This months theme is ‘Environment’

The Way Back is a stunning, grandiose visual spectacle and riveting World War II drama. It tells the story of a group of Soviet Union labor camp prisoners who escape from their Siberian Gulag and travel to Mongolia. Their treacherous journey takes them across thousands of miles and tumultuous environments. Jim Sturgess, Colin Farrell, Ed Harris, and Mark Strong lead the cast along with a young Saoirse Ronan (who always delivers incredible performances) as a young girl they discover on their travels. The group is always in danger of being caught and they continually struggle to work together in spite of their overwhelming odds. The chemistry and strong performances of the group lead the viewer to become strongly attached to these characters as they make their way on this incredible journey. Aside from the acting, the absolute highlight of The Way Back is its sweeping landscapes. The film travels from the freezing and snowy Siberia to the vast, sweltering Gobi Desert to the majestic Himalayas. The group suffers at the mercy of the elements, the extreme heat and cold of each environment tortures them. They battle sandstorms, blizzards, dehydration, lack of food, sunburn, blisters, frostbite, and sunstroke. It is simply staggering to see the immense amount of miles the group walked and the elemental dangers they overcame. The Way Back is a rousing portrayal of hope, bravery, and human survival against unsurmountable odds. –Caroline Madden

The world can be a hostile place for women. Neil Jordan’s 2007 film The Brave One illustrates this point through use of light, sound, setting, and performance. Jodie Foster is New York City radio host Erica Bain, whose fiance is killed during a brutal mugging in Central Park. From the moment she’s mugged, the city is presented as a hostile environment. This environment can be dangerous for anyone individuals venturing out on their own, but poses a unique risk to women, especially those who stay out past a certain time or travel to “unsafe’ areas of town. Though it’s true toward the end of the film Erica Bain seeks vengeance against the individuals who attacked her and her fiance, revenge is not Erica’s primary motivation. This is an important distinction. When The Brave One was first released, many critics compared it to Death Wish, and while such a comparison is valid, it’s interesting to note the ways in which we can apply gender criticism to our readings of each film. Following her attack, Erica is angry and traumatized. Her beloved New York has become a threat, and in seeking out and buying a gun, Erica attempts to regain control over situations in which she feels threatened. Though presented at the time as a gritty revenge thriller, The Brave One tells the story of a woman attempting to live in her environment as a human being, and the ways in which she is limited by that environment. –Juliette Faraone 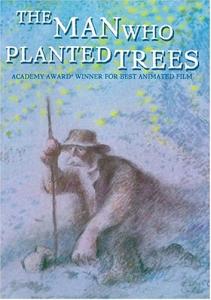 Frédéric Back’s The Man Who Planted Trees is the cinematic equivalent to being read a bedtime story — albeit it is the poignant yet tender intonation of Christopher Plummer that recounts the tale and not so much the familial pitch that once brought you to slumber in the days gone by, its warmth is all the same. This Academy Award winning animation rehashes the periodic encounters of a vagabond man and a shepherd whose pipe dream is to rehabilitate quarantined land. Within its incorrupt thirty minute window, the formerly ambiguous sketches emerge as both stimulating and full of life, in parallel to the mended ecosystem.

What ultimately prompted this choice for me was its complete lack of self-congratulation. The finished product plugged the respective world wars (and their overt domino effect on the environment) so unassumingly. Instead of pointing fingers, Frédéric Back’s adaption focused on individual accomplishments rather than the ‘bigger picture’, and did so with such restraint. Its gradual and quiet progression felt incredibly sincere, as did the conspicuous message: If your run-of-the-mill, twentieth century shepherd can work against a profit-driven society and create something beautiful, so can… well, just about anyone.

On the assumption that your linguistic habits actually belong in the Indo-European family, it’s worth mentioning that a French version is very much available, with Cinema Paradiso’s own Philippe Noiret in the limelight. –Kassandra Karlstrom 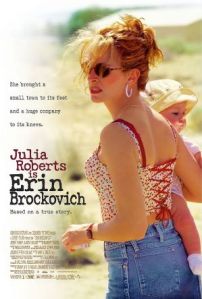 Erin Brockovich is a biographical film directed by Steven Soderbergh, written by Susannah Grant. The film tells the story of Erin Brockovich (Julia Roberts), an American environmental activist who played an important role in the case against Pacific Gas and Electric Company of California in 1993. Despite her lack of formal education in the law, Brockovich was successful, making her story – and by extension, the film – a source of inspiration for feminists and environmentalists. Not only did Brockovich win the case, she won the largest settlement ever paid in a direct-action lawsuit. The film begins with Brockovich as an unemployed single mother of three children, who has recently been injured in a traffic accident with a doctor and is suing him. From these small beginnings, Brockovich makes a name for herself and makes an incredibly important difference in the world. I first watched this film when I was younger and each time I watch it I come away with the desire to become an environmental lawyer and put corporations in their place. Erin Brockovich is a truly incredible story of a woman who demands respect, and uses her passion and outspoken nature to genuinely do some good in the legal world. –Georgia Berry

Tagged as: caroline madden, environment, erin brockovich, georgia, juliette faraone, kassandra karlstrom, the brave one, the way back. the man who planted trees