REVIEW- The Voices: On talking animals, serial killers, and the angelic woman 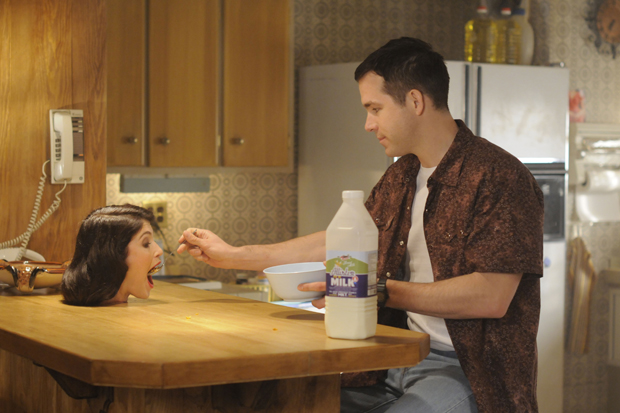 The story of The Voices, about a schizophrenic man who kills women and keeps their heads in a refrigerator, could very easily tread into offensive and sexist territory. Since The Voices is a black comedy, it is essentially asking the viewer to have a sense of humor about the violence abuse and murder of women. This is understandably problematic. But talented female director Marjane Satrapi (Persepolis) deftly balances the gruesome with the charming and the hilarious with the tragic.  The film is set in a flat, non-descript and boring middle America. The lead character Jerry, played by Ryan Reynolds, is a well-meaning but slightly dim-witted employee of a bathroom company Milton Faucet and Fitting. Satrapi uses Tim Burton-esque pastels, particularly in the employee’s campy pink jumpsuits, to signal the company’s banal suburban existence and blind conformity. This also places the film in its loopy otherworldliness where Satrapi will force the viewer to share in Jerry’s insanity.

Gemma Arternon, Anna Kendrick, and Ella Smith round out the cast as Jerry’s victims. The absurdity of Jerry’s outlook is underpinned with Satrapi’s visuals of these female characters.  In one shot, Jerry sees Arternon’s character as a literal angel with a glowing light emitting from behind her. Here, Satrapi demonstrates Jerry’s idealized visions this woman which is clearly not in line with her reality. Jerry engages in a tug-of-war throughout the film, fighting between his murderous urges and his genuine feelings for these women. The voices in Jerry’s head are personified a homely and kind dog named Bosco and an angry Scottish cat who encourages Jerry to act on his killer instincts. Both are voiced by Ryan Reynolds.

The Voices takes a distinct turn in one of the most horrifying film moments I’ve ever seen. Jerry’s home is usually pictured as a clean, beautiful, and brightly sunlit home. Shots reveal that Jerry really lives in a decrepit and filthy dungeon filled with piles of bloody Tupperware containers holding body parts. Here, The Voices becomes primarily a commentary on dangerous and hidden mental health problems. When Jerry takes his medicine, the true disgusting nature of his circumstances are revealed. When he doesn’t, he is able to envision his home as a picturesque dreamworld.

The Voices manages to situate itself alongside American Psycho, another female-directed depiction of a male serial killer.  Like American Psycho, Satrapi places us in the killer’s absurd point of view, exposing the ridiculous and awful nature of his crimes. However, what separates The Voices is not only Jerry’s child-at-heart nature but his sympathetic portrayal. We see in heartbreaking flashback scenes the root of Jerry’s mental health issues, stemming from his complicated relationship with his schizophrenic mother. In American Psycho the lack of psychological explanation for Bateman allowed the viewer to ridicule him. This compassionate backstory and portrayal of a murderer arguably problematizes The Voices.

Ryan Reynolds gives an absolutely phenomenal performance in this genre-bending film. He manages to plunge the darkest depths while simultaneously offering the fantastic comedic chops he is so well-known for. If the strange Bollywood-esque ending sequence where the cast sings “Sing a Happy Song” is any indication, this unique blend of comedy and drama depicting a male serial killer will certainly divide viewers. The Voices is a horrifying and hilarious mind trip, both morbid and heartfelt. I believe Satrapi’s absurd blend of reality and fiction allows the viewer to sympathize with Jerry while recognizing how awful his disgusting and severe crimes against women are. However, the film’s handling of gender roles is open to closer examination. On the whole, it is interesting to see a female director tackle this kind of male story and open discussions left behind from films like American Psycho.

Categories: Anything and Everything, Reviews, Women Film-makers