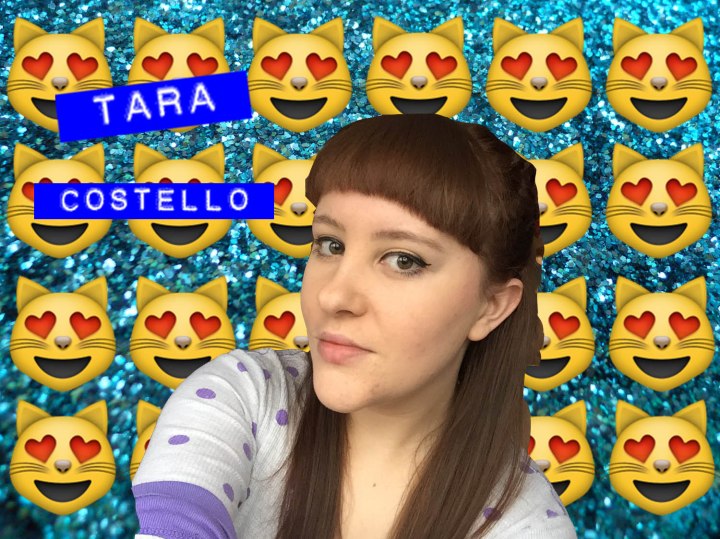 In ‘Talk To The Internet’, we take the same 10 questions and one internet sensation to find out their loves, their hates and their dream casts in the world of film.

Tara Costello is a previous film student and current blogging wizard, running the fantastic feminist blog Cattitude & Co. where she discusses sex, body positivity and her favourite topic, periods. Aiming to shed light on the questions most teen girls are dying to ask Tara faces the topics head on and in the most welcoming manner possible. She has also recently started a Feminist Film Club and Book Club with Cattitude & Co. and is one half of the women’s lifestyle blog Zusterchap. She loves cats, food and collecting stationary. You can follow her on twitter @Catstello

What’s your favourite film and why?

This is probably the hardest question you can ask a cinephile. Like many former film students, I have a ton of favourite movies all chronologically ordered to a tee!

However, the one film that will always stand out as a favourite is American Beauty. I was first introduced to this film during an English lesson and it just ignited something in me. I had no idea moving pictures could make me feel such beautiful and complex emotions. I was a misunderstood teen and something about this movie just resonated with me; I had no idea I could relate to characters. It was the first time I truly appreciate the beauty of cinema and it was the start of a life-long passion for moving image. I never watched a film in the same way again after American Beauty. It made me question and analyze everything I watched and I developed an appetite for films that subverted and challenged ideologies that were being sold to us. It was the film that made me want to make films. It basically changed my life.

For a long time, no other film has had such an impact on me. In recent years, one film that particularly stands out is Mad Max: Fury Road.

What’s the worst film you’ve ever seen and why?

Drive, 100%. Not even sorry. I’ve also only ever walked out of the cinema once, and that was when I went to see Elektra.

If you could make up your own imaginary film genre what would it be called?

I’m not sure on a name, but I’d love my genre to be a positive and revolutionary one. I’m a former filmmaker myself, so I always fantasise about returning to filmmaking and really working towards becoming the change I want to see in the industry. My genre would be made for women by women. We’d mock sexist tropes like the male gaze, and absolutely crush gender stereotypes. I’d work with a multitude of women and aim to be as inclusive as possible.

If you were given the opportunity to direct, who would you cast in your dream movie?

I would cast all of Hollywood’s leading men as supporting characters.

Who is your favourite woman character from Film or TV?

Tina Belcher! She is awesome in so many different ways. The most obvious probably being how sex positive she is. For a teen character in a network sitcom, this is most unusual. We’re usually used as objects of desire just so we can respond to high school horndog types. But this isn’t the case at all with Tina. She is fully aware of and understands her sexuality. It isn’t used to mock her, it isn’t ignored and it isn’t her sole identity either. She is a sexual subject instead of an object, which really is a complete empowering breath of fresh air in American sitcoms.

I’m also a big fan of women, both in television and film, who are complicated and contradict themselves, because we’re only human!

In your opinion, what is a seriously under-rated cinematic masterpiece?

Oh my god, there are so many! I think Fritz Lang’s Metropolis is seriously underestimated. The influence and cultural significance this movie has had, and still holds today, is just phenomenal. It’s amazing how much impact a silent movie from the 1920’s has had.

Rank your top 3 films by your favourite director (if you have one!)

(I have way too many favourite directors to even answer this question, sorry!)

What was the last film you watched?

I recently re-watched 500 Days of Summer for my Feminist Film Club!

“… I have lost something. I’m not exactly sure what it is but I know I didn’t always feel this… sedated. But you know what? It’s never too late to get it back.”

And finally, what film are you most looking forward to in the near future?

I am ridiculously excited for Witches, I hope I get a chance to view it here in the UK.

Chloe Leeson is the founder of Screenqueens. She is 20 and from the north of England (the proper north). She believes Harmony Korine is the future and is pretty sure she coined the term ‘selfie central’. She doesn’t like Pina Coladas or getting caught in the rain but she does like Ezra Miller a whole lot. Her favourite films are Into The Wild, The Beach and Lords of Dogtown. But DON’T talk to her about Paranormal Activity. She rants about cinema screenings @kawaiigoff.

Categories: Interviews, Talk to the Internet