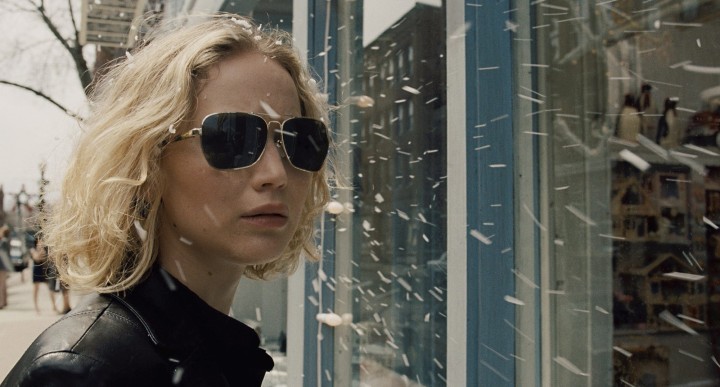 Joy is a hard working and inventive woman surrounded by her dysfunctional family who have all decamped to her house for sanctuary. The entire film is made of the family being unpleasant to one another in a multitude of different ways. The family is made up of Joy’s selfless grandmother, reclusive mother and out of work ex-husband. Then her father moves back in.

The action is catalysed by his sudden reappearance. Divorcing his third wife, De Niro begins dating Trudy, a wealthy Italian widow. Robert De Niro and Isabella Rosselini excel as the father and father’s girlfriend from hell.

It’s on Trudy’s yacht that Joy has the idea. A self wringing mop. It’ll revolutionise the world if only she can make it and sell it and fund it.

Flashbacks give us more of Joy’s story, from her short marriage to Tony, an aspiring but unemployed singer, her friendship with Jackie (Dascha Polanco from OITNB) to her years long rivalry with her older half-sister Peggy.

As a study of mental illness in a family it is interesting and thoughtful. All the dysfunction of the family is made to appear linked to the divorce of Joy’s parents when she was younger. After the divorce Joy’s mother stays in bed watching Dynasty and is only freed from this repetitive prison by facing her fears.

It’s a film with a single dazzling scene in which Bradley Cooper makes you believe in the power of teleshopping. Joan Rivers is played by her daughter, Melissa Rivers and it is uncanny.

Jennifer Lawrence gives strength and empathy to the role. The last half of the film sees Joy cut off her hair, negotiate a successful business deal and stride through a town in Texas with sunglasses on. Joy shoots cans in a backyard next to her Dad’s garage in a scene that is stolen from an early Mad Men episode that shows Betty Draper shooting birds in her garden.

All the scenes are beautiful looking and stylised (snow features heavily), but the humour, brevity, and pace of Silver Linings Playbook and American Hustle are lacking. Joy takes an age to finish. The final scene, years later, is a disappointing ‘I know how you feel I have been there’ moment, and ruins the previous elation of the previous final scenes. Despite Jennifer Lawrence’s strong performance, something is lacking.

Maya is a seventeen year old from Lincolnshire who spends all her time thinking about teen films, Gael Garcia Bernal and feminism.  Her favourite films include Pride, Mood Indigo, Lore, and Ida. Tweet her about burritos @ayaM_esoR

‘Lockwood & Co’ Is Dynamic In Its Direction, Detailed In Production And Dazzling All-round – Series Review

‘Aftersun’: Exploring Father-Daughter Bonds In The Memories Of An Eternal Summer