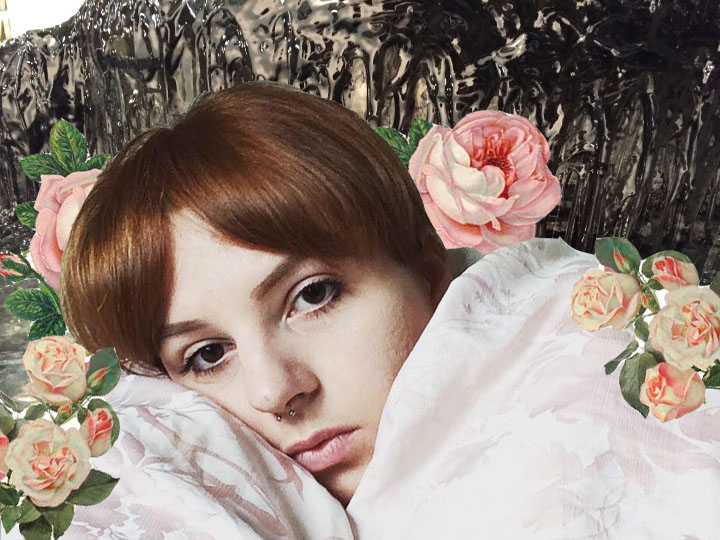 For ‘Talk To The Internet’ we take the same 10 questions and one internet sensation to find out their loves, their hates and their dream casts in the world of film.

Ellie Hoskins is a 20 year old artist from Carlisle, but currently residing in Liverpool for uni. Often referring to herself as ‘floaty flo’ she paints and draws whimsical characters and muses on the mundane activities we undergo everyday in a hilarious manner, check her work out on her instagram. With her other free time she is starting to show her work, illustrate for SQ and work on collaborative pieces with her friends at uni. For more insight into the x factor finalists and the meaning of life you can follow her on twitter @floatyflo.

Here she discusses ‘artist academia’ movies, her passion for Kill Your Darlings and Girl, Interupted…

What’s your favourite film and why?

This is so difficult. I love choosing favourites but it’s a pain in the arse when you’ve got so many. I’m conscious that I always come back to the same cliché conclusions but The Perks of Being A Wallflower is definitely one of my favourites. I mean the soundtrack is absolutely golden for a start and I love it when you can listen to a full soundtrack and feel the feels that the movie scenes ignited visually. It’s one of those teen movies that will consistently provide me with nostalgia and as I get older I am more appreciative of the coming-of-age movies that helped me come to terms with my own coming-of-age.

What’s the worst film you’ve ever seen and why?

My uni tutor started a night school thing where we would mingle with all year groups and learn about things that we normally wouldn’t be exposed to on a fine art course. So one week he played the original star wars alongside the Turkish equivalent. It was interesting to see how the extremely low budget affected the plot and visuals but it was just awful to sit through once the hilarity of it had worn off.

If you could make up your own imaginary film genre what would it be called?

This is such a fun question. OkAY. I can’t think of anything to call it other than artistic academia but I think that sounds really lame. Anyway, its aim would be to inspire people using the lives of creative intellects and this could include both fiction and non-fiction. The amount of time I’ve spent trying to filter out movies whose plots will creatively inspire me as well as the cinematography/visuals of the filming itself is loooong and I need a shortcut on Netflix. I’m talking about films like Kill Your Darlings, Midnight in Paris, Basquiat, Sylvia, The Hours, Bukowski: Born into This, Dead Poet’s Society, Frances Ha, Stuck in Love, and Frida all being recognised for what they achieve and the common goal being celebrated. I hope there isn’t already a genre like this that exists or I’ll be both embarrassed and annoyed but I’m pretty sure I’d have come across it by this point given the amount of time I’ve spent googling ‘really good films about writers’, and getting questionable results.

If you were given the opportunity to direct, who would you cast in your dream movie?

Oh lordy loo okay well at the minute I really love Greta Gerwig so she would get the lead role and I have a massive weakness for seeing Daniel Radcliffe in anything that isn’t Harry Potter so I’d rope him in too. Owen Wilson could be in the background, sprinkling a little bit of that Wes Anderson vibe that he embodies so fucking wonderfully. I need more gals. Okay I choose Winona Ryder and Carey Mulligan and Emma Roberts. Oh I almost forgot about Hugh Grant, I know he’s probably a massive dickhead but he really melted my heart in Notting Hill and I just can’t fall out of love with him and his subtly hilarious mannerisms.

Who is your favourite woman character from Film or TV?

This is really hard so I’ll give one for each. In terms of film I really love Lisa in Girl, Interrupted. I swear Angelina Jolie is fucking amazing in that film and I think it’s really important that mental illness is portrayed brutally and this film really achieves that. I’m getting pretty sick of depression being romanticised whilst the seriousness of mental illness is dismissed, particularly where female roles are involved. Lisa’s character is hard-hitting and makes the viewer feel incredibly uncomfortable which is important. For TV I’d go with Poussey from OITNB, I mean it might seem like an obvious choice but that’s because she’s fucking mint. She warms my heart and I’m just so glad that such a large fan-base has the opportunity to resonate with a diverse group of empowered females. That scene where she’s describing what love is. There are no words for that.

I’m sorry my answers are already really long but I really must mention Elle Woods from Legally Blonde. That gal is sensational.

In your opinion, what is a seriously under-rated cinematic masterpiece?

Kill Your Darlings. I will forever big up this film.

Rank your top 3 films by your favourite director (if you have one!)

I’m going for the most obvious choice imaginable by saying Quentin Tarantino but sometimes the obvious is the best. He excites so many people and that’s important. He’s passionate enough to get himself known and he was probably the first person that made me even consider the directors role in a movie. Anywho my faves of his are probably:

What was the last film you watched?

I’ve been really struggling to concentrate on films recently so I haven’t been watching as many as I’d like to. I think the last one was probably Chef. It’s one of those easy-viewing movies that doesn’t take too much brain power and the soundtrack is funky which is often what initially draws me to a new film. The father/son storyline reminds me a little bit of the father’s role in Stuck in Love and I guess I’m just a real sucker for that kinda thing.

Arthur: Could I stay for a minute, please?

Arthur: Because it will reduce the proportion of my life that I spend feeling totally miserable

This is from Arthur (2011) and it’s hardly a ground-breaking quotation, but when I first watched that scene I probably cried. Sometimes the simplest of concepts resonate with people the most and when someone chooses not to overlook the obvious, I really dig it. Like, I’m pretty sure we’ve all had someone in our lives whose company makes us forget how miserable we are or have been and that’s really quite powerful.

And finally, what film are you most looking forward to in the near future?

My biopic. It’s gonna be really good. Watch this space.